A Xebec is a Mediterranean sailing vessel used mostly for trade. 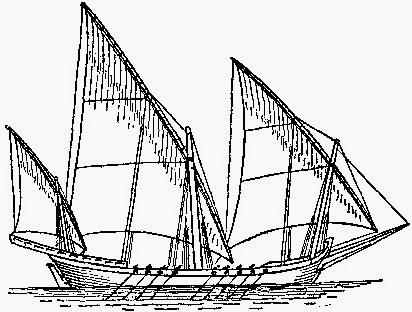 To me, they look like the typical three mast sailing ships i think of when i think of old seagoing vessels, and you can read more about them at Wikipedia.

This post is brought to you by the letter X, which is notoriously difficult because it doesn't want to start any common words, thus making me look up crazy things like old sailing ships.

It's also brought to you by the fact that i had to think fast and get something up for X before storms moved through, because we can't always count on having electricity when they do. (Edited to Add:  this was prophetic -- the storms cut power to a lot of us, and our generator quit.  Right now i'm at a local coffee place for my daily dose and some wifi.)

Today is:Biological Clock Day -- the "biological clock gene" that governs the`circadian rhythm in mice was isolated on this day in 1994Chicken-Tickling Day -- Fairy Calendar (Leprechauns)Cubicle Day -- again i say, ???Feast of Jamal(Beauty) -- Baha'iFestival of Floralia -- Ancient Roman Calendar (three day festival to Flora, goddess of flowers and vegetation)School Bus Driver's Day -- these longsuffering drivers put up with a lot, thank a school bus driver today!Gio to Hung Vuong Day -- Vietnam (National Day; celebrating the founding of the nation by Emperor Hung Vuong some three millenia ago)Great Poetry Reading Day -- make sure you read some great poetry todayHidaka Hibuse Matsuri -- Mizusawa, Iwate Prefecture, Japan (through the 29th; floats, child musicians, traditional costumes, and fun)James Monroe Birthday Celebration -- Charlottesville, VA, US (at his home, Ash Lawn-Highland)Kiss Your Mate Day -- guys, do not forget this one, in case she reads it somewhere on the internet; kiss her, then read her a great poemNational Blueberry Pie DayNational Day of Mourning -- Canada (In conjunction with Workers' Memorial Day and World Day for Safety and Health at Work, honoring those injured or killed on the job)National Heroes Day -- BarbadosRip Cord Day -- the first successful jump with a parachute that used a rip cord was this day in 1919 by Leslie Erwin of the U.S. Army Air CorpsSa die de sa Sardinia -- Sardinia, Italy (Sardinia Day, celebrating the uprising of 1794)Sense of Smell Day -- listed on different days on many websites; While celebrating, remember those with anosmia (diminished ability or totaly inability to smell)St. Peter Chanel's Day (Patron of Oceania)     Saint Pierre-Chanel Day -- Wallis and FortunaSts. Vitalis and Valeria's Day (Patrons of Thibodaux, Louisiana)Victory Day -- AfghanistanWorkers Memorial Day / World Day for Safety and Health at Work -- International (remembering all who have lost their lives or been injured on the job)Anniversaries Today:Maryland becomes the 7th US State, 1788Birthdays Today:Jenna Ushkowitz, 1986Jessica Alba, 1981Penelope Cruz, 1974Jorge Garcia, 1973Nicklas Lidstrom, 1970John Daly, 1966Elena Kagan, 1960Ian Rankin, 1960Nancy Lee Grahn, 1958Mary McDonnell, 1952Jay Leno, 1950Marcia Strassman, 1948Ann-Margaret, 1941Harper Lee, 1926Oscar Schindler, 1908Erich Salomon, 1886Lionel Barrymore, 1878Mifflin Wister Gibbs, 1828James Monroe, 1758Debuting/Premiering Today:"One Man's Family"(Radio), 1932Today in History:Nichiren Buddhism is founded, 1253Captain William Bligh and 18 crewmen from the HMS Bounty are set adrift, 1789Chinese and Irish laborers for the Central Pacific Railroad working on the First Transcontinental Railroad lay 10 miles of track in one day, a feat which has never been matched, 1869Azerbaijan  is added to the Soviet Union., 1920The first night game in organized baseball  history takes place in Independence, Kansas, 1930A vaccine  for yellow fever is announced for use on humans, 1932Thor Heyerdahl and five crew mates set out from Peru on the Kon-Tiki, 1947The Sino-Japanese Peace Treaty (Treaty of Taipei) is signed in Taipei, Taiwan between Japan and the Republic of China to officially end the Second Sino-Japanese War, 1952Charles de Gaulle resigns as President of France, 1969The Budapest Treaty on the International Recognition of the Deposit of Microorganisms for the Purposes of Patent Procedure is signed, 1977Millionaire Dennis Tito becomes the world's first space tourist, 2001According to the WHO, leading causes of death in the world include chronic illnesses such as heart disease, cancer and diabetes, 2011In recognition of democratic reforms, the European Union opens an office in Burma, 2012
Posted by messymimi at 2:00 AM

Labels: A to Z Challenge, xebec

I never heard of a xebec. That is a new thing I have learned today!

I hope the electricity comes back on soon. I hate it when it goes out for hours and hours.

Have a fabulous day my friend. ☺

hope you get your xtricity back soon! :)

Very creative use of X! Given my worrywart personality, especially in case of stressful things like storms and power outages, I mighta gone with Xanax... :)

Excellent X, my dear! I always struggle with that letter. I hope that your power is restored, I had heard that there was some nasty weather that was down your way, wondered if it had affected you. Now I know, I guess... : / Take care, and hope all gets happy kitten again!

Good job thinking ahead. I had no idea there was a ship called a Xebec. X really is a hard letter for A-Z. Enjoy your java and time on the wifi!

good for you looking up a real X word...and me? I cheated!

I like ships but I've never heard of this word. Thanks for the education.

prophetic -- you could be one of the X-Men then!! sorry, my inner comic nerd just waved all over your blog! ha
I think the whole reason I have avoided doing the A-Z challenge is due to the problematic final 2 letters. But if I had known about the sailing ships, because that is actually pretty cool. I used to go see the old Tall Ships when ever they came sailing up the St Lawrence Seaway, and it is quite the sight to see.