Just a couple of sweet kittens at the shelter: 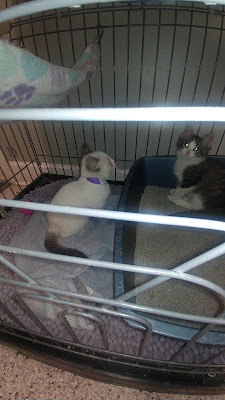 Poetry Monday was started by Diane at On The Alberta/Montana Border.  She and Jenny at Procrastinating Donkey take turns providing a theme each week. Mother Owl  and Merry Mae almost alway participate, too.  This weeks theme is Neighbors.
Your neighbors don't look like you,
Some unobservant people might say.
My response would be that they
Are bipeds with brains, just as we are.

Each has two eyes, one nose, one mouth,
Two ears, hair, arms, legs, they look just like us.

But, they might argue, the ones over there
Have much darker skin.

And, they might add, the ones on the other side
Are a different religion than most of us.

Also, there are the ones a few doors down
That speak another language as well as English!

My response would be, so what?
It just so happens that i like them that way.

We all get along.  We all have jobs.
We all have kids and lives and loves.

Our kids grew up playing together,
Were on the same neighborhood swim team.

We all have cars that break down,
And we have given each other rides.

All of us have had good times and bad times
and shared them, graduations and weddings and funerals.

And we are neighbors who like each other and if you don't like it,
Then please don't move here.  Thank you.

Lhabab Duechen -- Buddhism (Descending Day of Lord Buddha)
a public holiday in Bhutan, although the exact day off may vary

Married to a Scorpio Support Day -- remembering those married to Scorpios (like me!) and suffering because of it, and encouraging them too hide the flow charts and assert themselves today; sponsored by Wellcat Holidays

Old St. Peter's Basilica is consecrated, 326
The Japanese Emperor Kammy relocates the residence of Nara to Kioto, 794
William Tell shoots the apple off his son's head, 1307
The Holland/Zealand dikes break during a storm, resulting in thousands of deaths, 1421
The first English printed book, "Dictes & Sayengis of the Phylosophers", is published, 1477
Christopher Columbus first sights the island now known as Puerto Rico, 1493
Vasco da Gama reaches the Cape of Good Hope, 1497
The worst earthquake in Massachusetts Bay/Boston area, 1755
The first Unitarian Minister in the US is ordained in Boston, 1787
30 women meet at Mrs Silas Lee's home in Wiscasset Maine, to organize the Female Charitable Society, first woman's club in America, 1805
Mark Twain's story The Celebrated Jumping Frog of Calaveras County is published in the New York Saturday Press, 1865
National Woman's Christian Temperance Union organizes in Cleveland, 1874
Standard time zones are formed by railroads in the US and Canada, 1883
The first newspaper Sunday color comic strip is printed, in the NY World, 1894
Britain flies its first sea plane, 1911
Lincoln Deachey performs the first airplane loop-the-loop, over San Diego, 1913
Sigma Alpha Rho, a Jewish high school fraternity, is founded in Philadelphia, Pennsylvania, 1917
Release of the animated short Steamboat Willie, the first fully synchronized sound cartoon, directed by Walt Disney and Ub Iwerks, featuring the third appearances of cartoon characters Mickey Mouse and Minnie Mouse, 1928
Off the south coast of Newfoundland in the Atlantic Ocean, a Richter magnitude 7.2 submarine earthquake, centered on Grand Banks, breaks 12 submarine transatlantic telegraph cables and triggers a tsunami that destroys many south coast communities in the Burin Peninsula, 1929
New York City's Mad Bomber places his first bomb at a Manhattan office building used by Consolidated Edison, 1940
In the United States, the North American Free Trade Agreement (NAFTA) is ratified, 1993
HIP 13044 b, a planet that was formed in another galaxy, is discovered in the Helmi Stream, 2010
Pope Tawadros II of Alexandria becomes the 118th Pope of the Coptic Orthodox Church of Alexandria, 2012
NASA launches the MAVEN probe to Mars, 2013
Posted by messymimi at 12:00 AM