Rory Bore at Ink Interrupted hosts the Tuesday Coffee Chat, and this week the topic is, Three things on your Summer To Do List.

One of them is on the to-done list, and that is to go on vacation.  It was a quiet, restful one this time, which is unusual for us, and a nice change of pace.

What else is up for the summer?  Frankly, once the wedding is over this weekend, not much.  Work will have to be done regularly because there are these things called "bills" that keep coming in.  Some of them also keep increasing.

Summer is spent mostly trying to stay cool and praying we do not have any major storms.

The library is a great place to go in the summer, so i may try getting there at least once a week.

When the children were young, we did VBS and were at the library 2 or three times a week and had swim team and lots planned.  Now that i'm looking at this topic, i feel old and boring.

Once autumn comes, and it's not hot enough to accidentally brand yourself with your seatbelt every time you get in the car, i wouldn't mind going to the local swamp nature center, as it's been a long time since i've been.  In fact, i'm going to plan it out and do it.  Also, i want to plan a weekend trip to visit a friend later in the year.

Summer has become a great time, i think, to plan indoor activities.  It's in the autumn that i will come alive again.

And now, a bit of random news from around here, linking up with Stacy's Random Thoughts at Stacy Uncorked.

The recent rains from Cindy were great for the blooming things. 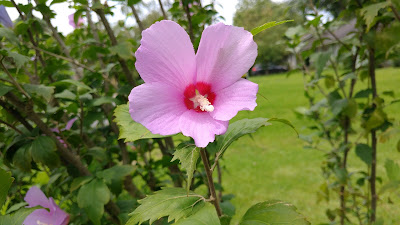 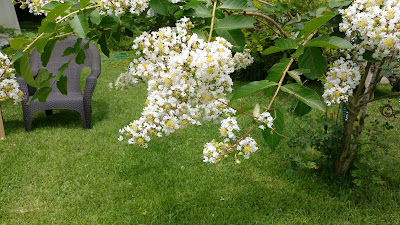 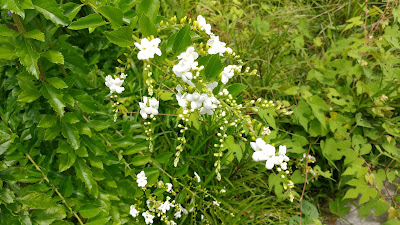 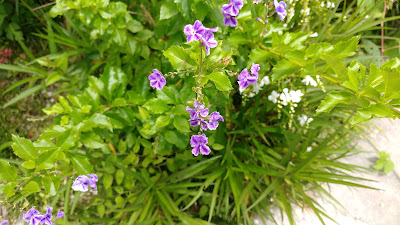 Ms. S, my Monday lady, is having trouble and i am very concerned.  She seems more frail right now than ever before, even than right after her last surgery.

Mr. B, for whom i work every other Saturday, has taken a break from sorting all the screws and nails and bolts and etc. in the workshop and we are doing projects.  Well, he is doing projects, and i am cleaning the things he wants to work on, since most of them are covered in grime.  Last Saturday i unloaded the two storage closet floors and swept them, and cleaned and polished a wine cooler he is going to sell on Craigslist and an old dentist's cabinet he is going to convert to yet another tool storage unit.  The one thing that man has is tons and tons of is tools.

Finally, we are back in business, the kitten business, that is.  Two girls, mama was run over, they are doing well.

National Columnists' Day -- on the fourth Tuesday of June each year, set aside some time to thank your favorite newspaper columnists, whether local or syndicated

General James Wolfe begins the siege of Quebec, 1759
Joseph Smith, Jr., founder of the Church of Jesus Christ of Latter Day Saints, and his brother Hyrum Smith, are murdered by a mob at the Carthage, Illinois jail, 1844
George Dixon becomes the first black world boxing champion in any weight class, while also being the first ever Canadian-born boxing champion, 1890
The first solo circumnavigation of the globe is completed by Joshua Slocum from Briar Island, Nova Scotia, 1898
Sailors start a mutiny aboard the Russian Battleship Potemkin, denouncing the crimes of autocracy, demanding liberty and an end to war, 1905
Capt. Lowell H. Smith and Lt. John P. Richter perform the first ever aerial refueling in a DH-4B biplane, 1923
The United States decides to send troops to fight in the Korean War, 1950
The world's first nuclear power station opens in Obninsk, near Moscow, 1954
The world's first ATM is installed in Enfield, London, 1967
The President of Uruguay dissolves Parliament and heads a coup d'état, 1973
U.S president Richard Nixon visits the U.S.S.R., 1974
France grants independence to Djibouti, 1977
The current international treaty defending indigenous peoples, ILO 169 convention, is adopted, 1989
Slovenia, after declaring independence two days before, is invaded by Yugoslav troops, tanks, and aircraft, starting the Ten-Day War, 1991
Bill Gates resigns from Microsoft to focus on his charity work, 2008
The first democratic election in the history of Guinea is held, 2010
Tests show radioactive cesium is present in small quantities in residents of Iitate and Kawamata, Fukushima, towns located 25 miles from the Fukushima Daiichi nuclear power plant, 2011
NASA launches IRIS, the Interface Region Imaging Spectrograph, a space probe to observe the Sun, 2013
Posted by messymimi at 12:00 AM