...Christmas tree, then an Easter tree, and now: 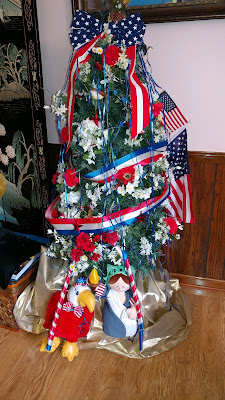 Delores at Muted Mumblings started Words for Wednesday, giving prompt words to use for a story.  This week's prompts and my story:

or you could use this phrase
MANIACAL MEGALOMANIAC

He always thought of grandpa as a MANIACAL MEGALOMANIAC, but she knew her grandfather-in-law was just a tormented old man.

Yes, the house was FILTHY and DISGUSTING from years of hoarding.  The DOMINANT color of the CARPET was dirt, a pile of old, now unwearable BOOTS was the first thing you saw when you walked in the door.  He had come to a point where he greeted everyone who came to the door with his old CARBINE, just knowing it was those awful people from the county coming to try to tell him, again, he couldn't live this way and they were going to move him into an assisted living place.

He had years of grit and DETERMINATION behind him when he said he was not leaving his home, and she knew a more TACTICAL approach was needed.

She showed up at noon with nothing more than a home cooked dinner, because in the old South when he grew up you had dinner at noon, and a feather DUSTER.  She reminded him that grandma had always been FINICKY about how she kept the house, and he smiled and reminisced and admitted that he wasn't as good keeping it as she had been.

Her offer to bring dinner and work with him on the house for an hour a day was met with suspicion at first, but day by day they worked and laughed together and the grime began to give way.

By the time he died, it was no MAGAZINE spread quality home by any stretch, but it was livable again, and he could DISPLAY his and grandma's home without shame.

All or Nothing Day -- no history on this one, but it's supposed to be the day you decide to live as if it's going to be your last!

Aunt and Uncle Day -- originally proposed on this day in 2005 by Florida State Senator Tony Hill; if you have aunts and uncles you love, why not give them a call today

Green Corn Ceremony -- Native Americans (thanksgiving for the maize harvest; these are celebrated by many tribes in many different ways and are not generally scheduled as they depend on how the corn grows; some have with rites including a Thanksgiving Prayer, Confession Chant, and Feather Dance; the Santa Ana Pueblo holds an annual Corn Festival on this date each year that is open to the public)

One Voice Day -- readings around the world of the Universal Peace Covenant, sponsored by the School of Metaphysics

Oregon Brewers Festival -- Portland, OR, US (81 microbreweries from across the nation showcase their best, including rare, hard-to-find, and exotic beers; through Sunday)

Racial Desegregation Day -- date in 1944 the US Army ordered training camp facilities desegregated, and the date in 1948 President Truman signed the order integrating the US armed forces

Signing of the American's With Disabilities Act, 1990
New York becomes the 11th US State, 1788
The United States Postal Service is founded, 1775

The first recorded women's cricket match took place near Guildford, England, 1745
The birth of what would later become the United States Post Office Department is established by the Second Continental Congress, 1775
The Surrey Iron Railway, often considered the world's first public railway, opens in south London, 1803
In California, the poet and American West outlaw calling himself "Black Bart" makes his last clean getaway, 1878
Premiere of Richard Wagner's Parsifal at Bayreuth, 1882
Publication of the Unua Libro, founding the Esperanto movement, 1887
United States Attorney General Charles Joseph Bonaparte issues an order to immediately staff the Office of the Chief Examiner (later renamed the Federal Bureau of Investigation), 1908*
King Edward VIII, in one of his few official duties before he abdicated the throne, officially unveiled the Canadian National Vimy Memoria, 1936
The Labour Party wins the United Kingdom general election of July 5 by a landslide, removing Winston Churchill from power, 1945
U.S. President Harry S. Truman signs the National Security Act into United States law creating the Central Intelligence Agency, Department of Defense, Joint Chiefs of Staff, and the National Security Council, 1947
U.S. President Harry S. Truman signs Executive Order 9981 desegregating the military of the United States, 1948
Fidel Castro leads an unsuccessful attack on the Moncada Barracks, thus beginning the Cuban Revolution, 1953
Syncom 2, the world's first geosynchronous satellite, is launched from Cape Canaveral on a Delta B booster, 1963
The National Assembly of Quebec imposes the use of French as the official language of the provincial government, 1977
A federal grand jury indicts Cornell University student Robert T. Morris, Jr. for releasing the Morris worm, thus becoming the first person to be prosecuted under the 1986 Computer Fraud and Abuse Act, 1989
Mumbai, India receives 99.5cm of rain (39.17 inches) within 24 hours, bringing the city to a halt for over 2 days, 2005
Over 92,000 classified documents detailing incidents related to the war in Afghanistan are released by Wikileaks in the largest leak in U.S military history, 2010
President of France, Francois Holland finalizes a deal with Ivory Coast President Alassane Ouattara to forgive $4.7 billion dollars in debt incurred by the Ivory Coast when it was a French Colonial Power, 2012

*Yes, the grand-nephew of Napoleon I started the FBI -- I'm not sure why that seems so odd to me.
Posted by messymimi at 12:00 AM

I love it that today is Groovy Chicken Day! I'm celebrating!

I love it! Very patriotic. Will you do apples in September?

What a lovely story of patience and understandding. I can't get over how many different directions people are going with the words this week.

What a fun thing to do. I love this idea and many do this very thing. Awesome.

Have a fabulous Wordless Wednesday, my friend. ☺

Very interesting story Mimi. You are a very patient person and and a very loving one.
See ya my friend.

LOVE your use of Delores' prompts. Grandpa was a very lucky man. And his grand-daughter in law a lovely woman.

Mimi, you are awesome. I love this idea and photo!
I have never heard of this writing prompt, but, well done, my friend! HUGS!

All or nothing day? Not familiar with that one. Will we be seeing a "Thanksgiving Tree" in November?

I like what you did with the Words for Wednesday prompts, well written and true to life, so many of our elderly are in this same position, where a little love, patience, and understanding is all they want.

I really love this. And the love between them!