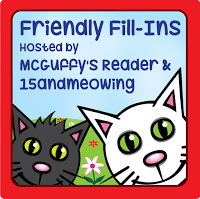 1. As a child, my favorite playground activity was swinging on the swingset.  It still is my favorite, but i don't do it often and only if no one will see me.

2. For breakfast, i have coffee.  Most days i don't eat until after work.

3. An instrument i would like to play is either cello or ukulele.  For years i've wanted to learn either or both.

4. I always try to get wherever i am going early, because i believe it's important to be punctual.  In fact, unless i am unavoidably delayed by something beyond my control (when the kids were little it was always the diaper bomb as we tried to load the car), i believe that if i'm not early i am late.

Eli of Coach Daddy has published "Our Greatest Adventures" in his monthly Six Words post.  Check it out!

Aberdeen International Youth Festival -- Aberdeen, Scotland (talented young people in all areas of performing arts and from around the world participate; through Aug. 5)

Antique Power and Steam Exhibition -- Burton, OH, US (over 100 antique engines show they can still cut the mustard -- or saw the logs, thresh the grain, etc.; through Sunday)

Gilroy Garlic Festival -- Gilroy, California (the part of the world that grows more of our garlic than anywhere else, where you can almost marinate a steak just by hanging it on the clothesline in the breeze, celebrates the stinky rose; through Sunday)

International Tree Climbing Championships and Arbor Fair -- US National Arboretum, Washington, D.C., US (sponsored by the International Society of Arboriculture, and designed to simulate working conditions of professional arborists, with five different qualifying events; through August 2)

Langholm Common Riding -- Langholm, Dumfries and Galloway, Scotland (a traditional riding of the bounds, with lots of celebrating, begins 5am and ends 9:30pm)

Mutomboko Ceremony -- Luapula Province, Zambia (among the Lunda of the Kazembe kingdom, a rich celebration of African cultural heritage, traditional dances and music, and sponsored by the Royal Family; through tomorrow)

UFO Days -- Elmwood, Wisconsin, US (Wisconsin's UFO capital, visit the petting zoo, shop at the community wide thrift sale, take part in the fun run, softball games, medallion hunts, bed races, and dances; watch the crowning of Miss Elmwood, the tractorcade, the car and truck show, the nightly fireworks, and stage bands; let the kids have a ball in the greased pig race and kiddie water fight; enjoy the Knights of Columbus pancake breakfast and the bake sale; and no need to miss church Sunday morning, bring a lawn chair for the ecumenical service so you don't miss a moment of the fun and excitement! through Sunday)

Thomas Cromwell is executed at the order of Henry VIII of England on charges of treason, 1540
Bermuda is first settled by Europeans, survivors of the English ship Sea Venture en route to Virginia, 1609
Maximilien Robespierre is executed by guillotine in Paris during the French Revolution, 1794
Welsh settlers arrive at Chubut in Argentina, 1865
The 14th Amendment to the Constitution of the United States, guaranteeing due process and establishing citizenship for African Americans is certified, 1868
First flight of the Boeing B-17 Flying Fortress, 1935
The Metropolitan Police Flying Squad foils a bullion robbery in the "Battle of London Airport", 1948
The Tangshan earthquake measuring between 7.8 and 8.2 moment magnitude flattens Tangshan, the People's Republic of China, killing 242,769 and injuring 164,851, 1976
Andorra joins the United Nations, 1993
Australian Ian Thorpe becomes the first swimmer to win six gold medals at a single World Championships, 2001
The Provisional Irish Republican Army calls an end to its thirty year long armed campaign in Northern Ireland, 2005
The U-550, a sunken German U-Boat, is discovered off the cost of Massachusetts, 2012
Posted by messymimi at 12:00 AM

I love your little kitty. Mimi, I think we are truly kindred spirits! Let's go swinging, drink coffee, and make plans to form a band that will never be late. Holy cats! We are so much alike! HUGS! have a great weekend. And, thanks for always being You.

They do fight sleep, but when they sleep, they sleep so very well.

Such a cutie kittie! Have a beautiful day!

Such a pretty kitty... but, you're right, they're not easy to sleep unless they want to.

My favorite playground activity was running. I was a thin, small child growing up and when the big girls went after me in soccer, they could try but they never could catch me.

For breakfast, definitely coffee. I can't eat food right away. Brunch after 10 AM, yes.

I've been told I have piano hands so I'd like to play the piano. A guitar would be second.

I always try to be truthful because I hate it when people lie to me.

Such a cute kitten. Thank you for participating in the fill-ins, great answers. I love to swing too :) You are never too old to learn something new so you should take some cello lessons. Always a good idea to be early, I have been told I am punctual so I guess that is better than late. Nice answer to the 6 words too! Have a great weekend!

what a sweet tuxedo kitty! You take such care of each and every one!

Sleeping is hard when there's so much excitement going on.

Punctuality has always been important to me, too. I like to arrive early. It doesn't always work out that way and once, I arrived over an hour early because there was a mixup in the start time of the BYU meeting. Boy was I embarassed and the hostess inconvenienced!

That Tangshan earthquake sounds tremendous. Have you ever heard of the New Madrid earthquakes here in the United States? I never learned about them in school, but I don't know why they didn't teach us about something so massive as that!

That is a beautiful little kitty. :)

Have a blessed weekend.

They do fight sleep, but when they sleep, they sleep so very well.