Here’s Why (Awww Monday), Inspiring Quote of the Week, and Ugh! A Bug! (Poetry Monday) If you ever want to know why we volunteer with animal rescue, here’s your answer: 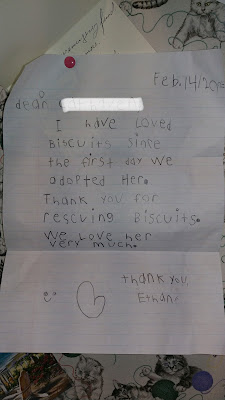 If you cannot read it, it says,

Feb. 14, 2020
Dear (NameOfShelter),
I have loved Biscuits since the first day we adopted her.
Thank you for rescuing Biscuits.
We love her very much.
(smiley face)(heart) Thank you,
Ethan

Poetry Monday was started by Diane at On The Alberta/Montana Border.  She and Jenny at Procrastinating Donkey take turns providing a theme each week.   Charlotte/Mother Owl almost always participates, too.  This week the theme is Bugs.

Summer is the season
To go outside and play,
While there you will see bugs
‘Cause out is where they should stay.
But sometimes rogues will wander
The wild things like to roam,
And in their quest for foodstuff
Will come into your home.
Some of them are germy
Have a fly swatter near,
Some are really harmless,
Set them outside with no fear.
But some of them are awful,
To them i give no aid,
But just say “ugh! a bug!”
And grab a trusty can of Raid!

Feast Day of Saints Peter and Paul -- Christian
St. Paul, Patron of Greece, Malta, rope makers, tentmakers, upholsterers
St. Peter, Patron of clockmakers, fishermen, Russia; against fever, foot trouble, wolves
a recognized holiday in Chile; Holy See; Italy; Malta[l-Imnarja]; Peru; GR and TI, Switzerland; Wallis and Fortuna
Haro Wine Festival -- Haro, LaRioja, Spain (a festival that includes a Battle of Wines, where wine is thrown from buckets at opposing teams; on the feast day of the city's patron, San Pedro)
Rat-Catcher's Day -- often cited because some of the earliest legends of the Pied Piper claim he took the children on the Feast Day of Sts. Peter and Paul

An Irish monastic chronicler records a solar eclipse, 512
Jacques Cartier makes the European discovery of Prince Edward Island, 1534
The Globe Theatre in London, England burns to the ground, 1613
Alexander Macdonell and over five hundred Roman Catholic highlanders leave Scotland to settle in Glengarry County, Ontario, 1786
Coal is discovered on Vancouver Island, 1850
Ninety-nine people are killed in Canada's worst railway disaster near St-Hilaire, Quebec, 1864
France annexes Tahiti, 1880
The first known recording of classical music, Handel's "Israel in Egypt", is made on a wax cylinder, 1888
Street railway in Ottawa, Ontario, Canada, commences operation, 1891
Doukhobors burn their weapons as a protest against conscription by the Tsarist Russian government, 1895
France grants 1 km² at Vimy Ridge "freely, and for all time, to the Government of Canada, the free use of the land exempt from all taxes," 1922
Joseph-Armand Bombardier of Canada receives a patent for sprocket and track traction system used in snow vehicles, 1937
Isabel Perón is sworn in as the first female President of Argentina, 1974
The Seychelles  become independent from the United Kingdom, 1976
The space shuttle Atlantis docks with the Russian Mir Space Station for the first time, 1995
Two car bombs are found at Piccadilly Circus, in the heart of London, 2007
News that European Union members agree on a deal to help some struggling Eurozone members causes world stock markets to soar, 2012

The Beijing Times reports that up to 30% of the Great Wall of China has disappeared, partly due to natural forces of decay and partly due to people stealing bricks, 2015
Iraqi forces retake the remains of the destroyed Great Mosque of al-Nuri from the Islamic State; it was the symbolic site where their leader had declared a "caliphate", 2017
Posted by messymimi at 12:00 AM