Just because Sandee, of Comedy Plus, has quit hosting a Silly Sunday blog hop, don't expect me to quit telling Cajun jokes.

Recently, i was with someone who is always finding fault and being a bit negative.  This person, not a member of my family or a close friend, is the kind who would find a reason to criticize St. Paul if he showed up to preach on Sunday.   She looks for faults to find and i am glad i do not have to suffer her company often.

Dey be jes' walkin' down by de water, talkin' an' watchin' de waves in de sunset, when dis absolute goddess come walkin' toward dem.  She have de perfec' model body, an' she be wearin' de white bikini dat barely be dere.

O' course, Boudreaux and Thibodeaux done stop talkin' an' be starin', dey mouths hangin' open, an' dey watch her walk pas', an' as dey turn to keep walkin' Clothile ax, "Did you notice?"

An' Clothile say, "Mais, you din't even notice!  She had flat feet!"

Mr. BA's garden bloomed, and many of his plants are gearing up to bust out in bloom again: 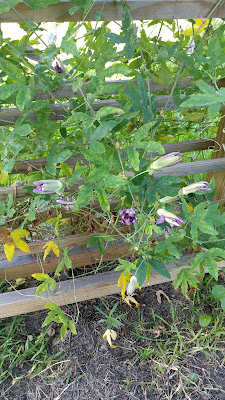 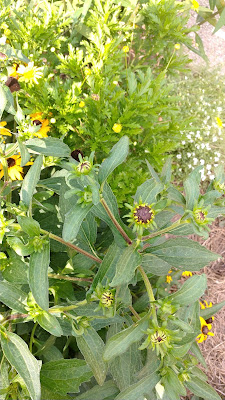 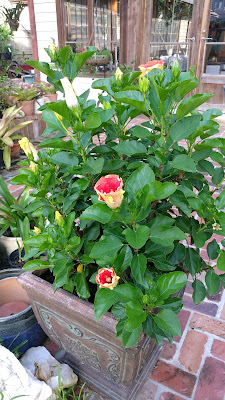 He also has a water cypress tree that obligingly produces many baby cypress trees each year, which he digs up, pots, and sells:

Eastport Fourth of July and "Old Home Week" -- Eastport, ME, US (bounded on all sides by the Bay of Fundy and Canadian islands, the celebration runs through the 4th)

Falconry Festival -- El Haouaria, Tunisia (four days of celebrating the art of falconry, which is passed from fathers to sons in "the country of the eagle", with breeders from around the world)

Punxsutawney Ground Hog Festival -- Punxsutawney, PA, US (through next Saturday; because the groundhog is worth more than just one cold day in February!)

Tiberius Julius Alexander orders his Roman legions in Alexandria to swear allegiance to Vespasian as Emperor, 69
La Noche Triste: a joint Mexican Indian force led by the Aztec ruler Cuitláhuac defeat Spanish Conquistadores led by Hernán Cortés, 1520
Lexell's Comet passed closer to the Earth than any other comet in recorded history, approaching to a distance of 0.0146 a.u., 1770
American privateers attack Lunenburg, Nova Scotia, 1782
A system of the civil registration of births, marriages and deaths is established in England and Wales, 1837
U.S. Postage stamps went on sale for the first time, 1847
In the first instance of photojournalism, a French photographer's daguerrotypes of Paris riots were turned into woodcuts so as to be published in the weekly newspaper L'Illustration Journal Universel on this date in 1848
Keti Koti (Emancipation Day) in Suriname, marking the abolition of slavery by the Netherlands, 1863
The British North America Act of 1867 takes effect as the Constitution of Canada, creating the Canadian Confederation and the federal dominion of Canada; Sir John A. Macdonald is sworn in as the first Prime Minister of Canada, 1867
The Philadelphia Zoological Society, the first US zoo, opens; admission twenty-five cents for adults and ten cents for children, 1874
The world's first international telephone call is made between St. Stephen, New Brunswick, Canada, and Calais, Maine, United States, 1881
SOS is adopted as the international distress signal, 1908
Grant Park Music Festival begins its tradition of free summer symphonic music concert series in Chicago's Grant Park, which continues as the United States' only annual free outdoor classical music concert series, 1935
NBC makes the first scheduled television broadcast, 1941
Tokyo City merges with Tokyo Prefecture and is dissolved; since then, no city in Japan has had the name "Tokyo" (present-day Tokyo is not officially a city), 1943
The merger of two princely states of India, Cochin and Travancore, into the state of Thiru-Kochi (later re-organized as Kerala) in the Indian Union ends more than 1,000 years of princely rule by the Cochin Royal Family, 1949
Zip Codes are introduced for the U.S.mail, 1963
The first color television transmission in Canada takes place from Toronto, 1966
The European Community is formally created out of a merger with the Common Market, the European Coal and Steel Community, and the European Atomic Energy Commission, 1967
Sony introduces the Walkman, 1979
O Canada officially becomes the national anthem of Canada, 1980
German re-unification: East Germany accepts the Deutsche Mark as its currency, thus uniting the economies of East and West Germany, 1990
The People's Republic of China resumes sovereignty over the city-state of Hong Kong, ending 156 years of British colonial rule, 1997
Saturn orbit insertion of Cassini-Huygens begins at 01:12 UTC and ends at 02:48 UTC, 2004
Smoking is banned in all indoor public spaces in England, 2007
The oldest European remains of a white man are discovered in Australia; the Manning River Skull may belong to a man born in 1650, predating the country's history that Captain James Cook was the first to land on Australia's east coast in 1770, 2013
Posted by messymimi at 12:00 AM