Yesterday at Grandma's house, Uncle P was trying to play with Lulu.  As long as he held the toy, she wanted it.  When he would put it down or throw it, however, she lost interest.

"What kind of part retriever are you?" he wanted to know, as she would flop down and refuse to even take a step toward whatever toy she had wanted a moment before when it was in his hands.

An' Boudreaux say, "Not 'zackly a problem, more like som'pin I don' see befo' in trainin' a dog.  He be bringin' back stuff I not done thrown. Yest'day he done brung back a sheet an' pillowcase."

So Thibodeaux say, "You be goin' break him o' dat?" 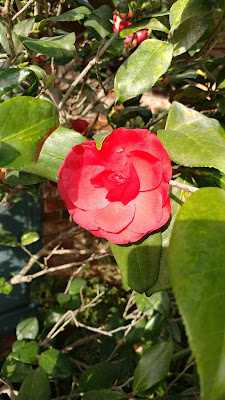 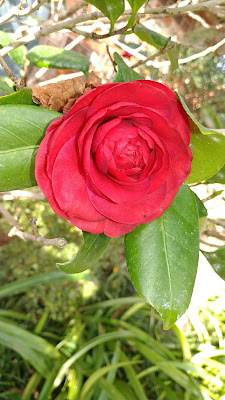 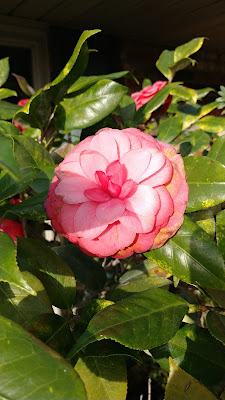 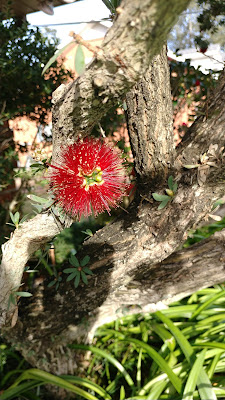 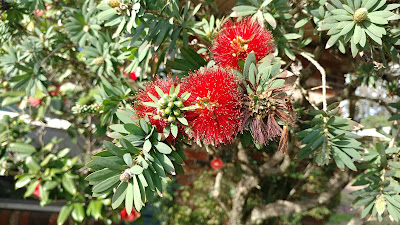 I wonder whether the Poe Toaster has gone to join him?
Love those garden photos - and yes the bees do love Bottle Brush.

Love the flowers and I almost didn't see the bee :)

Now that is a good dog!

Bottle brush! I never saw a flower with a more fitting name - so funny and so beautiful. Thanks.
And thanks for the lists. Just to prove I read them: You misspelt Il Trovatore the second time you mentioned it ;)
Is misspelt not a word? My spell-checker insist it's wrong, but I can't find out what is correct then - misspelled maybe, as my spell-checker accepts this, it just sounds wrong to me.

Those flowers sure are pretty, maybe Lulu could fetch you some!

Thanks to your list, Thelma & I celebrated National Popcorn Day!
(I also tried to interest her in camel wrestling but it just didn't take.)

I am beginning to like Lulu! Beautiful flowers from your Grandma's.