Like I Done Say (Cajun Joke), and Sunday Selections

Yesterday, Grandpa started the extra generator he keeps on hand in case the main one quits.  He tried to do that once a month to both test it and make sure it doesn’t freeze up.

He started it and left for the store.  As he was heading out, Grandma said, “Don’t leave it running while you are gone!”

Of course, something happened.  There was a plastic sheeting he kept over it, and he didn’t secure it far enough away.  Grandma heard a terrible noise coming from the machine and went out to find the plastic had been sucked up into the engine.  She ripped it out, but did not know how to turn the contraption off.

When Grandpa came home, Grandma gave him an earful.  “I told you not to leave something running while you are gone, especially if I don’t know what to do with it if something goes wrong!”

A few hour later, Sheriff Thibodeaux done call him an’ say, “De wil’life ranger done want to talk to you ‘bout de ‘gator you done kill, he be at de home owner house.”

An’ Boudreaux say, “De home owner done say it be eatin’ his chickens.”

An’ Boudreaux say, “Mais, like I done tole you!” 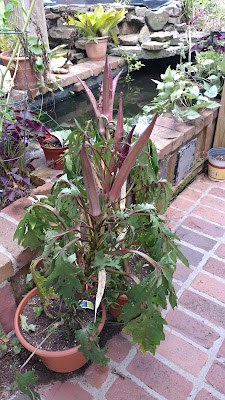 He hates green clover, but goes out of his way to cultivate the reddish purple variety: 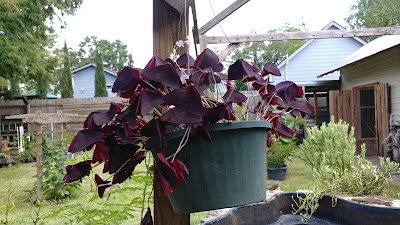 Now for a few things around my own house that bring me joy.

My smiling sponge makes me smile when i do the dishes: 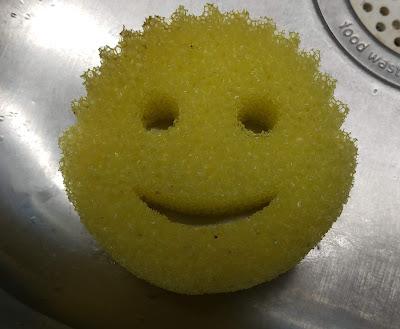 This coffee cup was a gift from my best friend back when i was in high school (back when Hector was a pup).  It is my favorite and i still use it: 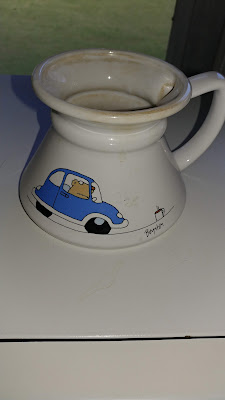 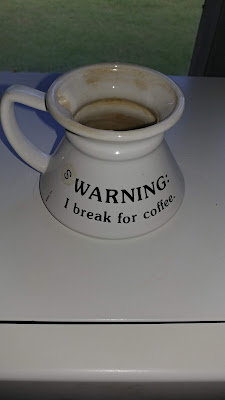 This watercolor was purchased from my client Ms. S's estate sale when she downsized.  It hasn't been framed yet, but i hope soon: 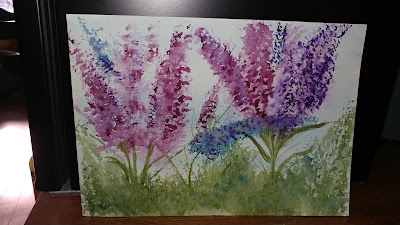 A few items from the curio cabinet (some of which i may have shown before, but please indulge me):

Festival of Domhnach Chrom Dubh -- Ireland (also called Festival of Lughnasa or Garland Sunday, Black Chrom's Sunday, associated with the god Lugh and connected to the festival of Lammas; also connected to John Barleycorn, the personification of the grain, who is killed by being harvested at this time; many honor St. Patrick's Fast by making a pilgrimage to Croagh Patrick, where he fasted until he overcame the pagan deity Crom Cruach [Crom of the Reek])

Loch-mo-Naire Pilgrimage -- Loch mo Naire, Scotland (tonight from midnight to 1am tomorrow is the magical hour, complete the ritual there to be healed by the waters because of magic stones in the water that a Celtic priestess put there)

National Doll Day -- US (another with its own Facebook page)

National Friendship Day -- US (designated by Congress in 1935)

Sisters' Day® -- celebrating the bond between sisters, as begun by Tricia Eleogram; a wiki page on how to celebrate this day

Iliden -- Bosnia-Herzegovina; Ukraine; other Slavic countries where he is titled St. Ilia

Philip II of Macedon leads his army to defeat the combined forces of Athens and Thebes in the Battle of Chaeronea, which secured Macedonian hegemony in Greece and the Aegean, BC338

Hannibal leads his Corinthian army to defeat the superior forces of Rome, BC216

Henry Hudson sails into what it is now known as Hudson Bay, thinking he had made it through the Northwest Passage and reached the Pacific Ocean, 1610

Wild Bill Hickok meets his death; shot in the back while playing poker, his hand, a pair of Aces and a pair of eights, is now called "Dead Man's Hand", 1876

The positron (antiparticle of the electron) is discovered by Carl D. Anderson, 1932

Pakistan is re-admitted back into the Commonwealth of Nations, 1989

Iraq invades Kuwait, setting the stage for the Gulf War, 1990

Two previously unknown works by Mozart - a concerto movement and a prelude, are performed in Salzburg, Austria, 2009

The U.S. Government estimates the Deepwater Horizon oil spill dumped nearly 5 million barrels of oil into the Gulf of Mexico, 2010

The first footage of white giraffes (giraffes with leucism) is posted by the Hirola Conservation Program in north eastern Kenya, 2017

Archaeologists confirm they have found the oldest library in Germany, in Cologne, dating back to 2AD and possibly holding as many as 20,000 scrolls, 2018

Saudi Arabia announces it is enacting news rules for women including allowing them to travel independently abroad without a male guardian's permission, 2019