Where the Biddies Go (Cajun Joke) and Sunday Selections

Grandma has finally left the house for something other than a church service.  She is now back to going to the beauty shop, although only once a month instead of once a week as before.  It's an arduous process.  Clients have to wait in their vehicles, send a text when they arrive, and wait to be escorted in.  The beautician has to walk each client out of the building, then go back in and sanitize the entire area, chair, the surrounding floor, all of her equipment and the sink and tables and all.  Then she goes and escorts the next client in, and she's only allowed to see a certain number of clients each day.

Grand-mère Boudreaux done be fussin' 'bout wantin' get her hair cut an' set.  Clothile come in an' ax Boudreaux, "What you Mère be fussin' at?"

An' Boudreaux say, "She be fussin' bout the beauty parlor be close.  But she keep sayin' de name wrong.  Don't it be Kitty's Beauty Shop dat she go to?"

An' Grand-mère done hear him say dat an' she come in de room befo' Clothile can say nothin' and tell him, "Mais, non!  I done says it de way I means it!  It be Cutie's Biddy Shop!  'Cause Miss Kitty dat run de place be her a cutie, an' she done take care o' alla us ol' biddies an' make us pretty!"

Only a few selections today, as i have been very busy and have not snapped as many photos as usual.

Mr. BA asked me to mop out a portion of the shop, and gave me a mop and bucket.  Upon inspection, the bucket has a crack all of the way across the bottom.  He says, "Put it in the grass, run the hose to it, and use it just to rinse and wring out the water, and when you are done, you don't have to empty the bucket, it empties itself!" 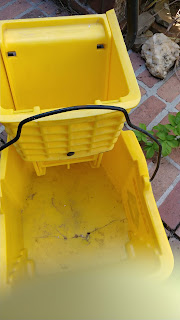 There's one invasive plant we are constantly trying to pull up at Mr. BA's house, and if you turn your back it is taller than you are in a blink.  It's rather pretty, but will take over if you let it: 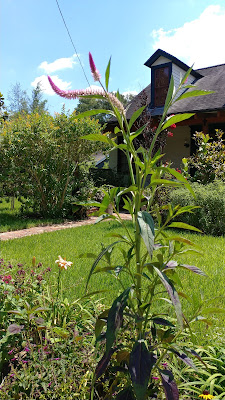 Mr. BA's large tomatoes didn't do well this year, but his cherry tomato plant has been giving him dozens and it still producing: 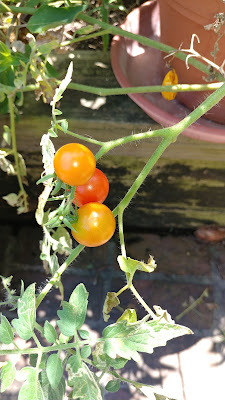 My not so great attempts at a close-up of a bee: 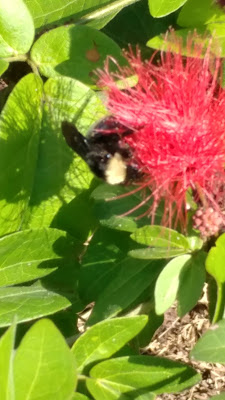 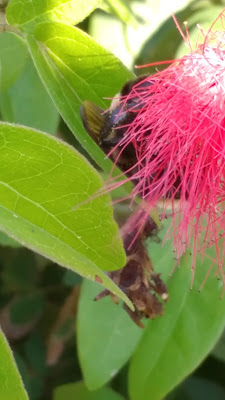 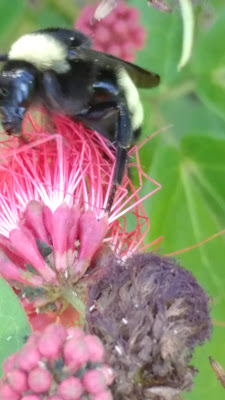 A couple of things Grandma is working on: 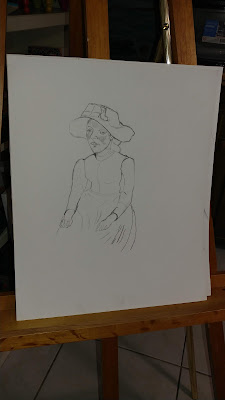 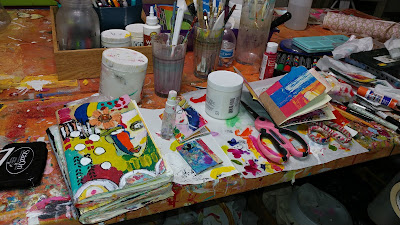 Don't Wait, Celebrate! Week -- 2nd full week of August each year; because spontaneous and frequent celebrations are good for you, says Patty Sachs

Battle of Pharsalus, in which Julius Caesar defeated Pompey, who fled to Egypt, BC 40
Bulgaria is founded as a Khanate on the south bank of the Danube after defeating the Byzantine armies of Emperor Constantine IV south of the Danube delta, 681
Start of construction of the Tower of Pisa, 1173*
Sistine Chapel opens, 1483
First horses arrive in Hawai'i, 1803
The Webster-Ashburton Treaty is signed, establishing the United States-Canada border east of the Rocky Mountains, 1842
Thoreau's Walden is published, 1854
Thomas Edison receives a patent for a two-way telegraph, 1892
Betty Boop makes her debut in the cartoon, Dizzy Dishes, 1930
Mahatma Gandhi is arrested in Bombay by British forces, launching the Quit India Movement, 1942
The United States Forest Service and the Wartime Advertising Council release posters featuring Smokey Bear for the first time, 1944
Singapore is expelled from Malaysia and becomes the first and only country to date to gain independence unwillingly, 1965
Richard Nixon becomes the first President of the United States to resign from office, 1974
Wayne Gretzky is traded from the Edmonton Oilers to the Los Angeles Kings in one of the most controversial player transactions in ice hockey history, 1988
The Liberal Democratic Party of Japan loses a 38-year hold on national leadership, 1993
Tensions escalate between North and South Korea, when South Korea claims North Korea fired over 100 rounds of artillery into the Sea of Japan, 2010
David Rudisha of Kenya becomes the first athlete at the 2012 Summer Olympics to set a new world track record and secures the 800m gold medal, while Usain Bolt becomes the first person to win the 100m and 200m sprint in back to back Olympics, 2012
Nepal's parliament bans menstruation huts (comes into effect August 2018), 2017