Yesterday, Grandpa was again lamenting how quickly Grandma and Uncle P go through the little ice cream cups (single serve ice creams, about 4 ounces/113ml).  When i suggested he get gallons instead and let them scoop out as they need it, he said, "No, Grandma knows herself, she eats the whole thing, whether it's a small cup or a pint or quart or whatever.  This way, she only eats two or three small servings a day instead of two or three pints or quarts a day."

Clothile done be fussin' to Boudreaux 'bout not goin' to see the dietetic lady de traiteur (doctor) done tol' him go see.   Boudreaux be needin' lose a few poun', an' it jes' not be happen.

Clothile done ax how it went, an' Boudreaux say, "De dietetic lady done tol' me to use de play food to make me a plate o' food dat I t'ink be a good servin'. So's I done did dat, an' mais! she done tol' me what I done pick be jes' one servin' if'n I be's a fam'ly o' four!"

First up this week, selections from the garden of my Wednesday lady, Ms. G: 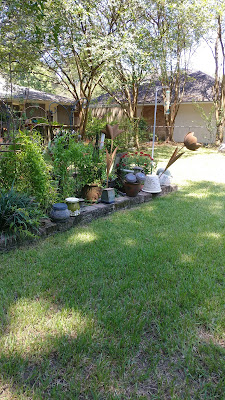 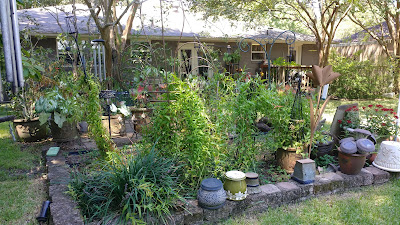 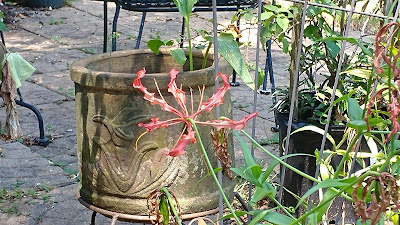 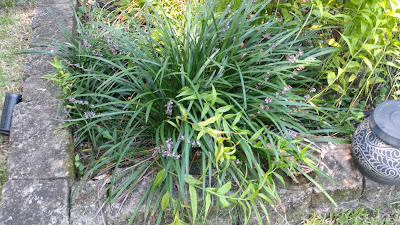 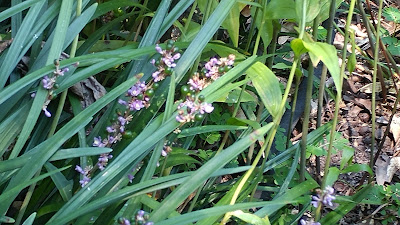 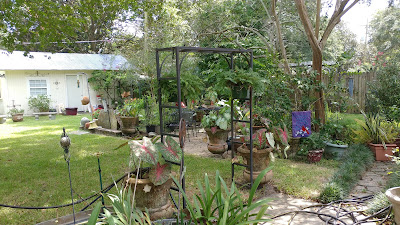 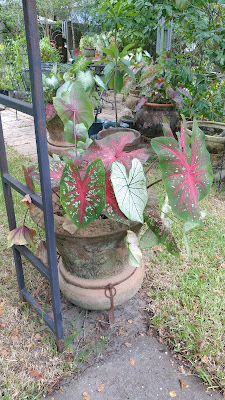 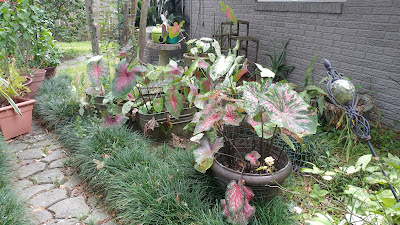 After standing still in the hot sun until i thought i might melt, i finally found a relatively cooperative bee: 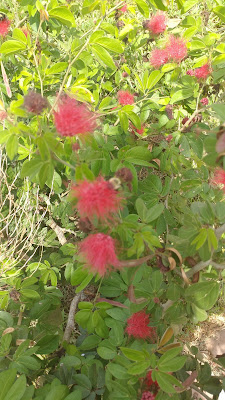 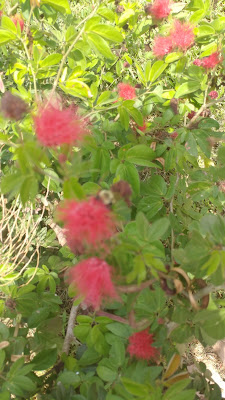 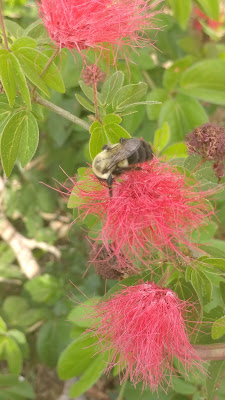 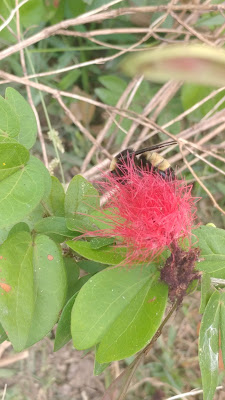 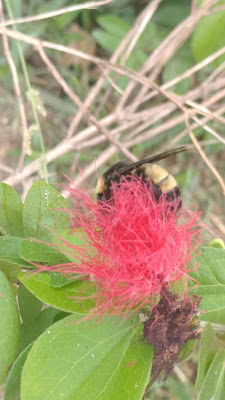 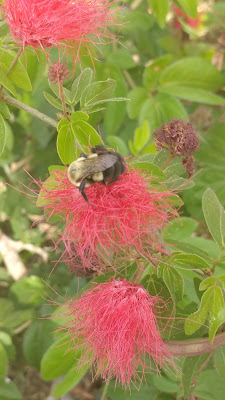 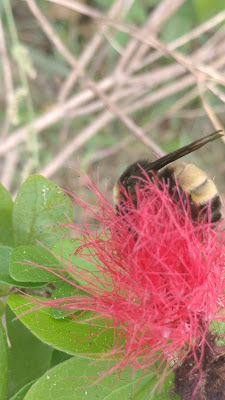 Uncle P. made some wood blocks for Grandma while he was building an end table, and she is using them to make her own homemade stamps for ink stamping: 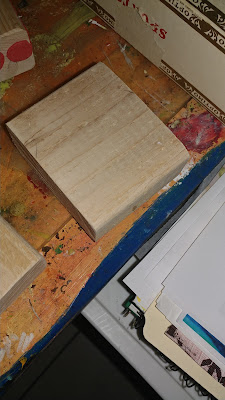 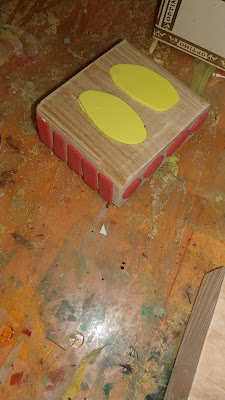 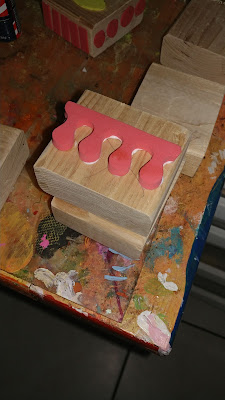 And from one of Grandma's fairy gardens, something we need more of: 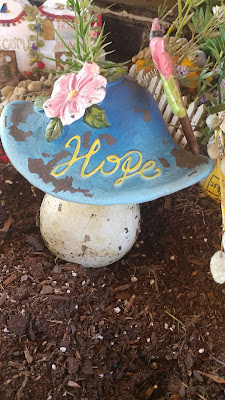 On the feast of Vulcan, Roman god of fire, Mt. Vesuvius begins to rumble, 79
Visigoths storm Rome, 410
Edward I executes William Wallace, Scottish patriot, for high treason, 1305
French explorer Jacques Cartier lands near Quebec City in his third voyage to Canada, 1541
Rabbi Joseph Caro completes his commentary of Tur Code, 1542
The St. Bartholomew's Day massacre of Huguenots in Paris begins, 1572
The first one-way streets open in London, 1617
Steamship service begins on the Great Lakes, 1818
Great Britain abolishes slavery in the colonies, 700,000 slaves are freed, 1833
Automobile tire chain is patented, 1904
The World Council of Churches is formed, 1948
Lunar Orbiter I takes the first picture of Earth from the Moon's orbit, 1966
Bryan Allan, in a Gossamer Condor, completes the first man-powered flight of one mile, 1977
Soviet dancer Alexander Godunov defects to the US, 1979
Hans Tiedge, top counter-spy of West Germany, defects to East Germany, 1985
Hungary opens the Iron Curtain and allows thousands of East Germans through to West Germany, 1989
West Germany and East Germany announce that they will unite on Oct. 3, 1990
The remains of Anastasia and Alexei, rumored to have survived the 1917 assassination of the Russian Czar and his family, are found, 2007
Heavy winds knock down the Anne Frank tree in Amsterdam, breaking off approximately one meter above the ground, 2010
Libyan leader Muammar Gaddafi is overthrown, 2011
Lance Armstrong, the seven-time Tour de France winner, announces he will not contest the U.S. Anti-Doping Agency charges of doping, a result of which will include being stripped of all of his tour de France victories, 2012
Libya's ruins of Cyrene, a World Heritage Site near Shahhat, is damaged by real estate developers, 2013
Destruction by ISIS of the first century AD temple of Baalshamin in the ancient ruins of Palmyra is confirmed by Syrian officials, 2015
The world's driest place, the Atacama desert in Chile, blooms after and unexpected rainfall, 2017
Posted by messymimi at 12:00 AM

Your patience in waiting to get the bee shot has really paid off.
Love the garden and admire Grandma's creativity.

Bees aren't known for being cooperative, one might almost think they are camera shy.
Boudreaux has my sympathies, my own plate often looks like it should be the serving platter for a family.

That was a spacious garden and keeping it in order is not easy. We are all hoping, hoping for this pandemic to be over. Have a beautiful day.

Just one bee frightens the life out of me heheh!

What a lovely garden very pretty :-)

I laughed that the joke never fails heheh1

I think I would eat all the ice cream too 🍦

Have a vanillatastic safe Sunday 😷😷😷

It's awfully hard not to eat all of the ice cream! Love those photos. Y'all take care and be safe with those duo of evil storms coming your way.

I have a lot of Rose of Sharon along one fence line that used to attract big bees like that. But I haven't seen any big bees for a couple of years now.

Cute joke. Sorry I am so late, our power was out for 23 hours from yet another storm. XO