Share! (Awww Monday), Inspiring Quote of the Week, and Get It Gone (Poetry Monday)

Yesterday was Lee’s birthday party.  (Red-headed Alec’s son, so my foster grandson by our reckoning.)  He and a cousin were sharing! 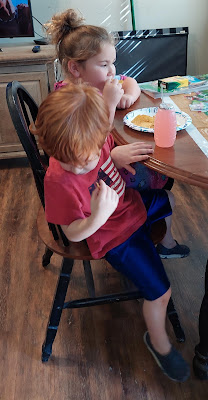 This week the theme is Clean Out Your Refrigerator.

Some holidays are coming,

And you’re going to need room,

And to be blunt the fridge is often

Don't wait so long the bacon

On the brown lettuce is grazing,

Get started early to clear it,

It’s time to dig out what’s in there

And get the nasties gone,

And you’ll be glad when it’s done.

Is that some green bean casserole?

It's from our last get-together,

It really has to go.

When did we buy that sour cream,

No please don't read the date!

Just put it in the bag over there,

It really is too late.

No, the sauce doesn't last forever,

Even if you judge with grace,

It's now a nasty color,

The garbage is its place.

Don't argue over that brown stuff

It's just not worth your time,

How sick you get when you eat it is worse

Than buying new and spending a dime!

Some things are so shriveled

There's no telling what they were,

Of their covering of green fur.

The garbage will be heavy

When we take it out this week,

But you'll love your fridge all fresh and clean

The inside clear and sleek!

I Love to Write Day -- encouraging everyone to write something, begun by John Riddle

The SpaceX Falcon 9 is launched on its first regular flight to the International Space Station with four astronauts aboard, 2020

My fridge gets cleaned out every week, things don't get much chance to go bad in there. the freezer section is a different story, there is bacon in there and I don't even remember buying any, so it must be old.

It's amazing just what you can find in your fridge. And I'm with you, don't eat that old sauce! It's not worth the stomach ache.

And pop up comments are fine for a reason, but Capthcas are not, could you please deactivate them, todayI had to find bridges, bikes and taxas. sigh.

My fridge doesn't get cleaned out often enough - but it isn't that bad.
Thank you for the pop up comments - and a big sigh at blogger for making them necessary.

Dearest Mimi,
I'm always in awe for everything you share, thank you for amazing me!
And thank you for hosting, as well!
Wishing you a wonderful AWWW MONDAY and new week
XO Daniela at ~ My little old world ~

That quote is so true heheh1

Best wishes to you and yours.

That quote is super wise and should be followed. As for the fridge, ours is pretty well cleaned and sorted all the time. Gramma who can't really see much anymore, is a different story. Mom is in there sorting out every time we visit which can be weekly. If she could see how bad some of the things look in there she would be shocked. Mom just quietly disposes of them and moves on. Great advice, though, as a fridge is a place people rarely sort out.

I love the poem Mimi. I guess I'd better get to my fridge. Have a great day.

Love your Spark and love the birthday shot. Love that red hair. Hubby used to have red hair. It's white now, but he still has a head full of hair.

Love the poem. Made me smile. You're a wonderful wordsmith.

Those two cuties look like they are having some fun! How did you know exactly what I had in my fridge?! MOL!

Such cute kids. I love this spark- so true. And great poem. I definitely need to clean out the fridge to make room for the turkey.

Those two wee ones are sure cute together. That was a terrific Spark and such a good poem, we can relate to that one!

We rec'd an elec. skillet for our wedding decades ago. Nearly wore it out.

those babies are too darn cute!!

We LOVE the poem, and the Spark, I'm printing it an putting it on my affirmation wall! I gotta say Kids sure know how to have fun!

Perfect poem for the season at hand. I'm working on cleaning out my refrigerator and reorganizing my freezer to make room for all my holiday dishes. I like cooking enough of some dishes to cover both Thanksgiving and Christmas. It helps to reduce the work load allowing me more time to simply savor the moment in every way.