Yesterday was The Big Shop for the holiday meal this week.  Grandpa and i went to the grocery and got everything, and i am pretty sure it's everything but some eggs i need for something i'm making here at the house.  All the items on Grandma's list were in stock, and while the price was high, it's not that out of line with what we've spent shopping for holiday meals in the past.

Boudreaux done be goin' in Gauthier Grocery to be gettin' de holiday shop for Clothile.  He done see a sign dat say, "Turkeys, $5 each, or 3 for $20."

"Gauthier, you ol' rascal, you gots to take you down dat sign 'bout how much fo' de turkeys!"

An' Gauthier done say, "Mais, no!  I don't never done sold t'ree turkeys to so many cust'mers in me whole life!"

There aren't nearly so many Thanksgiving decorations as there were decorations for Halloween or as there will be for Christmas, but you can still find a few things, mostly door wreaths and pumpkin displays. 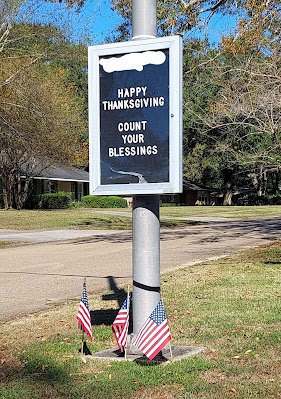 National Farm-City Week -- US (on the week of Thanksgiving, remember that it's the farmers, ranchers and growers who supply your celebratory foods)

Tori No Ichi -- Japan (the second "rooster day" of November, so called because it is held on the two or three days of the rooster this month, in which to wish good luck and prosperity at temple and shrine ceremonies around the country, and celebrate with a fair)

Totensonntag/Ewigkeitssonntag -- Germany (Sunday of the Dead/Eternity Sunday; a general celebration and memorial of all who have died, decreed to be celebrated in Lutheran Churches by King Frederick William III of Prussia in 1816)

In the Democratic Republic of the Congo, a measles epidemic has so far killed over 5,000 people in this year, making it the world's largest and fastest moving epidemic, 2019