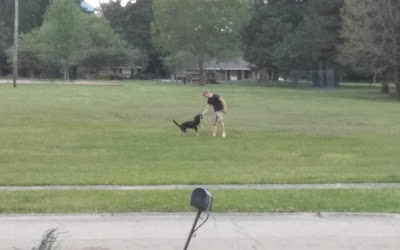 Words for Wednesday is a moveable feast of word or picture or music prompts that encourages us to write stories, poems, or whatever strikes our fancy.  This month, the prompts are being posted by Delores of Mumblings.


Here are this weeks prompt words:

"BRILLIANT!" she muttered to herself as she heard the first stirrings of sounds from the CRIB through the baby monitor at her side.

She was at a critical point in rebuilding the ENGINE, a place where one MISSTEP would make much of her previous work need to be redone.  As she took a moment to PONDER her next step, hoping the sound from the child was just a bit of a dream and not a true awakening, the VOLUME began to rise like the ROLLING of THUNDER added to the BLAST of a BOULDER crashing down the mountain from which it has just been SPLIT, the ANCIENT sound of child in need screaming louder and louder for help to come now!

Heaving a sigh that came from her toes, she grabbed a wrench and propped it where she hoped it would prevent a total collapse back into chaos.  Wiping her greasy hands on an almost equally greasy rag, she bounded into the nursery where her entrance cut the noises short and brought a sunshiny smile from the boy, who grinned and raised his arms and snuggled in as soon as she lifted him up.

Her previous irritation melted at the joy of this reunion and she changed his diaper, then they headed through the kitchen to grab a box and she took him with her out to the garage.  Plopping him in the old high chair she kept there, she poured the oat circle cereal bits onto the tray and went back to her work, telling him the steps she was taking and the names of her tools as she went, while he munched his snack and listened and watched her every move with wide eyes, not yet old enough to know he was watching his destiny.

Roman Emperor Pertinax is assassinated by Praetorian Guards, who then sell the throne in an auction to Didius Julianus, 193
Viking raiders sack Paris, who leave in exchange for a huge ransom, 845
The origin of the Fasli Era in India, 1556
Juan Bautista de Anza finds the site for the Presidio of San Francisco, 1776
Nathaniel Briggs of NH patents a washing machine, 1797
Heinrich Wilhelm Matthäus Olbers discovers 2 Pallas, the second asteroid known to man, 1802
The US Salvation Army is officially organized, 1885
Henri Fabre becomes the first person to fly a seaplane, 1910
Jews are expelled from Tel Aviv & Jaffa by Turkish authorities, 1917
Constantinople and Angora change their names to Istanbul and Ankara, 1930
The McGill français movement protest occurs, the second largest protest in Montreal's history, 1969
Operators of Three Mile Island's Unit 2 nuclear reactor outside of Harrisburg, Pennsylvania fail to recognize that a relief valve in the primary coolant system has stuck open, leading to a partial meltdown, 1979
In South Africa, Zulus and African National Congress supporters battle in central Johannesburg, resulting in 18 deaths, 1994
The 2005 Sumatran earthquake rocks Indonesia, and at magnitude 8.7 is the second strongest earthquake since 1965, 2005
At least 1 million union members, students, and unemployed take to the streets in France in protest at the government's proposed First Employment Contract law, 2006
Australian diplomat Peter Woolcott's draft for the first-ever treaty to regulate the conventional arms trade is discussed by members of the United Nations, 2013
Posted by messymimi at 12:00 AM