Just because Sandee of Comedy Plus is no longer hosting Silly Sunday does not mean i will quit telling Cajun jokes.

This past week has been difficult.  One of my paychecks bounced, causing a chain reaction that has me down $228 and counting.

Since you can only laugh or cry, i choose to laugh (while hoping we have enough to cover the insurance payment that is coming up).

One time when Boudreaux be leadin' a fishin' tour in de bayou, he get to talkin' to one de men an' fin' out de man be rich from de oil on his land.

So Boudreaux ax him 'bout why oil cost so much, an' de man say, "My oil isn't that expensive.  Now Van Gogh, he has the most expensive oil in the world!"

Boudreaux decide he goin' get him a job wit' de bill collector.  De man tell him if he can get de worst debtor to pay, he can have him de job.

So Boudreaux go him to de debtor, an' he come back wit' wads o' cash, an' de owner de collectin' agency say, "How did you get him to pay, I've been trying to get money out of him forever!"

Boudreaux be goin' over his stock portfolio an' it don' be lookin' so good.  He done tol' de investin' advisor, "Mais, dis be worse dan a divorce because I done lost half my net worth an I still have the wife!"

Even Grandma's most mundane household items are decorative: 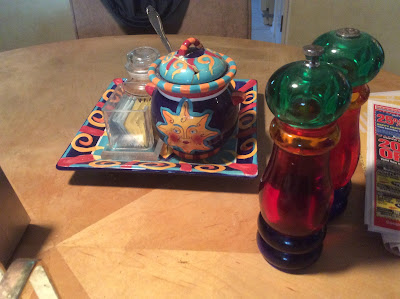 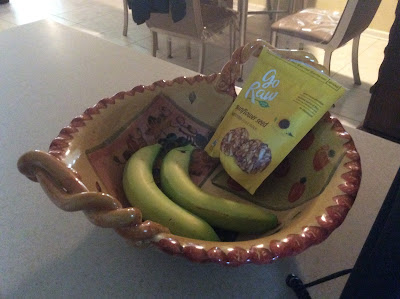 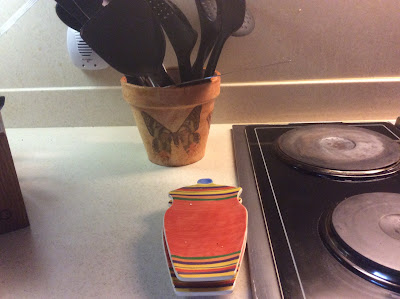 National Day of Celebration of Greek and American Democracy -- Greece; US

Numbskulls and Clodhoppers' Dance -- Fairy Calendar (i know a couple of people who qualify on both counts; i need to find out how to buy tickets!)

St. Dismas' Day ("Dismas" is the name given to the unnamed "Thief on the Cross", crucified next to Jesus according to Biblical accounts, and who repented; Patron of condemned/death row prisoners, funeral directors/undertakers, penitent criminals, prisoners, reformed thieves; Merizo, Guam)

The Tichborne Dole - in Alresford, Hampshire, UK; since 1150, a gallon of flour is given to every resident by the Tichborne family head on this day, to avoid a curse

The first Easter, according to calendar-maker Dionysius Exiguus, 31
According to legend, Venice, Italy is born today at noon, 421
Richard I is wounded by a crossbow bolt while fighting France, leading to his death on April 6, 1199
Robert the Bruce becomes King of Scotland, 1306
Sir Walter Raleigh renews Humphrey Gilbert's patent to explore North America, 1584
Henry Hudson embarks on an exploration for Dutch East India Co., 1609
Lord Baltimore founds Catholic colony of Maryland, 1634
Saturn's largest moon, Titan, is discovered by Christian Huygens, 1655
Mount Etna in Sicily erupts, destroying Nicolosi, killing 20,000, 1669
The Slave Trade Act becomes law, abolishing the slave trade in the British Empire, 1807
The Swansea and Mumbles Railway in England, then known as the Oystermouth Railway, becomes the first passenger carrying railway in the world, 1807
Percy Bysshe Shelley is expelled from the University of Oxford for publishing the pamphlet The Necessity of Atheism, 1811
Greeks revolt against the Ottoman Empire, beginning the Greek War of Independence, 1821
In New York City, the Triangle Shirtwaist Factory fire kills 146 garment workers, leading to factory reform laws, 1911
The Georgian Orthodox Church restores its autocephaly abolished by Imperial Russia in 1811, 1917
The first successful tornado forecast predicts that a tornado will strike Tinker Air Force Base, Oklahoma, 1948
The European Economic Community is established (West Germany, France, Italy, Belgium, Netherlands, Luxembourg), 1957
Canada's Avro Arrow makes its first flight, 1958
Civil rights activists led by Martin Luther King, Jr. successfully complete their 4-day 50-mile march from Selma to the capitol in Montgomery, Alabama, 1965
The first fully functional space shuttle orbiter, Columbia, is delivered to the John F. Kennedy Space Center to be prepared for its first launch, 1979
The world's first wiki, a part of the Portland Pattern Repository, is made public by Ward Cunningham, 1995
The European Union's Veterinarian Committee bans the export of British beef and its by-products as a result of mad cow disease, 1996
Protesters demanding a new election in Belarus, following the rigged Belarusian presidential election, clash with riot police, 2006
In southwest China, environmental and health concerns among residents are raised when 1,000 dead ducks pulled from the Sichuan River, 2013
Posted by messymimi at 12:00 AM