I Can Quit Any Time (Six Sentence Story) and Good Fences

“And that’s JakeJones for the finish!” the announcer intoned, and Martin yelled out several choice expletives from his vast repertoire to the obvious disdain of his companion.

“Man, you’ve got to stop betting on the horses,” Trey said, “they never brought you nothing but trouble.”

“Aww, it’s just a pastime, I enjoy the thrill,” Martin answered, to which Trey replied, “You didn’t sound thrilled to me just now.”

“You’re starting to sound like my ex-wife,” Martin growled.

“Yeah, she was sure you were hooked, and I’m starting to wonder if she was right.”

Linking up with Denise at Girlie On The Edge Blog, where she hosts Six Sentence Stories, and the cue is Finish.

When i took a street i don’t usually go down, i found a treasure, a fence with a lovely bush. 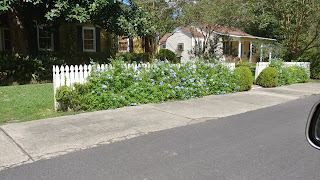 Massive earthquake strikes Aleppo, Syria, 1138
Columbus' ship sites land on the horizon (the Bahamas), 1492
Huldrych Zwingli is killed in battle with the Roman Catholic cantons of Switzerland, 1531
Peter the Great becomes tsar of Russia, 1689
Explorer Meriwether Lewis dies under mysterious circumstances along the Natchez Trace in Tennessee at the Grinder's Stand Inn, 1809
The first steam powered ferryboat, the Juliana, begins operation, 1811
Australia's oldest university, University of Sidney, is inaugurated, 1852
The Great Chicago Fire is finally extinguished, 1871
David Houston patents roll film for cameras, 1881
First female FBI "special investigator", Alaska Davidson, appointed, 1922
With the opening of store # 1252, in Milford, Delaware, J.C. Penney becomes a nationwide company, with stores in all 48 states, 1929
CBS's mechanical color system is the first to be licensed for broadcast by the U.S. Federal Communications Commission, 1950
Pope John XXIII convenes the first ecumenical council of the Roman Catholic Church in 92 years, Vatican II, 1962
NASA launches Apollo 7, the first successful manned Apollo mission, 1968
The NBC sketch comedy/variety show Saturday Night Live debuts with George Carlin as the host and Andy Kaufman, Janis Ian and Billy Preston as guests, 1975
The Mary Rose, a Tudor carrack which sank on July 19 1545, is salvaged from the sea bed of the Solent, off Portsmouth, 1982
The record high of the Dow Jones Industrial Average occurs at 14,198.10 points, 2007
A ban on fracking is upheld by the Constitutional Council of France, 2013
Posted by messymimi at 12:00 AM

OUch as this bites. Addictions are nasty.

You kind of have to wonder what courtiers, cowherds, and gloveless people have in common...

I'm not buying this either. He's not going to quit. Ever.

Gambling is one of the most common addictions because people won't admit it.

Neat fence photo and quite the addictions story ~

Cephalods, Michaelmas, and Depression are such odd thoughts.

I really like that fence with the bushes. That is terrific. You all have a great day.

For those in denial, it boils down to rationalizing it all away. Slippery slope and no soft landing.
Good 6.

He is hooked! Lovely white fence. Have a great day!

I like the white picket fence. Have a lovely weekend.

No matter how his horse finishes this will not end well.
Well done.