Not Quite (Six Sentence Story) and Good Fences

She came in from work to find he had arrived home first and was preening before the mirror, dressed in a quite ridiculous outfit.

"What do you think of my costume?" he asked, striking what he hoped was a threatening piratical pose.

She looked at him and bit back a laugh, but had to say with a smile, "That hat - you look like Cap'n Crunch!"

His threatening pose melted in disappointment as he wailed, "Say it ain't so!"

The fake parrot on his shoulder fell over and hung at a rakish angle, and they both burst out laughing at that point.

When they finally quit laughing, they had collapsed breathlessly onto the couch and he said, "I guess it's back to the drawing board on what to wear to the costume party."

Linking up with Denise at Girlie On The Edge Blog, where she hosts Six Sentence Stories, and the cue is Crunch. 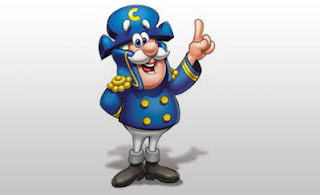 In keeping with going to the dogs this week, at least as much as a cat person ever does, a repeat of my favorite dog fence/gate: 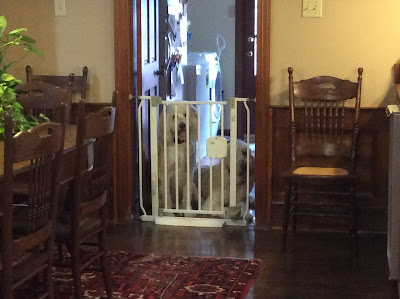 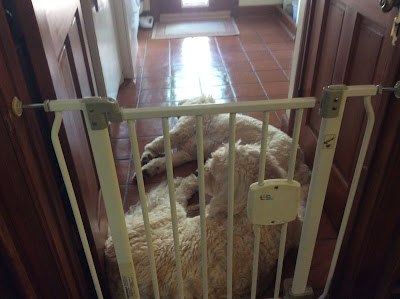 Dalton Defenders Days -- Coffeyville, KS, US (honoring those who defended Coffeyville's banks against the Dalton Gang in 1892; through Sunday)

Tennessee Valley Old-Time Fiddlers Convention -- Athens, AL, US (200 contestants, 18 catagories, all crammed into three music filled days; if you love old time fiddle music, this is the place for you)

Tewa Deer Dance -- Tewa Native Americans (celebrating the cosmic duality of the feminine and masculine, and honoring male and female ancestors; through the 7th)

One of the largest naval battles in history, the Battle of Lake Poyang, ends when the Chinese rebel forces of Zhu Yuanzhang defeat Chen Youliang, 1363
The first full English translation of the Bible, sometimes called the Matthew Bible, which contained the work of translators William Tyndale and Miles Coverdale, is printed in Switzerland, 1537
Pope Gregory XIII's calendar adjustment that bears his name takes effect, with tomorrow being not Oct. 5, but Oct. 15, 1582
Plymouth Colony in Massachusetts drafts its first code of law, 1636
Peter Stuyvesant establishes America's first volunteer fire department, 1648
Christian Huygens patents the pocket watch, 1675
The state of Belgium is created after separation from the Netherlands, 1830
The New Orleans Tribune becomes the first black daily newspaper, 1864
The Orient Express, linking Turkey to Europe by rail, makes its first run, 1883
Norman Rockwell's Willie Gillis character debuts on the cover of the Saturday Evening Post, 1941
The Protocol on Environmental Protection to the Antarctic Treaty is opened for signature, 1991
The Rome General Peace Accords ends a 16 year civil war in Mozambique, 1992
NATO confirms invocation of Article 5 of the North Atlantic Treaty, 2001
SpaceShipOne wins Ansari X Prize for private spaceflight, by being the first private craft to fly into space, 2004
What is believed to be the oldest high-altitude human settlement is found in Kokoda, Papua New Guinea, 2010
Nissan unveiled the NSC-2015 electric car prototype at the Ceatec 2012 show in Tokyo; the car drove and parked itself, 2012
Posted by messymimi at 12:00 AM