Some of the requirements for a day you wish never happened may include but are not limited to: first, the power goes out in the middle of the night, the generator does not come on, you go out to check and find someone turned it from automatic to off, and you get it working.

About two hours later the power goes out again, and you can't get the generator on again; upon getting up for the morning two hours after that at around 4:30am (because you finally give up and realize you aren't going to sleep any more anyway), you find it isn't that the power is out, it's that the generator has malfunctioned big time because everything in the house not connected to it has electricity.

A few hours after that, while at the shelter dealing with Kirby escaping his cage again and climbing behind the monitor for the security cameras (yes, we left his cage open, shut the room door, and he climbed back in his cage to hide under his blanket), try at the same time to get in touch with the generator guy, who, it turns out, it two hours away on a job that will take a couple of weeks, and his employee is in another town two hours the other direction doing the same thing.

About this time find out that your work for the day has cancelled due to her own emergency so you won't get any pay for the day, and get a call from the husband who went back home to try the first solution the generator guy suggested telling you that it didn't work.

Convince the generator guy to drive back to town to help only to have him break down on the side of the highway; get the generator guy to coach you through cutting off the generator transfer switch without electrocuting yourself by calling him on the spare phone while using your own phone for a flashlight because the kids took the flashlight again and didn't put it away, but at least that lets the electricity flow into the rest of the house again.

Yes, that was my yesterday (and yes, it means the generator guy will have to come out and do a permanent fix later), today i am fasting while doing a nine hour cleaning job, tomorrow is a colonoscopy -- a veritable trifecta of days that meet the requirements for days you don't really want to have happen at all.

Linking up with Denise at Girlie On The Edge Blog, where she hosts Six Sentence Stories, and the cue is Requirements.

We will see more of these temporary fences popping up for a while: 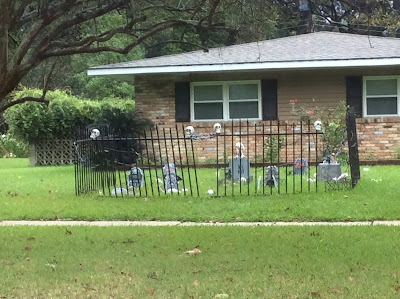 Anti-Slavery Day -- yes, there are still slaves in this world , find out how to help them here

Biketoberfest -- Daytona Beach, FL, US (last chance to ride before winter, and enjoy concerts and shows, too; through Sunday)

Procession of the Lord of Miracles (Senor de los Milagros) -- Lima, Peru (Christian celebration of the Lord's miracles, with song, dance, prayers, and parades; through tomorrow and again on the 28th)

Women in Military Service for America Memorial is dedicated, 1997
University of Heidelberg opens, 1386

Pappus of Alexandria, Greek philosopher, observes an eclipse of the sun and writes a commentary on The Great Astronomer (Almagest), 320
Caliph Al-Hakim bi-Amr Allah destroys the Church of the Holy Sepulchre in Jerusalem, 1009
Battle of Assadun (Ashingdon), Danes defeat Saxons, 1016
Basel, Switzerland is destroyed by the Basel earthquake, the most significant historic seismological event north of the Alps, 1356
Fourth Battle of Kawanakajima -- Takeda Shingen defeats Uesugi Kenshin in the climax of their ongoing conflicts in feudal Japan, 1561
The shoemakers of Boston form the first labor organization in the Colonies/US, 1648
The Mason/Dixon line is agreed upon, 1767
Herman Melville's Moby-Dick is first published as The Whale by Richard Bentley of London, 1851
The US takes formal possession of Alaska from Russia, for $7.2 million, 1867
Edison makes electricity available for household use, 1878
John Owen becomes the first formally timed person to run 100 yd dash in under 10 seconds, 1890
United States takes possession of Puerto Rico, 1898
The British Broadcasting Company (later Corporation) is founded, 1922
The Grand Ole Opry opens in Nashville, Tennessee, 1925
Texas Instruments announces the first Transistor radio, 1954
The Soviet probe Venera 4 reaches Venus and becomes the first spacecraft to measure the atmosphere of another planet, 1967
Azerbaijan becomes independent from the USSR, 1991
After 8 years in exile, Benazir Bhutto returns to her homeland Pakistan, 2007
Saudi Arabia becomes the first country to turn down a seat on the UN Security Council in protest over Syria, 2013
Posted by messymimi at 12:00 AM

Your yesterday sounds truly nasty. I hope it isn't repeated any time soon.
Good luck with the colonoscopy.

Oh my goodness, that does sound like a bad group of days. fasting while doing 9 hours of cleaning does not sound like fun. When I had a colonoscopy I self hypnotised not to notice the pain and I didn't notice any pain. Nobody was more surprised than me. I guess I must be a reasonably good hypnotic subject.

Your blog is great. I read a lot of interesting things from it. Thank you very much for sharing. Hope you will update more news in the future.
geometry dash
happy wheels
animal jam

Dang, that really was quite the run of bad stuff. Good luck on your procedure tomorrow.

Sounds complicated. If your client has an emergency and you can't work that day (or get paid), you should at least get some down time. Everyone deserves a break now and then.

Sorry you are having to fast and do a 9 hour cleaning job. :( That sounds absolutely miserable. One happy bit of news: It's almost Friday?

What a day and no pay either and the expense of having the generator fixed. Some days are like that.

Have a better day today. ♥

What a stressful day you had. Hope every thing goes smoothly for your colonoscopy.

WOW! What a day and a colonoscopy to boot.I would never even try to fix it myself. I would probably electrocute myself. Good luck and also, have a nice day Mimi. LOL See ya.

(can't wait to see your TToT this weekend....talk about an abundance of hypograts)

That sounds like an awful day. We had a similar problem with our generator, but we still haven't gotten it running again. I doubt I could work as hard as you do and fast at the same time. good luck on the colonoscopy.

yeowch.
I think that says it all.
Hopefully that will placate the universe for a while and you can exist in quiet uneventfulness for a bit.

Oh my, this surpasses the experiences of Alexander's terrible, horrible no good bad day! Hope you have a good report on your test. I'm glad they are typically only given every five years.

Oh. My. Gosh. That is one not good day! Today doesn't sound like it was a piece of cake either! May your weekend be way, way better.

Hope today is more peaceful for you ~ Xox