A Bit In Reserve (Six Sentence Story) and Good Fences

"Go stand next to the dresser with the mirror, get where you can look between it and the wall, you have to lean in and look very closely at the back of the mirror frame," he said.

She held the phone at an odd angle so she could follow his instructions, and said, "Okay, now what?"

"Do you see something white -- it should be taped to the back of the mirror, far enough in that you may have to scoot the dresser away from the wall a bit to retrieve it."

"Yes, I see it," she said excitedly, slipping her hand in, then realizing he was right she put the phone down, grunted a bit as she moved the dresser just a scootch away from the wall, and then, "got it!"

"Excellent, open it, count out exactly what we need just for today, and put the rest back.  We will replace it on payday, and let this be a reminder to you that you should always, always keep a little bit in reserve for that absolute emergency."

Linking up with Denise at Girlie On The Edge Blog, where she hosts Six Sentence Stories, and the cue is Frame.

Please note that it's the end of the school year and Gosia has been very busy, she may still be out of town with her university class so there may or may not be a link-up today.  That's okay, i like this fence and wanted to post it either way. 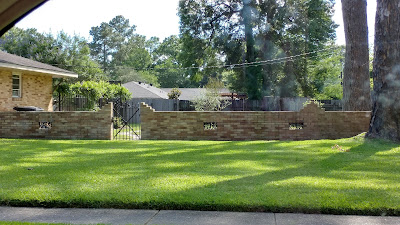 Hay Festival of Literature -- Hay-on-Wye, Powys, Wales (largest annual festival of literature in a beautiful market town in the Black Mountains of the Welsh marches; through 2 June)

Kodiak Crab Festival -- Kodiak, AK, US (there's more than bears up here, you know! through Monday)

Joan of Arc is captured by the Burgundians while leading an army to relieve Compiègne, 1430
The marriage of King Henry VIII to Catherine of Aragon is declared null and void, 1533
The Netherlands declare their independence  from Spain, 1568
The Second Defenestration of Prague precipitates the Thirty Years' War, 1618
After being convicted of piracy and of murdering William Moore, Captain William Kidd is hanged in London, 1701
Benjamin Franklin announces his invention of bifocals, 1785
Napoleon Bonaparte is crowned King of Italy, 1805
South American independence  leader Simón Bolívar enters Mérida, leading the invasion of Venezuela, 1813
The Báb announces his revelation, founding Bábism (the Baha'i Faith), 1844
Organization of the Seventh-day Adventist Church in Battle Creek, Michigan, 1863
The Canadian  Parliament establishes the North West Mounted Police, the forerunner of the Royal Canadian Mounted Police, 1873
The fist transcontinental train arrives in Vancouver, BC, 1887
The first talking cartoon of Mickey Mouse, "The Karnival Kid", is released, 1929
American bank robbers Bonnie and Clyde are ambushed by police and killed in Black Lake, Louisiana, 1934
Tibetans sign the Seventeen Point Agreement for the Peaceful Liberation of Tibet with the People's Republic of China, 1951
Prime Minister of Israel David Ben-Gurion announces that Nazi war criminal Adolf Eichmann had been captured, 1960
The first version of the Java programming language is released, 1995
The Good Friday Agreement is accepted in a referendum in Northern Ireland with 75% voting yes, 1998
The fastest roller coaster in the world, Kingda Ka, opens at Six Flags Great Adventure, 2005
Alaskan stratovolcano Mount Cleveland erupts, 2006
The International Court of Justice (ICJ) awards Middle Rocks to Malaysia and Pedra Branca (Pulau Batu Puteh) to Singapore, ending a 29-year territorial dispute, 2008
Fifteen months after President Hosni Mubarak was ousted in Egypt by a revolution, voters go to the polls for a presidential election, 2012
Chinese archaeologists announce findings of earliest use of barley in China to make beer, in Shaanxi province in 3400-2900 BC, 2016
Hamburg, Germany, becomes the first city to ban diesel cars on some roads, 2018
Posted by messymimi at 12:00 AM

I always hide some large bill in my wallet that i forget until i realize i'm not really broke.

I like that fence - and do try and always keep an 'emergency reserve'.

That fence is nice - isn't it actually a wall? Do you need to hide away your emergency reserve in such an out of the way place? I have it in a bag, more I won't say :)

I have a series of little envelopes tucked away in all kinds of places, myself. I'm sure I'll forget at least one... but that means my heirs can treat themselves to a cup of coffee after they find it, right?

Nice six. you worked it in so discretely I had to go back and look for it.

I too have the habit to hide some reserve in times of emergency and they always come in handy. That is a very pretty and neat wall fence.

good advice (from the character on the phone)... and a good Six (meaning, I went directly to visual mode).

it's always good to have a little hidden away for a rainy day. Great six!

Good story. Always good to have a stash of cash :)

You are great creating a brilliant story. Why don't you write a book? See ya Mimi.

Wow, that is one great looking wall. Great story too. You all have a fantastic day.

You are so good at those stories!

I've told my children not to throw anything away without looking inside of it when I die. Even I don't remember where I've hidden cash! Very good story. I have a dresser like that, it was my Dad's, I need to go look.

I love your story and it's ever so true. We do that here just for those rainy days.

Have a fabulous day and rest of the week. Hope you have a long weekend of rest. ♥

Looks like you have a bit of spam in comments, unless you're interested in that sort of prouct (see two comments above mine). lol

Good story. We've always told our kids to keep a little cash reserved for emergencies but do they listen? That's right, no they do not. :) Have a good weekend. I'm so ready for it to be here!

I was so with your character squeezing between the dresser and the wall to grab that envelope, lol. Extremely visual read. And some good advice to all - good to keep a stash :D
Enjoyable SSS!

A good reminder, Mimi!
I could really feel the awkwardness of trying to move the dresser, since I had to ask my husband help me move a large desk away from the wall just this afternoon. No money, just dust bunnies. :-)

Wonder what they will go do with the money? Also a savings a account where they can earn interest is probably a better place to have the money. lol.

Ha! The old hide it from yourself sort of trick. I have to wonder what they need on that day. I hope payday pays soon.

I wasn't expecting money in the envelope! Great story!