Mine, All Mine (Cajun Joke) and Sunday Selections

Yesterday we finally had the money from the insurance company and the time (because i worked extra on Friday to have the morning free to do it), so i took Bigger Girl and we went and got the new-to-her car from Lenny's daughter.  Lenny (of Kevin and Lenny, our mechanics) has taken care of it for first his wife and then his daughter, so we are hoping it runs well a long time.

Lenny's daughter told Bigger Girl, "If you find goldfish crackers in the back seat, those are a gift from my son!"

While we were talking about what to buy for her, Sweetie said, "This one is a standard, isn't it?" and was glad to know it was so he won't have to give her lessons.

Dat done remin' me o' Boudreaux.  He done see his rich cousin, Guilbeau, in town an' Guilbeau say, "Boudreaux!  How 'bout I take you out to eat in my new car!"

Now, Boudreaux don' be one to never pass on de opportune to go get him a free meal, so he climb in de new Lincoln wit' Guilbeau an' de firs' t'ing he see is it be a stick shift!

Boudreaux say, "Guilbeau, how be you gots a Lincoln wit' a stick?  Dey don' make dem dat way, do dey?" 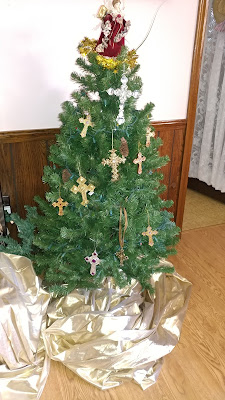 And one house we clean always has the nicest wreaths on the front door: 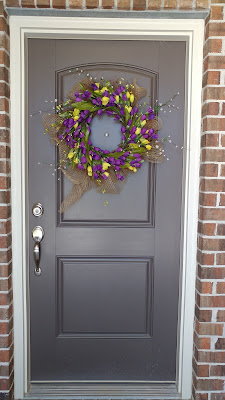 That same house has a guest bedroom that rivals any and i would love to stay in: 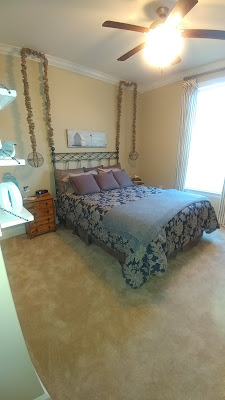 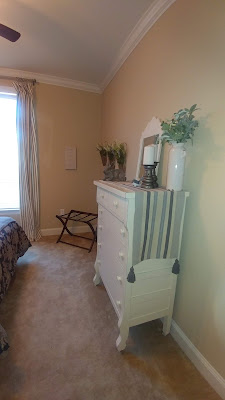 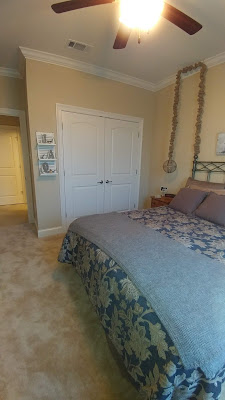 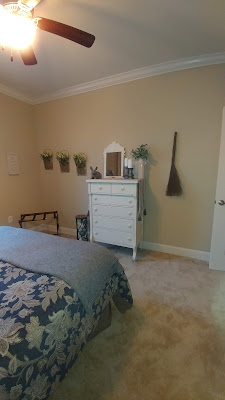 Bats Day in the Fun Park -- Anaheim, CA, US (a Spooky Trip to Disneyland for fans of goth, industrial and deathrock music)

Be Kind to Animals Week -- sponsored by the American Humane Association, through Saturday

Clun Green Man Festival -- Clun, Shropshire, England (spring festival ending with the Clun Green Man battling and defeating the Frost Queen to end winter and bring in spring, along with a May Fair; through the Monday Spring Bank Holiday)

Mayday for Mutts -- originally sponsored, but now celebrated by many animal rescues on different dates

Motorcycle Mass and Blessing of the Bikes -- Paterson, NJ (on the first Sunday of May, which is Motorcycle Safety Month; some other places will also observe bike blessings throughout the month)

Randwick Wap Cheese Rolling -- Randwick, Gloucestershire, England (Yes, they roll cheeses that were blessed last Sunday around the church and give the Mayor a good dunking in the pond; yes, they've been doing it for 700 years; no, no one is quite certain why, though many stories are told of the origin.  The fayre is next Saturday.)

Rebel barons begin a chain of events that leads to King John of England's eventual signing of the Magna Carta, 1215
Kublai Khan, grandson of Genghis Khan, becomes ruler of the Mongol Empire, 1260
Jews are expelled from Speyer Germany, 1430
Christopher Columbus lands at Jamaica and claims it for Spain, 1494
In France, the Estates-General convenes for the first time since 1614, 1789
Citizenship is denied to Jews of Canton of Aargau Switzerland, 1809
Mary Kies becomes the first woman issued a US patent, for a method of weaving, 1809
The American Bible Society organizes in NY, 1816
Emperor Napoleon I dies in exile on the island of Saint Helena, 1821
In Belgium, the first railway in continental Europe opens between Brussels  and Mechelen, 1835
The American Medical Association forms in Philadelphia, 1847
Cinco de Mayo in Mexico: troops led by Ignacio Zaragoza halt a French invasion  in the Battle of Puebla, 1862
The first train robbery in the US occurs in North Bend, Ohio, 1865
Sitting Bull leads his band of Lakota into Canada to avoid harassment by the United States Army, 1877
The Music Hall in New York City (later known as Carnegie Hall) has its grand opening and first public performance, with Tchaikovsky as the guest conductor, 1891
Cy Young pitches the first perfect game in modern baseball history, 1904
Coco Chanel introduces Chanel No. 5, 1921
John T. Scopes is arrested for teaching evolution in violation of Tennessee's Butler Act, 1925
West Germany gains full sovereignty, 1955
Alan Shepard becomes the first American to travel into outer space, 1961
Bobby Sands dies in the Long Kesh prison hospital after 66 days of hunger-striking, aged 27, 1981
The government of Sudan signs an accord with the Sudan Liberation Army, 2006
Mass protests in Greece erupt in response to austerity measures imposed by the government as a result of the Greek debt crisis, 2010
Scientists announce the discovery of the oldest & most distant galaxy known to man, EGS-zs8-1, 2015
Posted by messymimi at 12:00 AM

Love that wreath.
The spare bedroom is nicer than many a motel room I have seen.
Yay for getting insurance money and a new(ish) car for Bigger Girl.

Mimi, you tell your daughter that I could never drive a shift standard car especially now with my right foot. I had to change the pedals to the left side of my car. Have a wonderful Sunday my friend.

Gratz on the new old car. I like your cajun joke, which again reminds me of one of the many differences between our countries. Stick shift or not. Here the automatic is something for elderly, disabled and lazy people, everybody else have a stick shift, andt that is what we're taught when learning to drive as well. I'd rather drive Guilbeau's car than Boudreaux' if that's an automatic :D

Good on the new wheels for your daughter. That was quick.

Have a fabulous and blessed Sunday, my friend. ♥

I like seeing how others do their guest rooms. Makes me want to do some redecorating now that the grand-children are growing. So glad you gal has transportation which makes your life much easier.

That was a funny joke. I never learned to drive a stick. That is a nice guest room.Our guest room comes with a cat ( he lives in that room ).