"Let me get this straight -- first I take you to your first job of the day for 6am, then I head out to go get my brother.

"Once I have him at work, I come get you, and we go to the shelter together.

"After the shelter, I drop you with Ms. G, and I wait for you to call me to come get you, but no matter what time you call me I still go get my brother at 3:30pm to take him home, and eventually you will need the car so you can go to your last job of the day."

"And if anything else comes up, or you get off work at the same time as him, since I can't be in two places at once, what do we do then?"

We climb that mountain when we come to it.

Linking up with Denise at Girlie On The Edge Blog, where she hosts Six Sentence Stories, and the cue is Mountain.

Yes, the above is what we dealt with yesterday, plus the lizard (whose story will be told on Saturday).  It's turning out to be quite a week.

It's been a while since i posted one of my favorite kind of fences, a white picket. 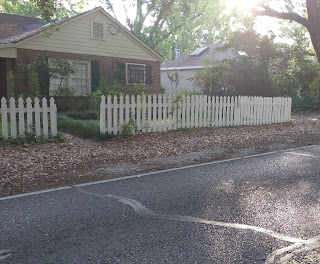 Ascension Day -- Christian; related observances
Procession of the Holy Blood -- Belgium (religious historical procession recalling the adventurous crusaders, especially Count Thierry of Alsace, who was supposed to have carried back relics of the Holy Blood)

Friendship Festival -- Lathrop, Missouri, US (including the super hero look-alike contest; through Saturday)

Titus and his Roman legions breach the Second Wall of Jerusalem; the Jewish defenders retreat to the First Wall, 70
19-year-old Joan of Arc is burned at the stake by an English-dominated tribunal, 1431
In Florida, Hernando de Soto  lands at Tampa Bay with 600 soldiers with the goal of finding gold, 1539
Publication of La Gazette, the first French newspaper, 1631
The Pennsylvania Evening Post become the first daily paper in the US, 1783&
John Francis attempts to murder Queen Victoria, 1842
Westminster's Big Ben rang for the first time in London, 1859
Decoration Day (the predecessor of the modern "Memorial Day") is observed in the United States for the first time, 1868
New York City's Gilmores Garden is renamed Madison Square Garden by William Henry Vanderbilt and is opened to the public, 1879
The Treaty of London, 1913, ends the First Balkan War and Albania becomes an independent nation, 1913
In China protests erupt against the Great Powers infringing on Chinese sovereignty, 1925
A dike along the flooding Columbia River breaks, obliterating Vanport, Oregon within minutes, 1948
The Auckland Harbour Bridge, crossing the Waitemata Harbour in Auckland, New Zealand, is officially opened, 1959
launch of Surveyor 1 the first US spacecraft to achieve landing on an extraterrestrial body, 1966
At the Ascot Park in Gardena, California, daredevil Evel Knievel jumps his motorcycle over 16 cars lined up in a row, 1967
Tiananmen Square protests of 1989: the 33-foot high "Goddess of Democracy" statue is unveiled in Tiananmen Square by student demonstrators, 1989
272 days after the September 11 attacks, closing ceremonies are held for the clean up/recovery efforts at the World Trade Center site in New York City. The last remaining steel beam is removed and transported to the Fresh Kills Landfill in Staten Island, 2002
In Germany, Chancellor Angela Merkel pledges to end all nuclear power within 12 years, 2011
Elon Musk, CEO of SpaceX, reveals the latest Dragon space capsule; the craft is reusable and will allow astronauts to control re-entry and landing; the development suggests that full commercialization of the space industry will soon be a reality, 2014
Posted by messymimi at 12:00 AM

I hope you don't need to climb that mountain. Or not often anyway.

*even more so for those of us who follow you on the TToT... fiction is not as impressive (in terms of busy life) than face...

That was hard to follow. My husband and I drive into work together, so we often have complications regarding getting around and what happens if one person gets done before the other. My husband is always like "we'll cross that bridge when we come to it" rather than trying to work everything out all at once. I'm guessing your day went smoothly?

There's a way round the mountain. Clint Walker, now that's a cowboy!

Your schedule was tiring enough, but to add your brother-in-law to the mix really has me exhausted. I hope he gets some wheels and soon.

You tell a darn good story!

Your SSS sure paints a hectic and full day. It stressed me just thinking about it. lol I love white pickett fences and always dreamed of having one some day. :)

Wise words. Go until you can't. Always a way around the "mountains" ☺

I followed all that and it made me tired just reading it. You are amazing.

That is exhausting just to hear all that. It seems you have it all figured out. The picket fence is wonderful. Have a great day.

That's a lot of fetching and delivering :) Great 6!

They have quite a busy time up ahead of them

Each year, I plant at least two heirloom varieties of something-or-other, in hopes of something magical happening in my yard. Sadly, my gardening skills do not enhance my grand visions...

Trying to work out the details is a challenge sometimes!

Ha! Yep, there are monumental mountains to be managed every day. Great take on the prompt.