"Your photographs are always so perfect!"

"Remember, I've been interested in photography for years and I went out of my way to get lessons."

"So give me a couple of pointers."

"You don't appear to take the time to focus on one thing in composing your pictures -- everything is scattershot, like you are trying to capture everything that's happening all around you all at once, but that makes for visual clutter instead of a nice photo."

"My memory isn't so good, so I guess I am trying to get everything in the picture and let it do the remembering for me, and while that might remind me of things, you're right, it is overwhelming when you look back at the photo."

"There you are, you've answered your own question, more pictures focused on individual parts of what you want to remember will be better than one picture that tries to get everything."

Linking up with Denise at Girlie On The Edge Blog, where she hosts Six Sentence Stories, and the cue is Focus.

The brick fence with greenery over the top was right there when i stopped at a red light, so i snapped it happily: 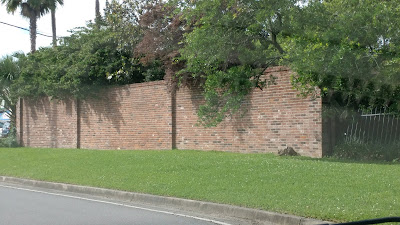 Cheung Chau Bun Festival -- Cheung Chau Island, Hong Kong (one of Hong Kong's liveliest and most coloorful festivals, coincides with Buddha's Birthday celebration, with the procession on the final day; celebration through the 13th)

The first battle recorded with what is considered historic accuracy and detail, the Battle of Megiddo between Thutmose III and a large Canaanite coalition under the King of Kadesh, BC1457
Christopher Columbus leaves Spain for his 4th and final voyage, 1502
Thomas Blood, disguised as a clergyman, attempts to steal England's Crown Jewels from the Tower of London, 1671
British inventor Joseph Bramah patents beer-pump handle, 1785
The city of Reno, Nevada, is founded, 1868
The Vienna stock market crash (Der Krach) heralds the Long Depression, 1873
The first horse-drawn bus makes its début in the city of Mumbai, 1874
Buffalo Bill Cody's Wild West Show opens in London, 1887
The first horseless carriage show in London opens, featuring 10 models, 1896
The lawn mower is patented, 1899
Australia opens its first parliament in Melbourne, 1901
The steam locomotive City of Truro becomes the first steam engine in Europe to exceed 100mph, 1904
The Australian Parliament  first convenes in Canberra, 1927
Edgar Bergen and Charley McCarthy take to the airwaves, becoming an overnight radio sensation, 1937
Rainier III of Monaco becomes Prince of Monaco, 1949
Sam and Friends, with Jim Hensen and his muppets, debuts, 1955
The FDA announces it will approve birth control as an additional indication for Searle's Enovid, making Enovid the world's first approved oral contraceptive pill, 1960
Iranian Jewish businessman Habib Elghanian is executed by firing squad in Tehran, prompting the mass exodus of the once 100,000 member strong Jewish community of Iran, 1979
The South African parliament chooses Nelson Mandela as president, 1994
Estonia ratifies the European Constitution, 2006
A report reveals that hackers using fraudulent ATM cards in February, 2013, stole $45 million, 2013
The fossil of a Chinese feathered baby dinosaur is formally given the identification of Beibeilong sinensis (baby dragon in Chinese), 2017
The discovery of the oldest viral DNA, a form of hepatitis B in 7,000 year old skeleton found in Germany, is reported, 2018
Posted by messymimi at 12:00 AM

Love both your six word story and that greenery topped fence.

Good tips on photography. That is a nice looking fence with greens growing over it.

That is a good story on focus. You have more interesting things to focus on at a red light than I do!😊

That fence, it's almost like a castle wall. Good for us that you're a trigger happy photographer with your aim and focus all fine.

I always think of fences as being made of wood or metal, never brick. I think you might like some of the brick walls around here, they're done in some kind of decorative Victorian pattern and full of holes. The kids love to make bug hotels in them! :)

I will be celebrating Lawn Mower Day.
sigh

although I tend to have a 'center' for my photo, I also tend to take as many photos as possible... thanks to digitial photography, I can increase my luck ratio... lol (remember back in the day, each and every photo 'counted'... on the rolls of 24

My mom loves photography. She has taken classes and worked on it a lot. Over time she has improved but it is a skill you never totally achieve as you can always improve with skill and equipment. Photography is a great hobby.

Your pictures are always perfect. I can't take good ones because my glasses distort things in the camera. Also, a horse show in my home town of Lexington, VA Woo Hoo!

Mimi, you might jut have helped me with my taking of photos. Maybe that's my problem, trying to get to much on my picture. Thanks.

Great six word story and great info on taking pictures. That is some good advice. You all have a super day.

That was a terrific story filled with photo truth!

I take the worst picture ever. Hubby never asks me to take any pictures.

I'm not going to be around much this weekend. We're on a cruise.

Sweet six! Focus is so important and why my photos are a sight!

As of late I seem to take the scattered photo and then a second photo focusing in on something specific. I like your six!

I never really gave it thought, about the distraction/busy aspect of a picture. Makes sense to "zoom" in and have a specific focal point of the picture. Thanks, Mimi!

Excellent advise. I'm going to give it a try as I am guilty of the same faux pas. Excellent six, Mimi.

That greenery really decorates the wall. Have a good weekend.

A very good Six with some excellent advice. The background stuff can often ruin a perfectly good photo otherwise. I have certainly taken enough of those type of photos to know. LOL