Right now i have a very good reason to be grateful for Kevin and Lenny.  One of my clients went out of town and forgot to leave a check, so we will pay when i get that check on Tuesday.  When it comes to money, it's always something.

Now, Boudreaux done be t'inkin' 'bout how Thibodeaux done play de lott'ry as de plan fo' him to retire, and he get him a idea 'bout a joke fo' Clothile.

He start buyin' him a scratch ticket once in a while, an' fin'ly he win him a bit o' money.  So he go home an' he say to Clothile, "What would you do if'n I won me de lott'ry?"

Some photos from the last visit to Grandma and Grandpa's house.  Little Girl went with me and brought Coda.  Coda and Lulu are best friends. 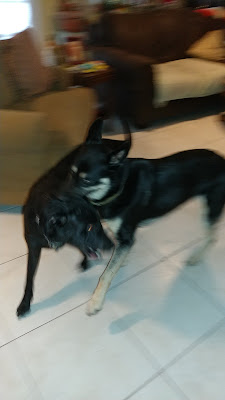 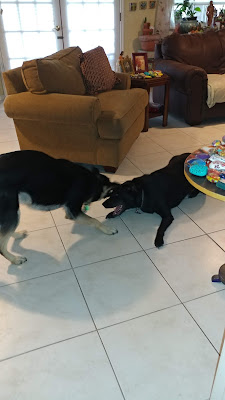 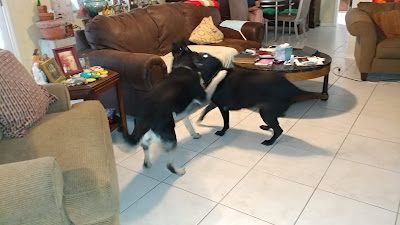 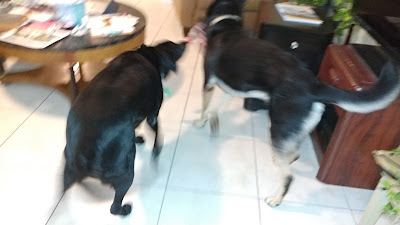 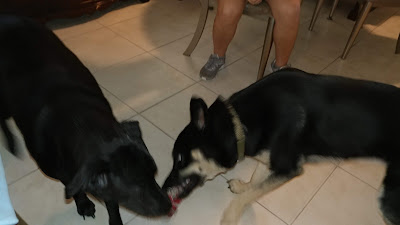 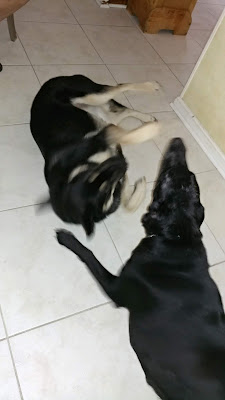 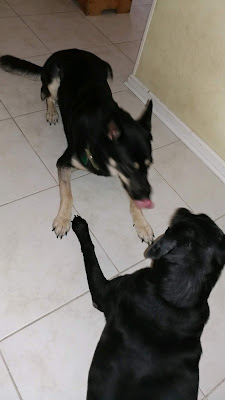 And Grandma has taken to rock painting like a duck takes to water: 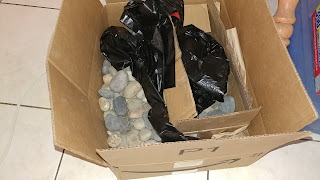 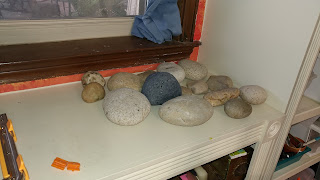 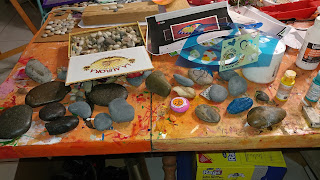 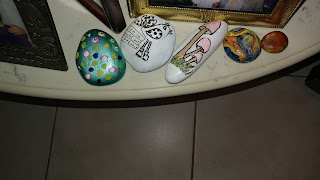 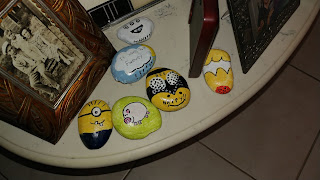 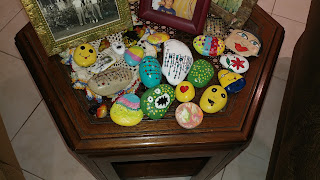 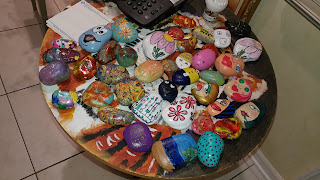 Rabbi Moses Ben Nachman establishes a Jewish community in Jerusalem, 1267
Adi Granth, now known as Guru Granth Sahib, the holy scripture of Sikhs, was first installed at Harmandir Sahib, 1601
The first yacht race is held, between England's King Charles I and his brother James, 1661
Mission San Luis Obispo de Tolosa forms in California, 1772
Juno, one of the largest main belt asteroids, is discovered by German astronomer Karl Ludwig Harding, 1804
Narcissa Whitman, one of the first white women to settle west of the
Rocky Mountains, arrives at Walla Walla, Washington, 1836
The first Pullman sleeping car is put into service, 1859
The Solar Superstorm/Carrington Event: a huge solar sunspot and solar flare storm that disrupted telegraphy and allowed the Aurora Borealis to be seen as far south as the Caribbean occurs, 1859
Joseph Lister performs the first antiseptic surgery, 1865
Robert T. Freeman becomes the first African American to graduate from the Harvard Dental School, 1867
The first underground rapid transit system in North America, the Boston Subway, opens, 1897
One of the first science fiction films ever, A Trip To The Moon, opens in France, 1902
Alberta and Saskatchewan become the 8th and 9th Canadian provinces, 1905
Martha, the last passenger pigeon, dies at the Cincinnati Zoo, 1914
The United States, Australia and New Zealand sign a mutual defense pact, called the ANZUS Treaty, 1951
In Reykjavík, Iceland, American Bobby Fischer beats Russian Boris Spassky and becomes the world chess champion, 1972
Canada adopts the Canadian Charter of Rights and Freedoms as part of its Constitution, 1982
A joint French-American expedition locates the wreckage of the RMS Titanic, 1985
Luxembourg becomes the first nation to complete the transition to all digital tv broadcasting, 2006
After four Israeli settlers are shot at the Israeli settlement Beit Hagai, the Palestinian Authority arrested 250 members of Hamas, 2010
To avoid further fighting, Libya's Transitional Council extends the deadline to surrender for tribal leaders in Sirte, 2011
U.S. National Park officials notify 3,100 recent visitors of an outbreak of Hantavirus sourced to tent cabins in Yosemite National Park, 2012
In southwestern China, at least four people are killed by a 5.9-magnitude earthquake, 2013
Stock markets around the world fall after China reports a low value for its purchasing managers' index, suggesting that the nation's economy is slowing, 2015
Posted by messymimi at 12:00 AM

That Boudreaux, he's a clever one!
I love your Grandma's painted rocks, she's very artistic.

It is always nice to see friends. Echoing River about Grandma's talent.

Dogs like humans are always happy to see and play with their friends. Beautiful rock paintings by your grandma.

Those woofies sure were having some fun and those rocks are pretty cool!

The dogs looked great and the rock painting was interesting. See ya Mimi.

Aww! aren't they good together heheh! what lovely photos :-)

As always the joke made me chuckle heheh!

It would not be Sunday without a Cajun joke! That's a good one.

My son once gave me a fake lottery winner. I scratched off a $10000 *fake) winner. He didn't think it was so funny when I got excited and told him I planned to split my good fortune with him as he bought the ticket.

Funny joke :) That is sweet that Coda and Lulu had a play date. I love those rocks. I am so impressed at how many she completed. I have been working on some for a few weeks and only have 5.

HaHaHa! You tell a fine Cajun tale. Coda and Lulu were so sweet. Always a joy here with all the wonderful shares. Enjoy Labor Day weekend. HUGS

Yep that sounds like the kind of lottery prizes I win too! And those are such endearing dog photos, you can see from their body language how well they get on.