Grandma is a saver.  Not money-wise, that's Grandpa, but otherwise.  Right now we are saving tea bags after we use them, letting the tea dry, clipping them open and removing the tea, and giving them to her.  She wants to paint on them and use them for texture in her art.

Grandpa is the throw-it-away guy.  If he sees something, and he doesn't know what it is, and it looks like trash to him, out it goes.

Yesterday while cleaning at their house, Sweetie took the little plastic sleeve off of the feather duster, set it in the cleaning closet, and proceeded to go after dust and dog fur with all his might and main.

Later, Grandpa came and asked me where the Windex was, he needed it for cleaning the A/C filters (he does this like clockwork the final Saturday of every month, he's hyper-organized that way).  Since i'd already cleaned the mirrors, i handed it to him, i just hadn't gotten back to the cleaning closet to put it away yet.

Later still, i noted that there was no bag in the utility room trash can, which is where the cleaning closet is also located, and there was trash in it.  Getting a bag, i began transferring the trash into the bag, and ran across the plastic sleeve for the feather duster.

Immediately i knew what had happened.  Grandpa, when looking for the Windex in the cleaning closet, found it and, not knowing what it was and it looking like a piece of trash to him, he threw it away.  It's a good thing someone had forgotten to put a new liner in the trash can or Grandma would have given him an earful when the search for it began.

As it is, i hid it and got it out to put the feather duster way when Sweetie was done.  From now on, it's going to be hidden while we use that duster, i am just not quite sure where yet.  Grandpa can find and throw away anything.

Clothile done be complain' dat Boudreaux allus t'row ever't'in' away, even befo' she be done usin' it.  She go to fin' somep'in in de ice box, o' in de cabinet, an' it not be dere, an' she fuss.

She done come home wit' de grocery one day, an' while dey be puttin' it away, she be tellin' Boudreaux not t'row stuff away too fas'.  When dey gets dem to de lettuce, he look at it an' say, "What 'bout dis?"

An' Boudreaux say, "Mais, you be knowin' I's not goin' eat me enny dis green stuff, so you want me to wait two week to t'row it 'way like usual, o' you want me to save de time an' do it now?"

No theme this week, just a bit of this and that.

We've been growing a fine crop of toadstools thanks to the dampness and rain: 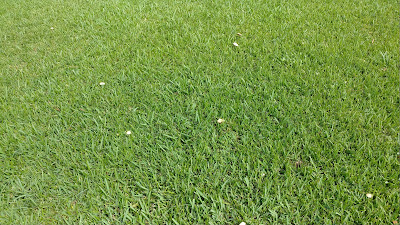 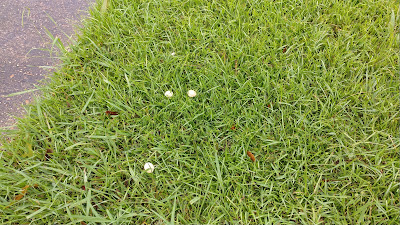 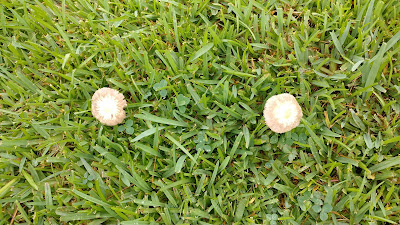 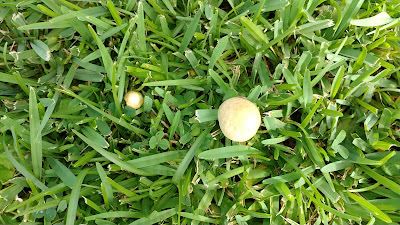 My newest client has some interesting treasures: 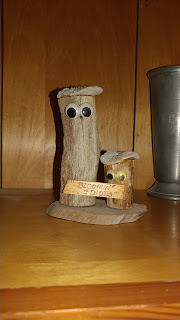 It's not easy to get a picture of a flag on a windy day: 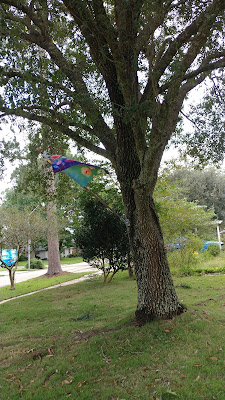 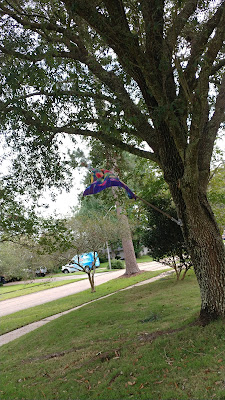 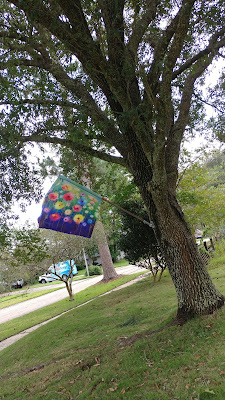 A couple of flowers, and my best bee picture yet: 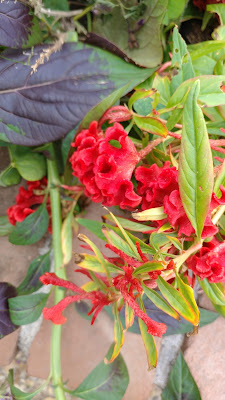 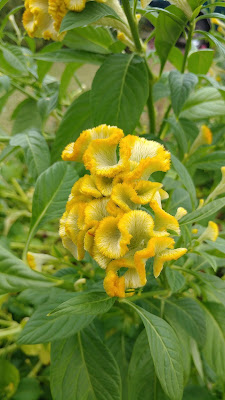 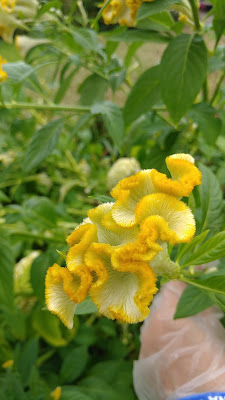 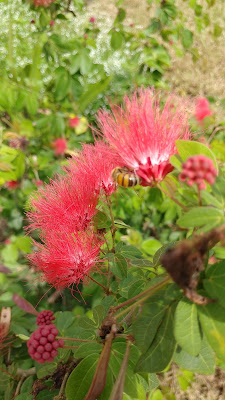 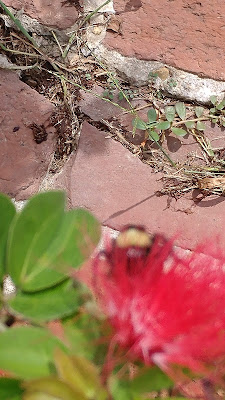 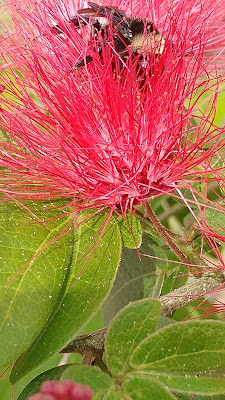 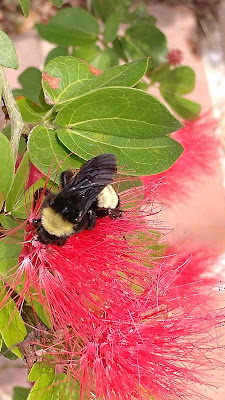 Finally, one shot from Grandma's house, i like the frog that appears to be hopping out of the fairy garden: 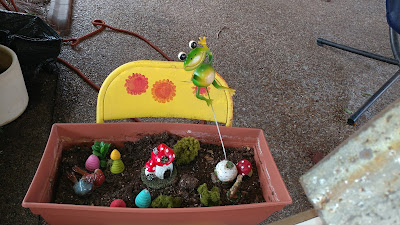 Be Kind to Humankind Week: Sacrifice Our Wants For others Needs Sunday BK2HK.org

European leaders, in an attempt to end war "for all time", outlaw the crossbow, 1146
One of the largest naval battles in history, during the last decade of the ailing, Mongol-led Yuan Dynasty, begins between the forces of two Chinese rebel leaders, 1363
Capture of the entire Dutch fleet by British forces under the command of Sir Ralph Abercromby and Admiral Sir Charles Mitchell, 1799
Founding of Melbourne, Australian, 1835
Founding of Houston, Texas, 1836
Hubert Cecil Booth patents the vacuum cleaner, 1901
The Lake Pontchartrain Causeway in south Louisiana, the longest bridge over water (continuous, not aggregate) that is not also a viaduct, opens, 1956
The Hotline between the leaders of the U.S.A. and the Soviet Union goes into operation, 1963
Thurgood Marshall is confirmed as the first African American Justice of the United States Supreme Court, 1967
Guion Bluford becomes the first African American astronaut in space, 1983
NATO launches Operation Deliberate Force against Bosnian Serb forces, 1995
A commercial expedition to raise part of the sunken British luxury liner Titanic ended in failure, 1996
Harley-Davidson celebrates its 100th anniversary in Milwaukee with a parade of 10,000 motorcycles, 2003
India and Pakistan agree to release hundreds of fishermen and other civilians in each other's jails as part of their ongoing attempts to negotiate peace between their nations, 2005
Sumatra's Sinaburg volcano continues to erupt, two people are killed and 21,000 are evacuated from the vicinity, 2010
In Chile, 33 miners trapped half a mile beneath the surface make contact with their families for the first time in the three weeks since the incident, 2010
Late author Terry Pratchett’s unfinished works are destroyed as per his request, 2017
For the second time, Ukrainian amateur astronomer Gennady Borisov discovers an interstellar comet, 2019
Posted by messymimi at 12:00 AM

We get toadstools when it's been wet.

A testament to the nature of man that we've been attempting to "end war forever" for at least 900 years, with absolutely zero success, but renewed hope each time...

We don't often toss too much away here. Those are some interesting goodies, love that Aladdin's lamp!

I just love your Cajun jokes and this week's is great - partly because I don't see the point of lettuce! As for the flowers, simply beautiful!

Your grandpa sounds quite comical :-)

I liked the joke hahah!

I liked the pics too

The Grandpa story is too funny. I have the opposite problem with my hubby. He is always taking things out of the trash that I toss. I threw away a rusty dish strainer yesterday and threatened him if he picked it out :)

I often wonder about the lettuce I buy too. Should I buy it to throw away later or just not buy it. In the winter I just don't buy it.
I love the frog in the fairy garden :)
How does one paint tea leaves?