Putting It Where It Goes (Cajun Joke) and Sunday Selections

Grandpa is exceptionally well organized.  Grandma is ... not.

Grandpa has every password for everything that needs a password in a hidden place in a locked drawer, with copies in the home safe and the bank vault, and he updates them every 3 months to make sure he hasn't changed anything without noting it in all 3 places.

When Grandma goes, you can kiss her gadgets good-bye, no one will have any clue where to find any passwords or pin codes.

Grandpa's office is a study in exactness of everything.

These days, i cannot seem to get it together enough to have a theme for my Sunday Selections. 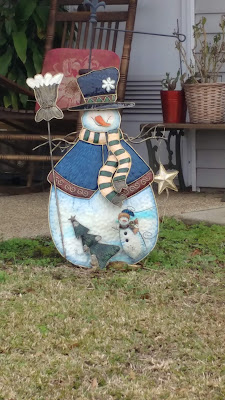 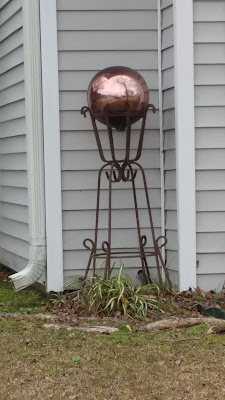 Ms. PA has an owl candle holder and a few refrigerator magnets, i thought Mother Owl might enjoy seeing them. 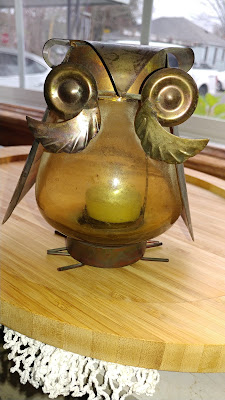 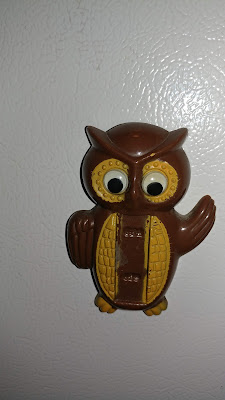 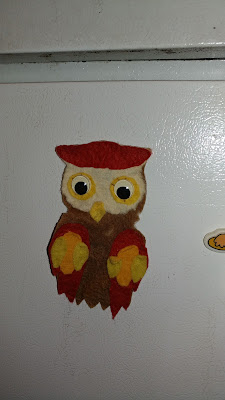 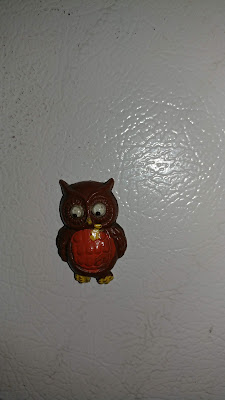 Valentines and Mardi Gras are close enough this year that the decor is in competition in some places. 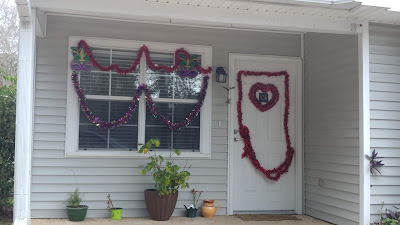 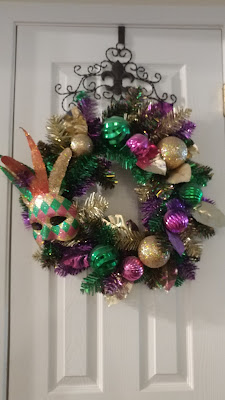 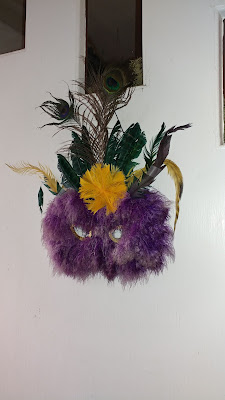 When i say the vacuum cleaner i borrowed was old, i meant it. 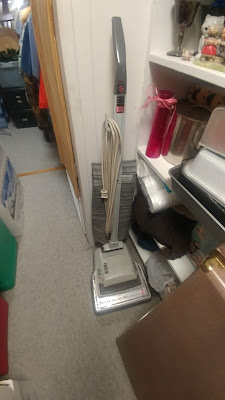 Here's a nice idea for preserving a child's artwork, make it a cup. 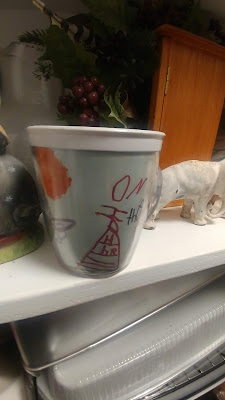 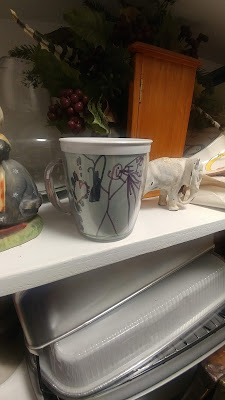 We've been hearing an odd groaning noise on windy days, and i finally tracked it to a neighbor's tree.  It looks like some of the aluminum skirting from the school's temporary building ended up stuck in the tree and they can't get it down. 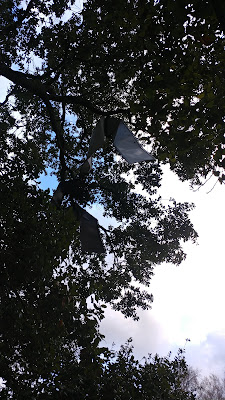 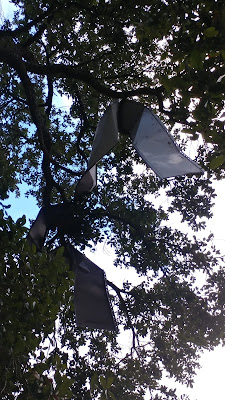 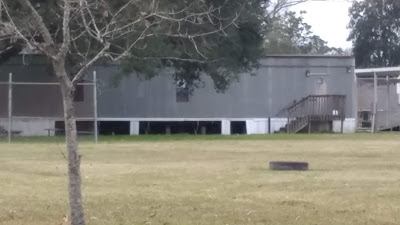 Finally, some sunset photos, and one shot in the other direction to catch the moon. 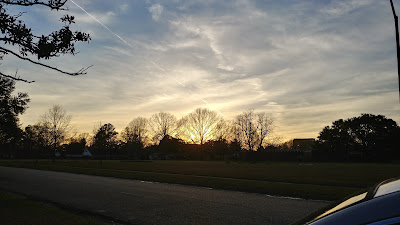 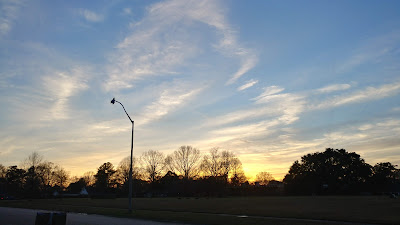 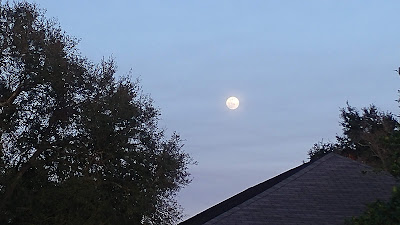 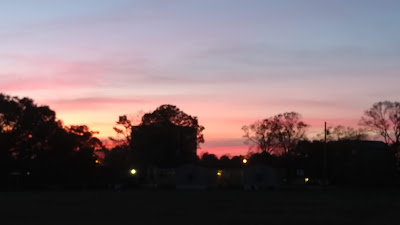 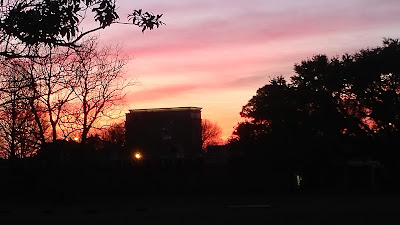 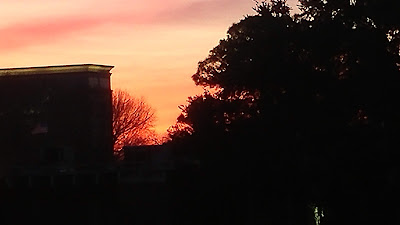 Backward Day -- no info on the origin, but if you want to do something backward, go ahead

Eat Brussels Sprouts Day --  saute in olive oil with some garlic, they are worth it!

Eve of Brigantia -- Ireland (St. Bridget's Eve, the night when she crosses the countryside and bestows blessings)

Feast of Great Typos -- another that no one will claim inventing, but since we've all made them, we may as well celebrate them

National Bug Busting Day -- UK (this is one idea that needs export to the whole world! the aim is to have every child checked for head lice on the same day, and thus get rid of them in one fell swoop, so they don't circulate endlessly; when this date is on a weekend, the checking is done on the next school day)

National Gorilla Suit Day -- Mad Magazine's Maddest Artist, Don Martin, says this is the day to pull that gorilla suit out of the closet and step out in style.

Phlegm-Green, Moldy-Grey, and Gazzard Day -- Fairy Calendar (don't ask what color Gazzard is, it doesn't exist in the human world, and you don't want it to)

Play An Old Game You Haven’t Played in Years Night -- internet generated, and a great idea

Guy Fawkes is executed for his plotting against Parliament and James I of England, 1606

The Corn Laws (tariffs on imported grains) are abolished in Britain, paving the way for more free trade, 1849

The United States orders all Native Americans to move into reservations, 1876

The Bulletin of Sydney is founded, publishes for 128 years, 1880

Scotch tape is first marketed by the 3M Company, 1930

Ida May Fuller of Ludlow, Vermont, US receives the first US Social Security monthly payment check, for $22.54, 1940

Explorer 1 – The first successful launch of an American satellite into orbit, 1958

The Soviet Union launches the unmanned Luna 9 spacecraft as part of the Luna program, 1966

Astronauts Alan Shepard, Stuart Roosa, and Edgar Mitchell, aboard a Saturn V, lift off for a mission to the Fra Mauro Highlands on the Moon, 1971

The first McDonald's in the Soviet Union opens in Moscow, 1990

NASA reveals the Regolith Advanced Surface Systems Operations Robot (RASSOR), a lunar mining robot which could be used to produce fuel and water directly on the Moon, 2013

The United Kingdom formally withdraws from the European Union, 2020