Grandma continues to improve and is up and about more and more each week.  She is proving what Grandpa has said for years, "It's a great life if you don't weaken!"

Boudreaux be lookin' like hims be sad, an' Thibodeaux done come by an' ax, "Boudreaux, what be de matter?  You lookin' like you done los' you bes' frien', but since I be here I know dat ain't so.  What be wrong?"

An' Thibodeaux say, "Mais, now you can get you de job as de umpire at de local baseball game!"

Sunday Selections was started as a way for bloggers to use photos that might otherwise just languish in their files.  The rules have been relaxed, and it is now simply a showcase for your photos, new or old, good or bad, although nothing rude, please.  It was hosted by River, who still participates, and is now hosted by Elephant's Child.  Charlotte/Mother Owl also posts sometimes.

Grandma has started working on her art again, there were some mushrooms down by the creek that caught my eye, Mr. BA's garden is blooming (and i included his wind chimes, just because), and of course, sky photos, a couple at sunrise, mostly at sunset because i can see the sunset better from here. 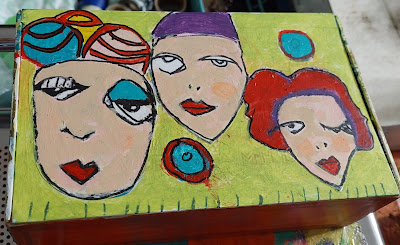 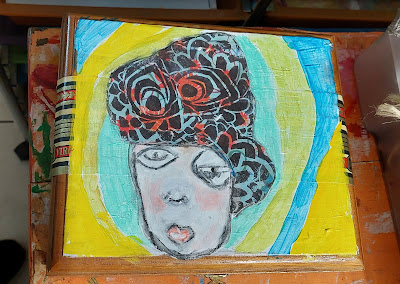 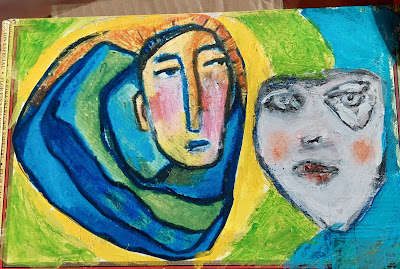 The young Emperor Antoku and three sacred treasures are taken by Taira no Munemori and the Taira clan, fleeing to western Japan to escape pursuit by the Minamoto clan, 1183

Kublai Khan's invading fleet disappears in a a typhoon near Japan, 1281

Queen Elizabeth I refuses sovereignty of the Netherlands, 1585

Second Seminole War ends, with the Seminoles forced from Florida to Oklahoma, 1842

Construction of Cologne Cathedral in Cologne, Germany, is completed, 1880

A recording of English composer Arthur Sullivan's The Lost Chord, one of the first recordings of music ever made, is played during a press conference introducing Thomas Edison's phonograph in London, 1888

The first claimed powered flight, by Gustave Whitehead in his Number 21, 1901

Longest game in softball history begins, as The Gager's Diner team takes on the Bend'n Elbow Tavern; the game was played to raise money for a new softball field in Monticello, NY, went to 365 innings over two days, and the Gagers won 491-467, 1976

Widescale power blackout in the northeast United States and Canada, 2003

More than 2,000 people found in Poland's largest mass grave during World War II are reburied in a military cemetery, 2009

As a sponsored event of the IOC, the 2010 Summer Youth Olympic Games, first ever Youth Olympics for athletes age 14-18, officially starts in Singapore, 2010

According to a survey published by the US Department of the Interior and the US Geological Survey, 90% of rain samples taken in Colorado have plastic in them, 2019

Stephanie Frappart of France becomes the first woman to referee a major men's football/soccer match in a European men's tournament, 2019