Two of the decorations from the baby shower yesterday: 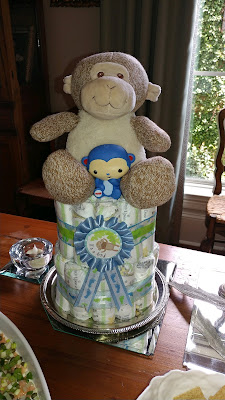 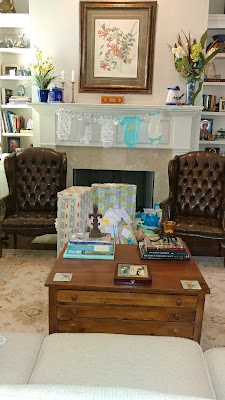 Pledge Across America Day -- US (beginning of Constitution Week, every school is invited to join a synchronized Pledge of Allegiance across the whole nation, from 8am Hawaiian time to 2pm Eastern; schools also have an exercise of some kind about the US Constitution)
on the anniversary of the ratification of the U.S. Constitution on Sept. 17, 1787, or on the school day nearest if it's a weekend

Christopher Columbus lands at Costa Rica on his 4th and final voyage, 1502
Ft. Ticonderoga, NY opens, 1755
The British capture Quebec City, 1759
John Harris builds the first spinet piano in the US, 1769
President Washington lays the cornerstone of the Capitol Building, 1793
Royal Opera House in London opens, 1809
A horse beats the first US made locomotive, near Baltimore, 1830
Tiffany and Co. (first named Tiffany & Young) is founded by Charles Lewis Tiffany and Teddy Young in New York City; the store is called a "stationery and fancy goods emporium", 1837
Pittsburgh Post-Gazette is first published, 1842
First publication of The New-York Daily Times, which later becomes The New York Times, 1851
Old Faithful Geyser is observed and named by Henry D. Washburn during the Washburn-Langford-Doane Expedition to Yellowstone, 1870
The banking firm of Jay Cooke & Co. in Philadelphia declares bankruptcy, which starts the Panic of 1873 and a severe economic depression, 1873
The Blackpool Illuminations are switched on for the first time, 1879
Riots break out in Montreal to protest against compulsory smallpox vaccination, 1885
In appreciation for all she had done for the tribe, Harriet Maxwell Converse, adopted as a member of the Seneca tribe, is made a chief of the Six Nations Tribe at the Tonawanda Reservation, 1891
Daniel David Palmer gives the first chiropractic adjustment, 1895
A typhoon with tsunami kills an estimated 10,000 people in Hong Kong, 1906
The Irish Home Rule Act becomes law, but is delayed until after World War I, 1914
The Netherlands gives women the right to vote, 1919
The Columbia Broadcasting System goes on the air, 1927
Juan de la Cierva makes the first autogyro crossing of the English Channel, 1928
Margaret Chase Smith of Maine becomes the first woman elected to the US Senate without completing another senator's term, 1948
Fidel Castro arrives in New York City as the head of the Cuban delegation to the United Nations, 1960
U.N. Secretary-General Dag Hammarskjöld dies in a plane crash, 1961
Burundi, Jamaica, Rwanda and Trinidad and Tobago are admitted to the United Nations, 1962
The Bahamas, East Germany and West Germany are admitted to the United Nations, 1973
Hurricane Fifi strikes Honduras with 110 mph winds, killing 5,000 people, 1974
Voyager I takes first photograph of the Earth and the Moon together, 1977
Soyuz 38 carries 2 cosmonauts (including 1 Cuban) to Salyut 6 space station, 1980
Joe Kittinger completes the first solo balloon crossing of the Atlantic, 1984
Liechtenstein becomes a member of the United Nations, 1990
ICANN is formed, 1998
The 72 year run of the soap opera The Guiding Light ends as its final episode is broadcast, 2009
Chileans celebrate the 200th anniversary oof their independence, 2010
After a large storm that took the roof off of Stadium Southland in Invercargill, 100,000 people in New Zealand are left without water, 2010
Posted by messymimi at 12:00 AM