Of Course I Think I'm a Peach! (Wordless Wednesday) 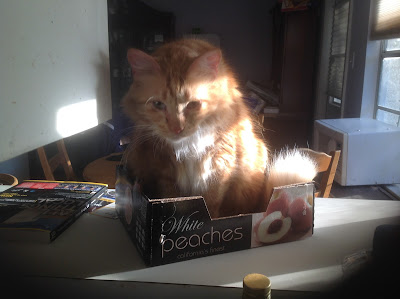 Birthday of the Sun -- Inca (date approximate; a few days before the Autumn Equinox, all fires, including that at the Temple of the Sun, were extinguished and 3 days later ceremonially relighted using only glass to concentrate the sunlight on cotton; followed by 8 days of feasting)

Eleven Days of Global Unity -- Day 10, Disarmament (sponsored by We, the World)

Genesia -- Ancient Greek Calendar (festival to honor the dead, especially those who died in wars)

National Farm Safety Day -- US (can't find a sponsor, but farming is hard, and dangerous, work, so it's a good idea)

National School Backpack Awareness Day 2017 -- US (or anywhere else that you want to weigh your child's backpack on the 3rd Wednesday of September, to make sure it's not heavy enough to hurt them)

Rosh Hashanah -- Judaism (begins this evening; through the evening of the 22nd)

Vegetarian Festival -- Phuket, Thailand (lots of purification rituals and a rigid vegetarian/vegan diet are observed for spiritual cleansing and ensuring good luck; through the 28th)

Atilla the Hun defeated at Chalons-sur-Marne by General Aetius, 451
Saladin begins the siege of Jerusalem, 1187
Ferdinand Magellan sets sail from Sanlúcar de Barrameda with about 270 men on his expedition to circumnavigate the globe, 1519
Galileo Galilei is tried before the Congregation for the Doctrine of the Faith for teaching that the Earth orbits the Sun, 1633
Maryland passes the first "anti-amalgamation" law to stop English women from marrying black men, 1664
The Negro Convention of Free Men agrees to boycott slave-produced goods, 1830
The American Association for the Advancement of Science is created, 1848
The Indian Rebellion of 1857 ends with the recapture of Delhi by troops loyal to the East India Company, 1857
The first gasoline-powered car debuts in Springfield, Massachusetts, United States, 1891
The Otis Elevator Company unveils the first escalator at the Paris Exposition, 1900
Cunard Line's RMS Mauretania is launched, 1906
The first Cannes Film Festival is held, 1946
James Meredith, an African-American, is temporarily barred from entering the University of Mississippi, 1962
The RMS Queen Elizabeth 2 is launched, 1967
Billie Jean King beats Bobby Riggs in The Battle of the Sexes tennis match, 1973
The Socialist Republic of Vietnam joins the UN, 1977
Walt Disney World hosts its 200 millionth guest, 1985
U.S. President George W. Bush declares a "war on terror", 2001
The US Military ends its "Don't Ask, Don't Tell" policy, 2011
President Ram Baran Yadav signs Nepal's new constitution into law in Kathmandu, 2015
Posted by messymimi at 12:00 AM

Why do cats love boxes so much?

Joeh, if i could answer that completely, i'd be a cat behaviorist. It has something to do with feeling comfortable in small spaces that seem to them to be protected from larger predators that will hunt them, is my best guess.

Such a cute cat! Have a beautiful day!

I think you're a peach too. Yes indeed.

Have a purrfect Wordless Wednesday. ☺

Today is the beginning of "Bikes, Blues, & BBQ in Fayetteville,AR and extending throughout NW Arkansas. This is the 18th year of one of the nation's largest motorcycle rallies. I will be out photographing some of the iron horses over the next few days.

definitely a peach! Even the right color!

The photo is even prettier because of the sunlight catching that lovely ginger fur!

I wonder why cats are so attracted to boxes. They must feel safe in them.