'Tis the Season/Did I Really See That? (Wordless Wednesday) 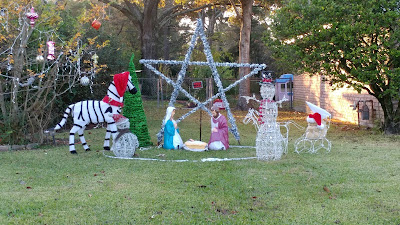 Between the extra work and the difficulties with transportation this week, i have not had a chance to compose a Words for Wednesday story, i will try to use both sets of prompts next week.

Birth of Prophet Mohammad and of Imam Sadegh -- Iran

The Mongols under Batu Khan occupy and destroy Kiev, 1240
Don Alfonso V of Aragon grants Barcelona the right to exclude Jews, 1424
The first edition of the Encyclopedia Brittanica is published, in Scotland, 1768
Harriet Tubman escapes slavery, 1849
The 13th Amendment to the US Constitution is ratified, abolishing slavery, 1865
The first crematorium in the Us begins operation, in Washington, Pennsylvania, 1876
London becomes the first city to license taxicabs, 1897
One year to the day after the signing of the Anglo-Irish Treaty, the Irish Free State comes into existence, 1922
U.S. federal judge John M. Woolsey rules that the James Joyce's novel Ulysses is not obscene, 1933
The Vanguard rocket, the first US attempt to launch a satellite, fails, 1957
The Canadian province of Newfoundland is renamed Newfoundland and Labrador, 2001
NASA reveals photographs taken by Mars Global Surveyor suggesting the presence of liquid water on Mars, 2006
Belgium's new federal government is sworn in after 541 days of negotiations, 2011
Posted by messymimi at 12:00 AM

I can't believe there is a patron saint for pawnbrokers?

Nice photo, we have our tree up now ( my task every year since it gives everyone else in our house a rash). Thanks for sharing :)

Christma is coming Mimi and the temperature this morning is 12 degrees F. Cold, cold, cold. See ya my friend.

Cute little display. I guess it is the season. I've been disgusted by news stories about lowlifes stealing packages off of porches and even taking Christmas decorations! How wrong has our world become?

Yes, you really saw that. Cute.

You're still in my prayers. I hope the money and transportation issues ease and soon.

Have a blessed day. ♥

How cute is that photo heheh!

I hope you get your transportation probs fixed very soon

I'm sure that stops traffic.

National Gazpacho Day? Who comes up with these?

It is beginning to look a lot like Christmas- Interesting photo

I love that there is a special needs day for kids with disabilities to be able to visit with Santa.

"Rudolph the Red Nose Reindeer" aired the year I turned 3 and I'll be celebrating my bday next week. I remember watching this Christmas special when I was very young. I sat in my grandparents too cool, dark living room with my eyes glued to their tiny B&W TV set. :) Happy WW a day late!

Happy Weekend coming to you,
A ShutterBug Explores,
aka (A Creative Harbor)