Zippy at the Shelter (Feline Friday) and Friendly Fill-Ins

Zippy is up for adoption.  We hope he gets a new home quickly. 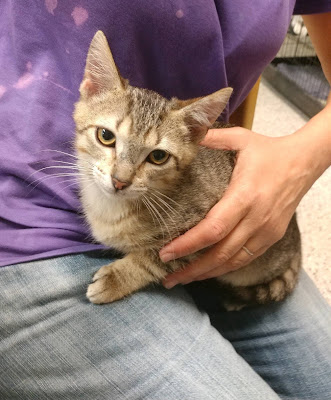 I can’t wait to see the sextons at our church open our gifts to them, except that i will be out of town and Sweetie will pass them on, so i won’t really get to see it.

I have had the same husband for over 32 years.  In other words, forever.  (He says the same thing, it’s our joke.)

I would not mind if Santa were to bring me enough money to truly fix our house.

On Christmas Eve, i always ... well, i always used to.  We would put out milk and cookies for Santa when the kids were little.  Also, i used to always go to the candlelight Christmas Eve service.  This year, i will be watching the service remotely, as i’m staying with Grandma and Grandpa over the weekend.  That may well become my new tradition.

A serious earthquake strikes Innsbruck, 1689
The Turkish fortress of Izmail is stormed and captured by Suvorov and his Russian armies, 1790
The first freight train is operated in Roorkee, India, 1851
Jules Janssen flies in a balloon in order to study a solar eclipse, 1870
The first string of Christmas tree lights is created by Thomas Edison, 1882
Ito Hirobumi, a samurai, becomes the first Prime Minister of Japan, 1885
French officer Alfred Dreyfus is court-martialed for treason, which triggers worldwide charges of anti-Semitism (Dreyfus was later vindicated), 1894
Colo is born, the first gorilla to be bred in captivity, 1956
Berlin's Brandenburg Gate re-opens after nearly 30 years, effectively ending the division of East and West Germany, 1989
Richard Reid attempts to destroy a passenger airliner by igniting explosives hidden in his shoes aboard American Airlines Flight 63, 2001
An important peer-reviewed study of the spatial memory of bumblebees is published in the Biology Letters journal of the Royal Society by a class of 25 8- to 10-year-old children at Blackawton Primary School, 2010
Ebola vaccine VSV-EBOV is found to be 70-100% effective in a study published in The Lancet, becoming the world's first proven vaccine against Ebola, 2016
Posted by messymimi at 12:00 AM

My allergy to cats makes me not a big cat fan, but that little one is very cute and should be adopted soon.

I remember one year Santa broke my chimney whilst trying to get down it - he'd obviously had too many mince pies. I'm still waiting for him to bring me the money to fix it! Have a joy-filled festive season.

I am sure Zippy will get a good home very soon looking so cute there :-)

Wishing a good home and loving family for Zippy.

I hope Zippy get his forever home by Christmas. Thank you for participating in the fill-ins, I hope Santa is good to you. I like that you can see your church services even though you won't be there. Have a wonderful Christmas! XO

He's sure a cutie pie. I hope he finds a forever home before Christmas.

Have a purrfect Feline Friday. ♥

I bet Zippy is scooped up real fast.

Merry CHRISTmas to you and yours! I sure hope Zippy finds his forever home. What a beauty he is. HUGS

Oh, Mimi. You rock. I feel your pain on house issues. We plan to whittle away at ours next year. We started some projects, but there are still more. *sigh*
I am still playing catch up! Bill is back on the road. He will have another long weekend for the New Year weekend. I will be unplugged then, too. Routine will come back after the holidays. Until then, enjoy! I hope your holidays and New Year are filled with many blessings. Hugs!