Lulu sits by the table, ever hopeful: 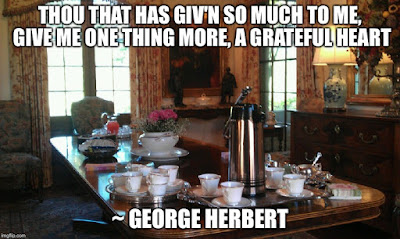 Lundi Gras -- Fat Monday, Carnival, one of the last to days to feast before the Lenten fast begins Wednesday
Bolludagur -- Iceland (Bun Day, the children wake the parents with a "spanking" while calling for cream buns that will be eaten that day)
Old Mask Parade -- Oranjestad, Aruba (with the Burning of the Momo tomorrow, marking the end of Carnival)
Rosenmontag -- German-speaking Countries (Rose Monday, highlight of Karneval)

Vasco da Gama sets sail from Lisbon, Portugal, on his second voyage to India, 1502
Santiago, Chile, is founded by Pedro de Valdivia, 1541
A year after claiming the throne of England for nine days, Lady Jane Grey is beheaded for treason, 1554
The Onderlinge van 1719 u.a., the oldest existing life insurance company in the Netherlands is founded, 1719
Englishman James Oglethorpe founds Georgia, the 13th colony of the Thirteen Colonies, and its first city at Savannah, 1733
The first US fugitive slave law, requiring the return of runaway slaves, is passed, 1793
The Teatro di San Carlo, the oldest working opera house in Europe, is destroyed by fire, 1816
The Creek Indian treaty is signed, requiring the tribes to turn over all of their land in Georgia to the government and migrate west by Sept. 1 the following year, 1825
Ecuador annexes the Galapagos Islands, 1832
Official proclamation sets April 15 as last day of grace for US silver coins to circulate in Canada, 1870
The US Congress abolishes bimetallism and authorizes $1 and $3 gold coins, 1873
King David Kalakaua of the Sandwich Islands/Hawaii becomes the first king to visit the US, 1874
The first news dispatch by telephone takes place, between Boston and Salem, Massachusetts, 1877
News of the Battle of Isandlwana, the single greatest defeat for the British Army at the hands of a native army, reaches London, 1879
The New York to Paris auto race, via Alaska and Siberia, begins; George Schuster wins after 88 days behind the wheel, 1908
The National Association for the Advancement of Colored People (NAACP) forms, 1909
The last Ch'ing (Manchu) emperor of China, Hsuan T'ung, abdicates, 1912
A meteor creates an impact crater in Sikhote-Alin, in the Soviet Union, 1947
U.S.S.R. launches Venera 1 towards Venus, 1961
Aleksandr Solzhenitsyn, winner of the Nobel Prize in literature in 1970, is exiled from the Soviet Union, 1974
Carmen Lawrence becomes the first female Premier in Australian history when she becomes Premier of Western Australia, 1990
NEAR Shoemaker spacecraft touchdown in the "saddle" region of 433 Eros becoming the first spacecraft to land on an asteroid, 2001
The city of San Francisco, California begins issuing marriage licenses to same-sex couples in response to a directive from Mayor Gavin Newsom, 2004
The 21st Winter Olympic Games open at Vancouver, Canada, 2010
North Korea allegedly conducts its third nuclear test, saying it was a nuclear device that could be weaponized, 2013
Intel entrepreneur and co-founder of the X-PRIZE Foundation, Peter Diamandis, claims that 50% of US jobs are under threat of being mechanized within 10 years, 2014
Pope Francis meets with Patriarch Kirill, the first meeting between Catholic and Russian Orthodox church heads for nearly 1,000 years, 2016
Posted by messymimi at 12:00 AM

Good Morning sweet friend and happy Awww Mondays to you!

Thanking you most sincerely,
I'm sending you and Lulu my dearest hug

What a good dog that is for sure. Love your Spark. That is a good one. You all have a wonderful Monday.

Thanks for the reminder about the Westminster Dog Show. Our Lucy, like Lulu hangs in the kitchen during food prep, hoping something will hit the floor. We don't feed her from the table, but her dog food is nearby and she often eats at the same time as we are having our meal.

That is an excellent Spark. I hope Lulu got a treat :)

Always a great post and kitty photos so precious ~

Lulu reminds me of our precious Little Bit. She loved to beg for food too. A wonderful memory.

I love the spark. You can have so much but you have nothing without the grateful heart.

Amen and amen, to that Spark, Mimi! If only we are thankful, then we realize the many ways in which we are blessed. I know you do, your TToT post each week shows me that! <3

what a sweet dog. Ever hopeful for sure! Have a lovely day!

My dog was always ever hopeful too. I do have a grateful heart for having a great family and living a comfortable life.

Somehow I think Lulu is rarely disappointed. Spark is the truth.

Unfortunately there are many who do not have a grateful heart for all they've been given. These individuals always want more and never seem to be satisfied which is sad.

Yesterday was National Oatmeal Day? LOL I had a bowl of oats with walnuts, raisins, and a drizzle of maple syrup. Yum, Yum!

What a sweet and patient looking dog. - Trying to be "grateful" today but sometimes it's hard. Thanks for the reminder.