Just because Sandee of Comedy Plus is no longer hosting Silly Sunday, don't expect me to quit telling Cajun jokes.

We have a person at our Friday morning Bible study named Harry, and he is always cracking wise.

This past Friday, the topic of a particular person came up, and Harry noted that the man's father had been both the pastor of the church and owned the funeral home in a small town.

As we all laughed, Joan said, "Ms. S, you've been sitting next to Harry too long and it has rubbed off!"

Dere had done been a death in de fam'ly, Boudreaux's great-aunt, an' so Boudreaux an' Clothile an' de two chil'ren be in de car followin' along in de procession.

Allus sudden, Alene ax Boudreaux, "Père, what would happen to us if you die?"

An' Tee tell his Soeur, "Mais, den we would be in de limousine instead o' our car!"

Grandma is a fan of frogs (and the occasional pig): 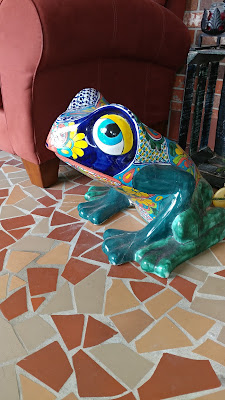 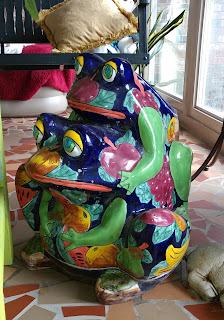 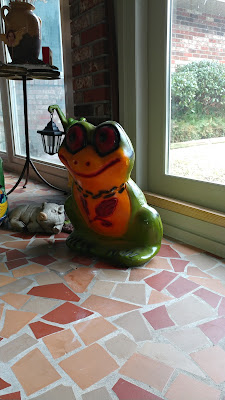 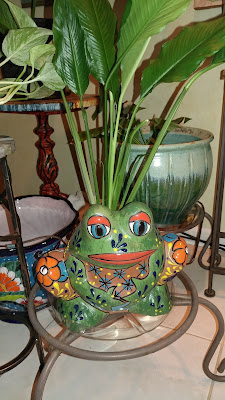 Festival of Women -- Persian (traditional, it has been kept even amont those who are no longer Zoroastrian)

Origin of the Kali Yuga Epoch ("age of vice" or Dark Age) of the Hindu/Buddhist calendars, BC3102
Jerusalem is taken by Emperor Frederik II, 1229
Amda Seyon I, Emperor of Ethiopia, begins his campaigns in the southern Muslim regions, 1332
Henry Tudor (Henry VIII) created Prince of Wales, 1503
Zeeland falls to Dutch rebels, 1574
John Bunyan's "Pilgrim's Progress" is published, 1678
Fort Saint Lewis, Texas, is founded by Frenchmen under LaSalle at Matagorda Bay, the basis for France's claim to Texas, 1685
Quakers conduct their first formal protest of slavery in Germantown, Pennsylvania, 1688
The premiere of George Frideric Handel's oratorio, "Samson" takes place in London, 1743
Trinidad is surrendered to a British fleet under the command of Sir Ralph Abercrombie, 1797
The Detroit Boat Club (still in existence) forms, 1839
The first continuous filibuster in the US Senate begins, lasts until March 11, 1841
The first regular steamboat service to California begins, 1849
A direct telegraph link between Britain and New Zealand is established, 1876
Mark Twain's "Adventures of Huckleberry Finn" is published, 1885
The Cave of Winds at Niagara Falls goes almost dry for the first time in 50 years, 1896
Winston Churchill makes his first speech in the British House of Commons, 1901
H. Cecil Booth patents a dust removing suction cleaner, 1901
The first official flight with air mail takes place in Allahabad, British India, when Henri Pequet delivers 6,500 letters to Naini (a distance of about 10K), 1911
The US and Canada begin formal diplomatic relations, with the appointment of Vincent Massey as the first Canadian ambassador to the US, 1927
The first Academy Awards are announced, 1929
While studying photographs taken in January, Clyde Tombaugh discovers Pluto, 1930
The first Church of Scientology is established in Los Angeles, California, 1954
The Space Shuttle Enterprise test vehicle is carried on its maiden "flight" on top of a Boeing 747, 1977
Snow falls in the Sahara Desert in southern Algeria for the only time in recorded history, 1979
Dan Jansen skates world record 1000m (1:12.43), 1994
Pope Benedict XVI announces seven new saints - including American saint Kateri Tekakwitha - and appoints 22 new cardinals, 2012
Posted by messymimi at 12:00 AM