Letting Out Their Wild Side (Feline Friday) and Friendly Fill-Ins

Some of the kittens at the shelter were feeling their oats this week: 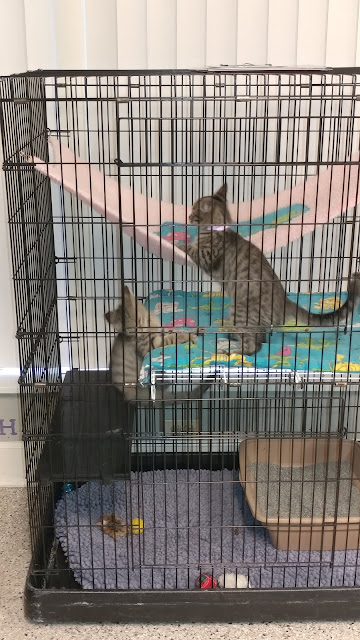 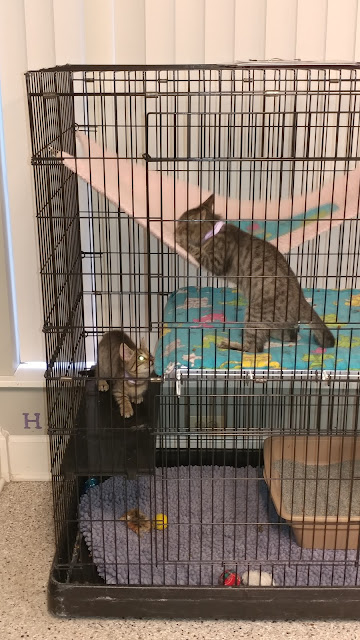 My Chinese zodiac animal is, from the chart on McGuffy's Reader, the rabbit.  Sweetie's is the snake.  Maybe that explains a few things, but i doubt it.

My zodiac sign is (pardon me while i check to make sure) the crab, Cancer.  Sweetie is a Scorpio (thus my delight in the holiday on November 18 called "Married to a Scorpio Support Day").  No, i don't believe these signs explain much, either.

Income tax season (pardon me while i run screaming from the room [Sound of retreating footsteps.  Door slam.  Muffled scream.  Door opening.  Sound of approaching footsteps.] there, that's better) could probably be a lot worse, but i would rather not know how.

In hindsight, i should have started saving for retirement a lot earlier, and so should everyone else.

Losar/Loshar (Lunar New Year) -- Bhutan; Nepal; Tibet (this is Tibetan Year 2145, and it's dominant gender is male, dominant element is earth, and dominant animal is the dog)

National Date Festival -- Indio, CA, US (a most exotic county fair, the date comes from the land of the Arabian Nights and this festival celebrates all aspects of the theme; through the 25th)

9th recorded perihelion passage of Halley's Comet, 374
Pope Gregory the Great issues a decree saying that "God bless you" is the correct response to a sneeze, 600
English king Charles I accepts Triennial Act, requiring the king to assemble Parliament at least once every 3 years, 1641
The first known check (cheque) is written, for 400 English Pounds Sterling (currently on display at Westminster Abbey), 1659
Kentucky passes a law permitting women to attend school under certain conditions, 1838*
Weenen Massacre: Hundreds of Voortrekkers along the Blaukraans River, Natal are killed by Zulus, 1838
American Charles Wilkes discovers Shackleton Ice Shelf, Antarctica, 1840
The Battle of Sobraon ends the First Sikh War in India, 1846
Studebaker Brothers wagon company, precursor of the automobile manufacturer, is established, 1852
The French Government passes a law to set the A-note above middle C to a frequency of 435 Hz, in an attempt to standardize the pitch, 1859
The Benevolent and Protective Order of Elks forms, 1868
The "Ladies Home Journal" begins publishing, 1883
The first Chinese daily newspaper in the US, Chung Sai Yat Po, begins publication in San Francisco, 1900
The first US Esperanto Club organizes in Boston, 1905
The first synagogue in 425 years opens in Madrid, Spain, 1917
Howard Carter unseals the burial chamber of Pharaoh Tutankhamun, 1923
The first patent is issued for a tree, to James Markham for a peach tree, 1932
Wallace H. Carothers receives a United States patent for nylon, 1937
Canadians are granted Canadian citizenship after 80 years of being British subjects. Prime Minister William Lyon Mackenzie King becomes the first Canadian citizen, 1947
Britain abolishes the death penalty, 1956
Fidel Castro becomes Premier of Cuba after dictator Fulgencio Batista was overthrown on January 1, 1959
In Haleyville, Alabama, the first 9-1-1 emergency telephone system goes into service, 1968
The first computer bulletin board system is created (CBBS in Chicago, Illinois), 1978
The trial of John Demjanjuk, accused of being a Nazi guard dubbed "Ivan the Terrible" in Treblinka extermination camp, starts in Jerusalem, 1987
The Kyoto Protocol comes into force, following its ratification by Russia, 2005
The last Mobile Army Surgical Hospital (MASH) is decommissioned by the United States Army, 2006
Posted by messymimi at 12:00 AM