Just because Sandee of Comedy Plus has quit hosting a Silly Sunday blog hop, don’t expect me to quit telling Cajun jokes.

There was an accident after church last week.  One of the pastors got home and fell on his stairs going up to the house and broke his arm.  He's going to recover, it's just the difficulty of dealing with a broken limb.

Tee Boudreaux be done like mos' young boy, he allus be climbin' de trees an' takin' chances.  One day he done broke his arm, so Boudreaux an' Clothile done take him to de doctor for to get it set in de cast.

When de doctor done finish, de nurse be fittin' Tee wit' de sling.  Since Tee be a young boy, she say, "I only gots one small sling fo' de size o' you."

So de nurse say, "You right, you do be a big boy now.  Well, dis be de biggest sling we have in you size!"

It's starting to look like some holidays are coming: 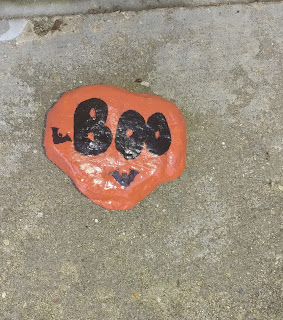 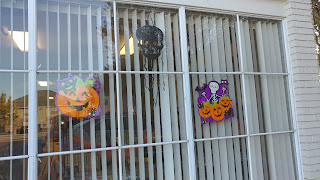 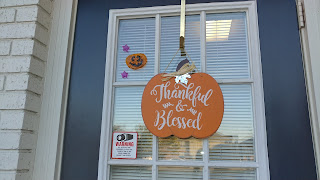 When i worked in Mr. BA's yard yesterday, he had me weeding again.  My plant killing talents are alive and well.  He tells me what to leave, and i take the rest:

LOL @ the joke I had that problem with hats ;-)

I liked your Sunday Selections pics

A cast in any size doesn't sound like much fun!

Yikes on the broken arm. Pain in the patootie too. I remember.

Love the joke. Your jokes are the very best.

Yes I noticed a lot of decorations yesterday around town. Pretty.

Have a blessed Sunday and week, my friend. ♥

Have a wonderful Sunday Mimi. See ya my friend.

Cute joke :) I love Halloween decorations. My hubby won't let me weed anymore because I pulled out good stuff- works for me :)

Ha Ha, my daughter could probably rival you with plant killing skills. I keep threatening to plant her yard with plastic blooms. She can't kill those.