Good for a Laugh (Six Sentence Story) and Good Fences

His hearty laughter from the other side of the table caused her to ask, "What's so funny this time?" as she looked up from the business section of the paper to pour herself another cup of coffee.

"Oh, it's just the comics, Peanuts, to be exact.  It always gets me when Snoopy decides to perch in a tree and pretends to be a vulture," he answered.  "And in this one, Linus tickles him on the nose to capture him and then asks Lucy what to do with the vulture once he's caught!"

"Well, I'm very glad you find it so amusing, especially since the cost of the newspaper subscription just went up again," she grumbled.

"As long as they don't get rid of the humor columns and the funnies, it's the best part of my breakfast!"

Linking up with Denise at Girlie On The Edge Blog, where she hosts Six Sentence Stories, and the cue is Perch.

This fence has always intrigued me.  It surrounds the entire house, although i could only get pictures from two sides.  This is a person who really likes his/her privacy (and yes, i was able to stop the car to take the photos): 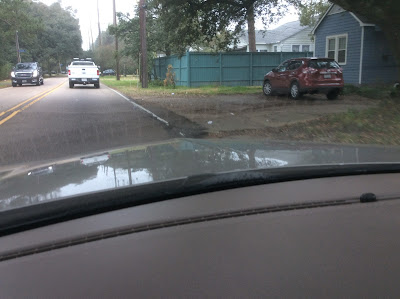 American Birkebeiner Race -- Cable to Hayward, WI, US (largest and most prestigious cross-country ski marathon; through the 24th)

Card Reading Day -- because greeting cards can be fun to just stop and read, can't they

Charro Days Fiesta -- Brownsville, TX, US and Matamoros, Mexico (Two Nations - Twin Cultures, the sister cities put on a beautiful celebration of the charro horsemen of Mexico, with dances, parades, and a carnival; through March 3)

England begins the trial against Joan of Arc, 1431
John Wilkes is thrown out of the English House of Commons for his pornographic poem "An Essay on Woman," a satire of Pope's "An Essay on Man," 1764
Freedom of worship is established in France under its Constitution, 1795
The first locomotive, Richard Trevithick's, runs for the first time, in Wales, 1804
The first Native American Indian newspaper, the "Cherokee Phoenix", begins publication, 1828
The first known sewing machine in the US is patented by John Greenough of Washington, D.C., 1842
Sarah G Bagley of Lowell, Massachusetts becomes the first US woman telegrapher, 1846
Karl Marx and Friedrich Engels publish the Communist Manifesto, 1848
The US Congress outlaws foreign currency as legal tender in the US, 1857
Edwin T. Holmes installs the first electric burglar alarm, in Boston, Massachusetts, 1858
The first Roman Catholic parish church for blacks in the US is dedicated, in Baltimore, Maryland, 1864
Lucy B. Hobbs becomes the first US woman to earn a DDS degree, 1866
Benjamin Disraeli replaces William Gladstone as English premier, 1874
The first telephone book is issued, to 50 subscribers in New Harbor, Connecticut, 1878
Oregon becomes the first US state to declare Labor Day a holiday, 1887
The North Carolina legislature adjourns for the day to mark the death of Frederick Douglass, 1895
Dr. Harvey Cushing, the first US neurosurgeon, performs his first operation, 1902
Gustav Mahler conducts his last concerto, 1911
The Battle of Verdun (WWI) begins, will last until Dec. 18; over a quarter of a million casualties, half a million injuries, 1916
The last Carolina parakeet, Incas, dies in the Cincinati Zoo, in the same cage that had held Martha, the last passenger pigeon, 4 years earlier, 1918
The Constituent Assembly of the Democratic Republic of Georgia adopts the country's first constitution, 1921
Great Britain grants Egypt independence, 1922
The first issue of "New Yorker" magazine is published, 1925
The first instant developing camera is demonstrated in NYC, by E H Land, 1947
The British government, under Winston Churchill, abolishes identity cards in the UK to "set the people free", 1952
Watson and Crick discover the structure of the DNA molecule; according to legend, they walk into the Eagle Pub in Cambridge and Crick announces "We have found the secret of Life," 1953
The Peace symbol is designed and completed by Gerald Holtom, commissioned by Campaign for Nuclear Disarmament, 1958
Malcolm X is assassinated, 1965
The Convention on Psychotropic Substances is signed at Vienna, 1971
The Soviet unmanned spaceship Luna 20 lands on the Moon, 1972
Former United States Attorney General John N. Mitchell and former White House aides H. R. Haldeman and John Ehrlichman are sentenced to prison, 1975
Steve Fossett lands in Leader, Saskatchewan, Canada becoming the first person to make a solo flight across the Pacific Ocean in a balloon, 1995
Euro zone finance ministers agree on a second bailout for Greece, 2012
Scientists announce the discovery that bumblebees have the ability to sense electric fields around flowers, enabling them to identify specific flowers for pollination, 2013
Turkey sends troops to Syria to rescue 40 guards and relocate remains from the tomb of Sulayman Shah, which is now surrounded by ISIS militants; the site is internationally recognized as Turkish territory, 2015
Posted by messymimi at 12:00 AM

For some time now I've seen you and a few other posting hotos of fences on their blog. I tried to find the origin of this, but it's lost somewere in the WWW. Can you tell a bit more for a newcomer, please?

...funny you should mention it.... (lol). the comics in the paper are a source of amusement and aggravation and... and, an interesting window on the change of culture over time.
fun Six

I think the Cincinnati Zoo needs to get rid of that cage...!
(Maybe donate it to the highly-fenced yard?)

I love Snoopy! He dares to be what's unexpected. Great six. I liked this prompt/cue word.

I love your fences. I should send a picture of mine.

Comics. Whoever decided they should be part of the daily/weekly newspaper was genius. We need a little levity to offset the news, the bulk of which is simply horrific.
Good SSS!

That is an awesome fence. However, these days, their privacy is probably over with drones flying everywhere.

I always go to the comic section first. I love Peanuts and Snoopy!

The comics and dear abby.. you can have the rest of my paper too.. Nice write.

Ah yes, humor. What would we do without humor. It's part of my life. Enjoy your day Mimi. See ya.

Yes to the funnies, although over the years the are not as funny.

I loved the comics the best about the newspaper too. We quit taking the newspaper years ago. I had so many favorite comics. Peanuts was one of them.

That's a very high fence. I'd want the privacy too.

Well done. Our paper keeps going up too.

"Turkey sends troops to Syria to rescue 40 guards and relocate remains from the tomb of Sulayman Shah, which is now surrounded by ISIS militants; the site is internationally recognized as Turkish territory, 2015"

We are still trying to solve problems of Syria. :(

I enjoyed your six. It has been a while since having newspaper funnies in hand, but this brought it all back.