Yesterday was another visit to Grandma and Grandpa, and the regular housekeeper did come so most things were clean.  The dog, Lulu, sheds so much that i always vacuum anyway and get enough hair to knit a litter of puppies if we needed one.

The plants needed watering, and the oven set to clean, neither of which i expect their housekeeper to do.  It would be nice if she could catch the "man misses" in the restroom, if you know what i mean.  Being a janitor, i tend to see things that get missed and wonder how someone can declare certain things clean when i would not count them so.

Aline done be wantin' to go her to de movin' picture, so she done be pesterin' her Père, Boudreaux, axin' fo' money to go wit' de frien's.

Boudreaux done tol' her she gots to do her chore, she suppose to clean her out de space unner de kitchen sink.  Aline done got mad, but she know it don' be no use to argue, so she gone in de kitchen, an' Boudreaux done hear her mutter an' huff while she be cleanin' in dere.

Fin'ly she done come out de kitchen an' say, "Dere, I done did my chore, unner de sink be clean.  May I get de money an' go to the movin' picture now?"

An' Boudreaux say, "Mais, fille [daughter], you not goin' be wit' you frien's today, because if you had really done did de clean unner de sink de way you was suppose to, you woulda done found you de money in dere!"

Sunday Selections was started as a way for bloggers to use photos that might otherwise just languish in their files.  The rules have been relaxed, and it is now simply a showcase for your photos, new or old, good or bad, although nothing rude, please.  It is now hosted by River at Drifting Through Life, but she is taking a blog break.  Elephant's Child is keeping the meme warm for her.

Grandma has very colorful taste, and she's been buying pots for her plants. 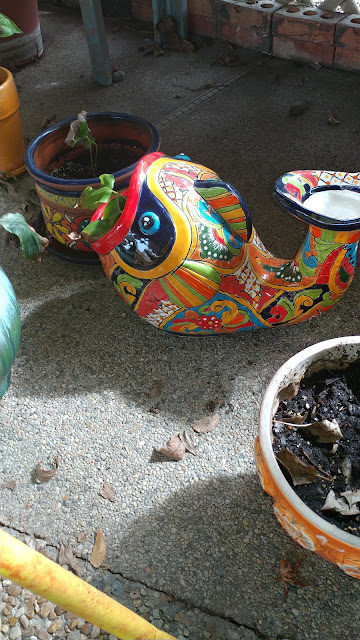 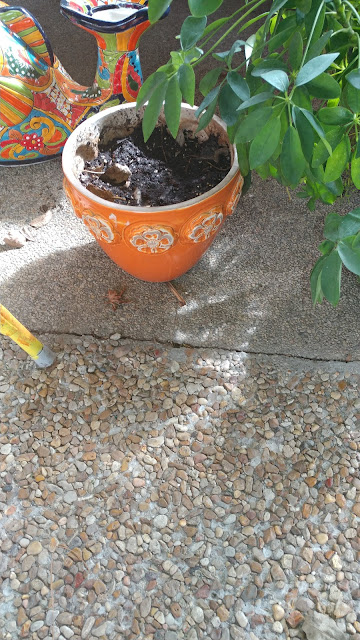 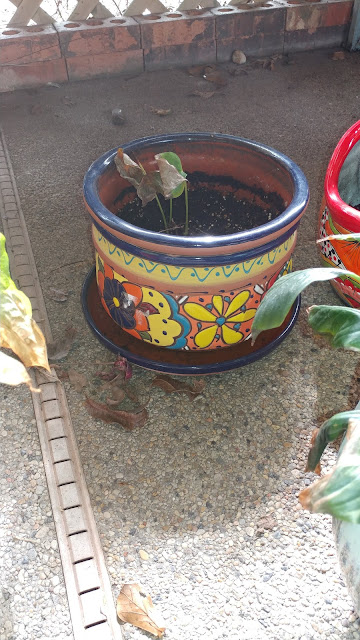 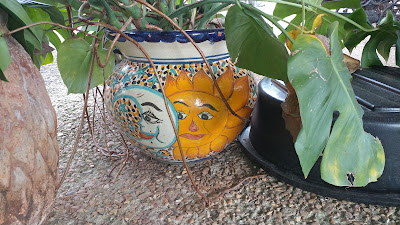 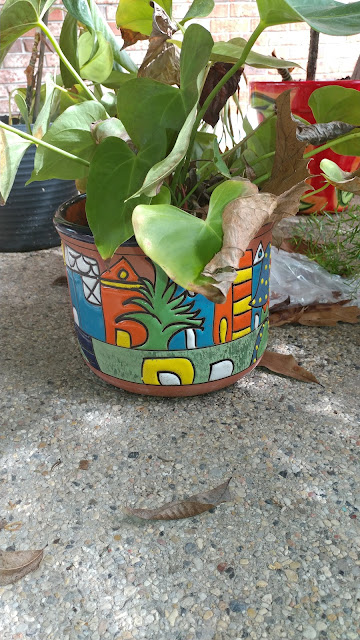 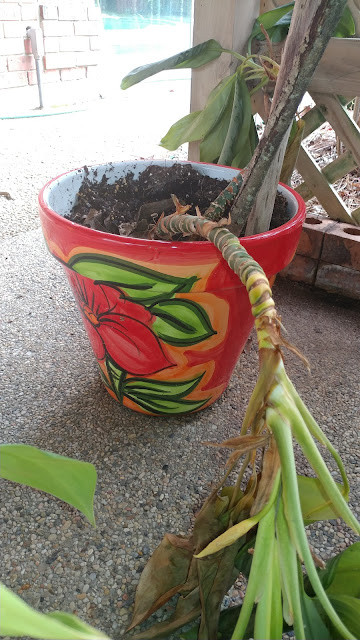 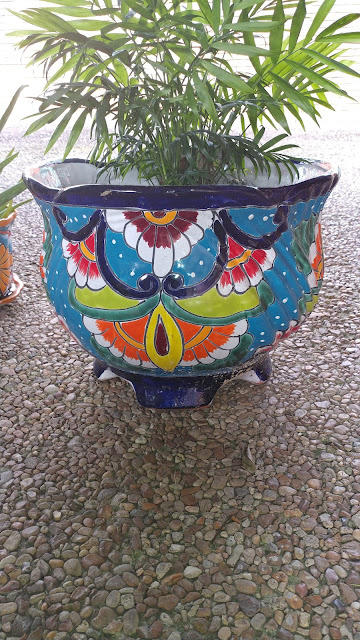 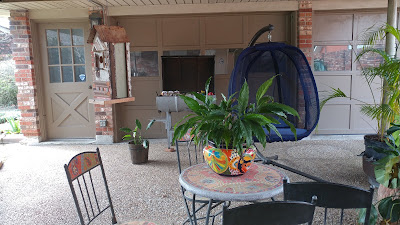 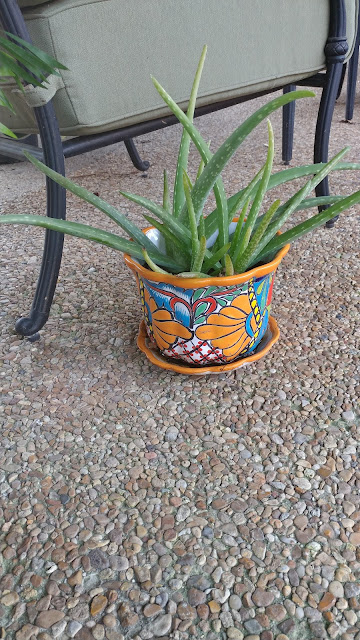 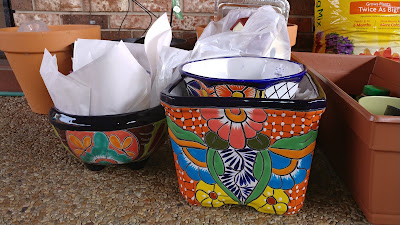 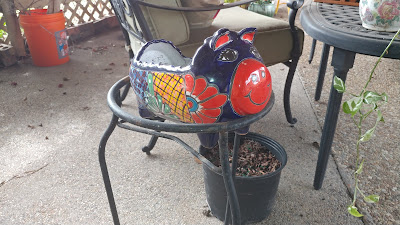 There are also a couple of fairy garden shots, and a bit from the workshop. 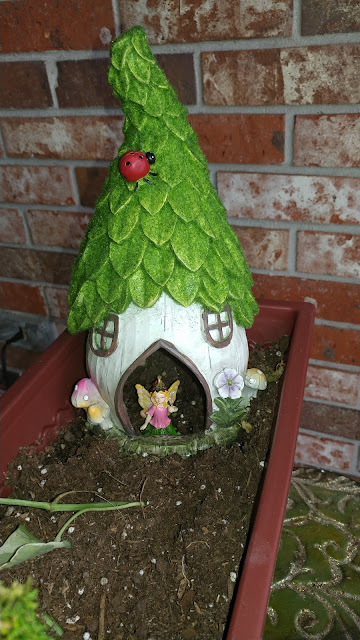 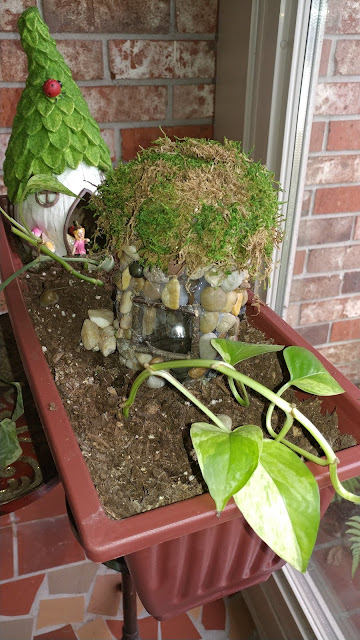 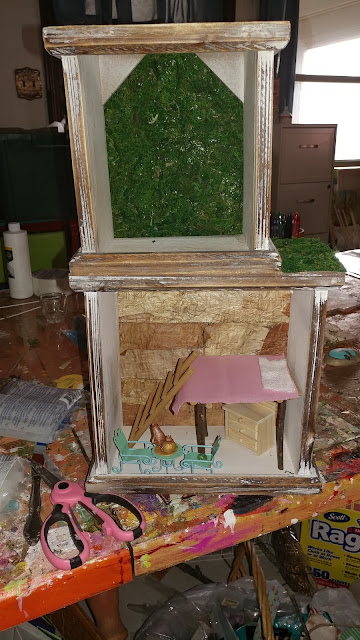 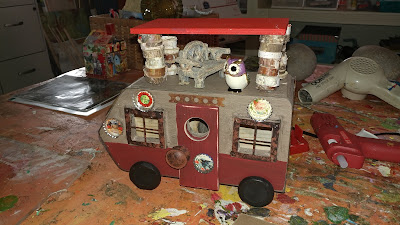 Four Chaplains Sunday -- Interfaith (by act of Congress, honoring the four chaplains of the Dorchester who gave their life jackets to others and went down with the ship on Feb. 3, 1943)

The Day the Music Died -- anniversary of the plane crash that killed Buddy Holly, Richie Valens, and The Big Bopper (J.P. Richardson)

Bartolomeu Dias of Portugal lands in Mossel Bay after rounding the Cape of Good Hope, becoming the first known European to travel so far south, 1488
The first paper money in America is issued by the colony of Massachusetts, 1690
Philadelphia establishes a "pesthouse" to quarantine immigrants, 1743
The Dutch States-General forbid the export of windmills, 1752
Spain recognizes US independence, 1783
The world's first commercial cheese factory is established in Switzerland, 1815
The sovereignty of Greece is confirmed in a London Protocol, 1830
The Wisconsin Supreme Court declares the US Fugitive Slave Law unconstitutional,1855
Emperor Meiji becomes the 122nd emperor of Japan, 1867
The 15th Amendment to the US Constitution, guaranteeing Black suffrage, is passed, 1870
Albert Spalding, with only $800, starts a sporting goods company, which eventually manufactured the first official baseball, tennis ball, basketball, golf ball, and football (American style football), 1876
Circus owner P.T. Barnum buys Jumbo the elephant, 1882
The 16th Amendment to the US Constitution, the income tax, is ratified, 1913
Canada's original Parliament building, in Ottowa, burns down, 1916
Percival Prattis becomes the first African-American news correspondent allowed in the United States House of Representatives and Senate press galleries, 1947
A plane crash near Clear Lake, Iowa kills Buddy Holly, Ritchie Valens, The Big Bopper, and pilot Roger Peterson and the incident becomes known as The Day the Music Died, 1959
British Prime Minister Harold Macmillan speaks of the "a wind of change" of increasing national consciousness blowing through colonial Africa, signalling that his Government was likely to support decolonisation, 1960
The unmanned Soviet Luna 9 spacecraft makes the first controlled rocket-assisted landing on the Moon, 1966
In Cairo, Yasser Arafat is appointed Palestine Liberation Organization leader at the Palestinian National Congress, 1969
New York Police Officer Frank Serpico is shot during a drug bust in Brooklyn and survives to later testify against police corruption, 1971
John Buster and the research team at Harbor-UCLA Medical Center announce history's first embryo transfer, from one woman to another resulting in a live birth, 1984
Astronaut Eileen Collins becomes the first woman to pilot the Space Shuttle as mission STS-63 gets underway from Kennedy Space Center in Florida, 1995
The New York Giants defeated the heavily favored and previously undefeated 18-0 New England Patriots in Super Bowl XLII, 17-14, in what is known to be one of the greatest upsets in sports history, 2008
Eric Holder becomes 82nd and 1st African American US Attoney General, 2009
Moscow has its heaviest snowfall in a day on record, killing one and bringing down 2,000 trees, 2018
Posted by messymimi at 12:00 AM

LOVE that colour. It would be impossible not to smile when you looked at those plants.
Re the man misses? A friend called a plumber about a persistent leak around the base of her toilet. Her partner was the culprit and the plumber told her he often got called for similar issues. Sigh.

LOL @ "and get enough hair to knit a litter of puppies if we needed one".

I like your granny's plant pots etc so colourful
that last one is so cute, have a colourfultastic Sunday :-)

That's a trick I wish I'd have thought of.

All those colorful pots sure are pretty!

I love colorful post too. They spice up everything.

Have a blessed Sunday. ♥

Now I have pot envy.
Except for the red pot with red flower - I actually own that one already. But the rest...

What great pots! My Mom used to have colorful pots like that-thanks for the great memories!
Love Barb

That was a good joke and a great idea for parents who want their kids to get chores done :)

Those are such pretty pots. What fun to have them all. Have a good week ahead.

Now I know that I am not the only one having to clean after the man misses. Money hidden under the sink is a great idea! Lol! Your grandma garden is fun, cheerful and interesting. These colourful pots will be very expensive over here.

I LOVE those colourful flowerpots and wish I could find some here. I'd probably have to visit a proper garden centre instead of the hardware stores. I also love that little campervan with the tiny owl on it :)

Love those bright colors, but the fish wins my award for the best. Also love the trap Boudreaux set for his fille.