"Well, son, in ancient Roman times, they didn't have those cool reflective metal signs like we have to tell you where you were and how far to the next town; instead they had big rocks, or stones, with the miles on them, I think mostly to tell you how far from Rome you were because Rome was the most important place."

"Then why were you talking to Mom about a milestone birthday, and she was telling you to keep it quiet?"

"Oh, we now use the word 'milestone' to mean something important or significant, like a big, important birthday."

"If it's so big and important, why was Mom telling you to keep it quiet?"

"Son, no man will ever fully understand women, but I can tell you these things and they will serve you well in life:  never forget your anniversary, always get her something for Valentine's Day, and under no circumstances, if you know what is good for you, reveal a woman's age if you happen to know it!"

Linking up with Denise at Girlie On The Edge Blog, where she hosts Six Sentence Stories, and the cue is Milestone.

Another nice fence in a neighborhood i happened to be going through: 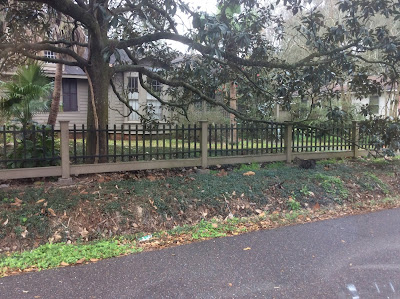 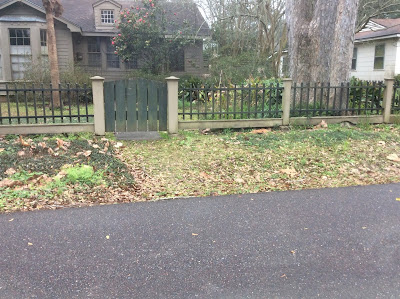 American Association for the Advancement of Science Annual Meeting -- Washington, D.C., US (a meeting of top scientist; who knows what these people will come up with next, because science is amazing! through the 16th)

International Quirkyalone Day -- a day to value your individuality, whether you are partnered or not, especially for those who prefer to be single and not dating just for the sake of dating

The annals of the monastery of Quedlinburg make the first known mention of Lithuania, 1009
Approximately 2,000 Jews are burned to death by mobs or forcibly removed from the city of Strasbourg, 1349
Roman Catholic emperor Leopold I chases the Jews out of Vienna, 1670
The United States Flag is formally recognized by a foreign naval vessel for the first time, when French Admiral Toussaint-Guillaume Picquet de la Motte rendered a nine gun salute to USS Ranger, commanded by John Paul Jones, 1778
James Cook is killed by Native Hawaiians near Kealakekua on the Island of Hawaii, 1779
John Jervis and Horatio Nelson lead the British Royal Navy to victory over a Spanish fleet in action near Gibraltar, 1797
The apple parer is patented by Moses Coats of Downington, Pennsylvania, 1803
US Supreme Court Chief Justice John Marshall declares that any act of the US Congress that conflicts with the Constitution is void, 1803
The original Quorum of the Twelve Apostles, of The Church of Jesus Christ of Latter-day Saints, is formed in Kirtland, Ohio, 1835
In New York City, James Knox Polk becomes the first serving President of the United States to have his photograph taken, 1849
Esther Hobart Morris is appointed the first female Justice of the Peace in the US, in South Pass City, Wyoming, 1870
A.G. Bell and Elisha Gray both apply for a patent for a telephone; Bell first by only 2 hours, and is ruled the rightful inventor, 1876
The first trainload of California grown fruit, oranges, leaves L.A. for the east,1889
Voting machines are approved by the U.S. Congress for use in federal elections, 1899
The Soviet Union adopts the Gregorian calendar, 1918
The League of Women Voters is founded in Chicago, Illinois, 1920
The Bank of England is nationalized, 1946
ENIAC, the first general-purpose electronic computer, is unveiled, 1946
The Knesset (Israeli parliament) convenes for the first time, 1949
Element 103, Lawrencium, is first synthesized at the University of California, 1961
The first of 24 satellites of the Global Positioning System are placed into orbit, 1989
Space probe Voyager 1 takes photograph of entire solar system , 1990
Near Earth Asteroid Rendezvous (NEAR) spacecraft becomes first vehicle to land on an asteroid (433 Eros), 2001
Love letters written between poets Elizabeth Barrett and Robert Browning are published online by Wellesley College and Baylor University, 2012
The Ivanpah Solar Electric Generating System, now the world's largest solar energy plant, opens in the Mojave Desert; the $2.2 billion plant, owned by Google, NRG Energy, and BrightSource energy, spans five square miles and can provide power to 140,000 homes, 2014
Posted by messymimi at 12:00 AM