Left Behind (Wordless Wednesday) and Making Me Crazy (Words for Wednesday)

Doc, when you were operating, i think you forgot something: 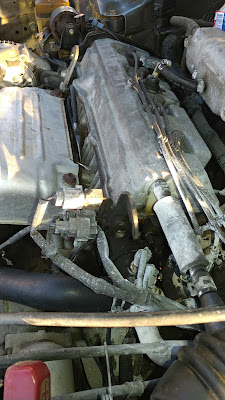 "Those NUNS will be the end of me yet," he whispered through gritted teeth.

"Well, they aren't much COMPANIONSHIP, I agree, but they do seem very COMPLAISANT and cooperative," his co-worker answered mildly.

"They act that way, but to my mind they are CLUTCHING at every opportunity to be the BEDEVILMENT of our purposes for having them here at the INSTITUTE.  Just today, their Abbess or Mother or whatever they call her was telling me that the way the water runs off the EAVES of the building they use for a chapel was causing trouble when they go to prayer!"

"The COMPUTER model of our work suggests they shouldn't be here too much longer, and if we win the COMPETITION, it will be all worth it."

"Well, that CONCOCTION they invented that we brought them here to make for us better come through, or the SPLAT you hear will be me doing something drastic, and I will claim EXTENUATING circumstances."

European leaders, in an attempt to end war "for all time", outlaw the crossbow, 1146
One of the largest naval battles in history, during the last decade of the ailing, Mongol-led Yuan Dynasty, begins between the forces of two Chinese rebel leaders, 1363
Capture of the entire Dutch fleet by British forces under the command of Sir Ralph Abercromby and Admiral Sir Charles Mitchell, 1799
Founding of Melbourne, Australian, 1835
Founding of Houston, Texas, 1836
Hubert Cecil Booth patents the vacuum cleaner, 1901
The Lake Pontchartrain Causeway in south Louisiana, the longest bridge over water (continuous, not aggregate) that is not also a viaduct, opens, 1956
The Hotline between the leaders of the U.S.A. and the Soviet Union goes into operation, 1963
Thurgood Marshall is confirmed as the first African American Justice of the United States Supreme Court, 1967
Guion Bluford becomes the first African American astronaut in space, 1983
NATO launches Operation Deliberate Force against Bosnian Serb forces, 1995
A commercial expedition to raise part of the sunken British luxury liner Titanic ended in failure, 1996
Harley-Davidson celebrates its 100th anniversary in Milwaukee with a parade of 10,000 motorcycles, 2003
India and Pakistan agree to release hundreds of fishermen and other civilians in each other's jails as part of their ongoing attempts to negotiate peace between their nations, 2005
Sumatra's Sinaburg volcano continues to erupt, two people are killed and 21,000 are evacuated from the vicinity, 2010
In Chile, 33 miners trapped half a mile beneath the surface make contact with their families for the first time in three weeks since the incidentally, 2010
Posted by messymimi at 12:00 AM

Loved your story for WFW. So happy you have joined the group. Not sure I like knowing that I am two years older than Louis Black:-(

Clever the way you wove all those words into a narrative!

That is an excellent story. I hope we get to find out what the nuns are there to make.
I no nothing about the insides of a car, so I don't see what shouldn't be there :)

As long as you don't have any parts left over when you put the engine back together, it all good! Thanks for stopping by Driller's Place.

Intriguing picture! Hope you are safe and dry.

You did really good with the words in your tale for WFW, I like it.

I love reading anything you write with word prompts. You're amazing.

I hate it when you forget to put something vital back.

I keep looking for a kitten hidden in that engine.

every day should be a kind day! xoxo

I don't think I want to know what he has planned that would make a 'splat' lol.

Love your story. And wish every week was devoted to kindness.

Great story, and great use of all those words. Welldone. Have a super day.

Awesome story. It was engrossing.

Enjoyed your take on the words Mimi
I too am wondering what the concoction is that will make splats - the mind boggles 😊
I always thought i was younger than Jean Claud Killy - oh well you can't win them all! ~ Cathy