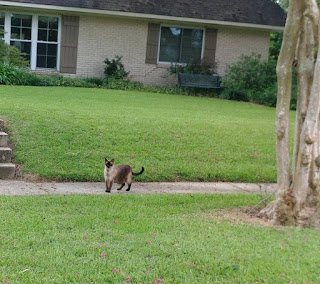 Great photo of Butch. Have a fantastic day!

Such a cute kitty. I wish I were lucky enough to have a cat live to be 20.

He's getting mighty old, but he looks really good.

He looks like he can still keep the neighborhood under control.

Wow, what a cute kitty! I'd love to live next door to him.

That is pretty darn good. 20 years old and still protecting the neighborhood. Good for Butch. Have a great day.

That's an unusually long life for a cat, isn't it?

Twenty is amazing. A friend of mine just told me that they said goodbye to their 21 year old feline last month. My Zephyr is 18 and I hope he still has some good time left.