Wordless and then Wordy Wednesday 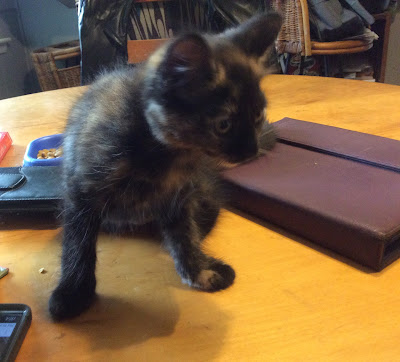 He walked in from his FISHING trip tired, hungry, and needing a SHAVE.  The sudden noise of everyone yelling "Surprise!" CONFUSED him and made him ALMOST jump out of his skin.

There was a "Happy Birthday" BANNER over the dining table that was decorated with FLOWERS and a cake with CANDLES all ready to be lit.  EIGHT of his friends were gathered, smiling with the knowledge that they had pulled it off.

He had the DESPICABLE thought of turning around, getting in his truck, and heading back down to his fishing camp.  He knew, though, that these people cared about him and were trying to do something nice for him.  With SUPREME effort, he resisted FROWNING and asked leave of them to take a quick shower.  He didn't let them see as he was PUFFING out his cheeks and shaking his head on his way down the hall.  He would come back and enjoy the party, and sleep in tomorrow.

Elvis Presley Day -- can you believe he's been gone 40 years?

Henry VIII defeats the French at the Battle of Guinegate/Battle of the Spurs, forcing the French to retreat, 1513
Jack Broughton formulates the earliest code of rules for boxing, 1743
Chang and Eng Bunker, the original "Siamese" twins, arrive in Boston to be exhibited, 1829
U.S. President James Buchanan inaugurates the new transatlantic telegraph cable by exchanging greetings with Queen Victoria of the United Kingdom, 1858
Arica, Peru (now Chile) is devastated by a tsunami which followed a magnitude 8.5 earthquake, 1868
Gold is discovered in the Klondike, at Bonanza Creek, 1896
Edwin Prescott patents the roller coaster, 1898
In Valparaiso, Chile, an 8.6 earthquake followed by fire destroys the city and kills 20,000, 1906
The first color sound cartoon, called Fiddlesticks, is made by Ub Iwerks, 1930
Democrats nominate Adlai E. Stevenson as presidential candidate, 1956
Joseph Kittinger parachutes from a balloon over New Mexico at 102,800 feet (31,300 m), setting three records that still stand today: High-altitude jump, free-fall, and highest speed by a human without an aircraft, 1960
A solar flare from the Sun creates a geomagnetic storm that affects micro chips, leading to a halt of all trading on Toronto's stock market, 1989
For only 2nd time Stanley Cup leaves North America (heads to Russia), 1997
In England, two men who created a Facebook site to incite violence during the riots are sentenced to four years imprisonment, 2011

*Yes, they celebrate a hot chocolate festival in the summer.  It all started when the 15th of August was a feast day on which the locals always drank a bit much, and the chocolatier of the town claimed his brew was a good remedy the day after.  The original festival on the 15th has ceased, but the hot chocolate is brewed to this day, served at 11am promptly.
Posted by messymimi at 12:00 AM

Happy birthday to the birthday person! Ha ha he was hoping to take a shower, take his dinner and hop onto bed....but all that have to put on hold as his dear friends are all there to celebrate his birthday!

Loved your story. I'm sure after a refreshing shower he'll be up to celebratidng.

That second cat photo looks just like my grand kitty, Missy Moo. I don't know, maybe she sneaks out at night and visits with you folks up in New Orleans ;)

liked the today in history- very interesting. Cute photos of the kitty too.

Such cute kitties. Great job with the word prompts. :)

Aww on the kitties. So cute.

Loved the great story from the word prompts. You do these so very well.

Good story and I could picture my husband and the way he would feel about a surprise birthday party. LOL

You're very good at this. Each of your stories could be expanded into something larger.

Good afternoon Mimi. I hope your day is a great one. See Ya.

I love your use of the words - and hope that his shower freshens him up enough to either enjoy the party - or to convince his friends he is.

Elvis Presley is my favourite singer

I could certainly celebrate Bratwurst Day, but someone else will have to attend the roller coaster celebration.

Thank you for joining us, I loved the way the words fit right in to your story.

I enjoyed your story. The time my family surprised me with a birthday party it took me a minute to get over my disappointment that we weren't going for High Tea at a swish hotel. Only a minute, mind.

I need to check out the challenge. You did very well with it! Love the WW cats, too. Hugs.