It's been a long week that ended October and started November, and rEcess was last night.

For any who may not know, rEcess is a program in which we let parents of special needs kids have a free night of babysitting so they can go out and just be a couple (or, in the case of a few single parents we've had in the program, just give the parent a break).

It's fun for the special needs kids, fun for their siblings, and i think we volunteers have the most fun of all.

So i am thankful for rEcess.  The couple who started the nationwide 99Balloons/rEcess program did so to honor their special needs son, Eric, who lived 99 days.  They turned their heartache into a way to help other parents, which is why we are able to be a part of it.

The couple who brought rEcess to our church had to move a few years ago, and they founded a group where they are living now, too.  They and the couple who are now in charge at our church have my deepest gratitude, it does not work without good leadership.

As the food coordinator, i am thankful for all the members of our church, Sunday school classes, and women's circles who provide food for the volunteers.  They make it easy to be the coordinator, and the food is always good!

Where Erin, the special child i get to pair up with each rEcess night, is concerned, i am grateful for root beer.  Erin adores her father, and at some point almost every rEcess night, she cries for her daddy.  Root beer is the cure for her tears and the tummy ache that often accompanies the tears, and it works every single time.

Erin is a sweet young lady who loves to Old Maid and Go Fish and games on the PBS Kids app on my tablet, and i'm thankful for the enjoyment we have playing together each month.

Our crafts lady, Marissa, always comes up with fun things for the children to make, and i'm grateful for her creativity.

Our church turns over a good portion of the campus to us on rEcess nights, and i am grateful that they let us bring the kids to run in the gym and play with the pool tables and use the Sunday school class toys and generally run rampant over the whole place.

Yes, we clean up after ourselves and put everything back, and i'm grateful that all of our volunteers take cleaning up as seriously as they take the more fun parts of the evening.

The church provides a security guard for us, and i am thankful for her being there, also that she comes in and has dinner with us.

Pajamas and movie time is how we wind down the evening, and i am grateful for the calm that comes after all the activity.

Mostly i'm thankful to be part of a community of people who want to be involved in a program like rEcess, who don't mind lifting kids out of wheelchairs and helping them crawl or walk, who don't mind tube feeding and diaper changing, who enjoy and look forward to running and playing with the non-handicapped siblings as well as tailoring activities to the special needs kids.

November is winding the year down, it's a great time to count blessings and be thankful.  Everyone is welcome to make a list and link up with the wonderful Ms. Josie's  Ten Things of Thankful.  By the way, we don't count to make sure you get to ten, we are just glad when you join in.

Here is my Peace Globe for Blog4Peace: 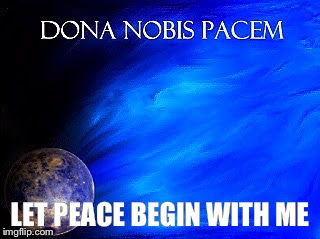 Fall Back Night -- all areas that end Daylight Saving Time tomorrow; set your clock back one hour before you go to bed and change the batteries in your smoke alarms/carbon monoxide detectors (Bermuda; Canada [most areas]; Cuba; Greenland [some areas]; Haiti; Mexico [Baja area]; Saint Pierre and Miquelon; The Bahamas; US [most areas])

Peddler's Village Apple Festival -- Lahaska, PA, US (fun for all, through tomorrow)

Unique 150 Hands-On Mystery Object Event -- Logic Puzzle Museum, Burlington, WI, US (come join the fun and use your brain puzzling out what these 298 mystery objects, many of them antique, are or used to do; through Nov. 19)

Verboort Sausage and Kraut Dinner -- Forest Grove, OR, US (beer and their famous sausage, as well as home-baked goods and fun)

The Flood of the Arno River causes massive damage in Florence, Italy, 1333
Joan of Arc liberates Saint-Pierre-le-Moûtier, 1429
Thomas Wolsey, English cardinal, arrested, 1529
Mozart's Symphony No. 36 is performed for the first time in Linz, Austria, 1783
The Erie Canal is completed with Governor DeWitt Clinton performing the Wedding of The Waters ceremony in New York Harbour, 1825
Benjamin Palmer patents an artificial leg, 1846
Dentist John Beers of San Francisco patents the gold crown, 1873
Tonga adopts a constitution, 1875
James Ritty patents the cash register, to combat the pilfering of the till by the bartenders in his Ohio saloon, 1879
London's first deep-level tube railway opens between King William Street and Stockwell, 1890
The Italian unknown soldier is buried in the Altare della Patria (Fatherland Altar) in Rome, 1921
Nellie Tayloe Ross is elected the first female US State governor, in Wyoming, 1924
The rebuilt Vienna State Opera reopens with a performance of Beethoven's Fidelio, 1955
Two-thirds of Florence, Italy is submerged as the River Arno floods; together with the contemporaneous flood of the Po River in northern Italy, this leads to 113 deaths, 30,000 made homeless, and the destruction of numerous Renaissance artworks and books, 1966
Genie, a 13-year-old feral child is found in Los Angeles, California having been locked in her bedroom for most of her life, 1970
The Netherlands experiences the first Car Free Sunday caused by the oil crisis, as the highways are deserted and are used only by cyclists and roller skaters, 1973
First conference that focuses exclusively on the subject of the commercial potential of the World Wide Web, in San Francisco, 1994
Israeli prime minister Yitzhak Rabin is assassinated by an extremist Orthodox Israeli, 1995
Chinese authorities arrest cyber-dissident He Depu for signing a pro-democracy letter to the 16th Communist Party Congress, 2002
Barak Obama is elected President of the United States, 2008
In Australia's Northern Territory in the lands of the Jawoyn people, archaeologists discover what is believed to be the world's oldest example of a stone ax, estimated at 35,500 years old, 2010
The Paris Agreement on climate change becomes effective, 2016
Posted by messymimi at 12:00 AM

These are very special people. I would be nervous and hesitate, but with someone like you I am sure I would catch on and be helpful in no time.

I love your peace globe, very true that peace begins with each of us. Wonderful thankful list too. I always enjoy reading about REcess, it is such an incredible thing.

rEcess is a good program to be part of. A break for the parents and also the kids get to meet people other than their family. Keep up the beautiful work. Have a happy weekend!

rEcess is something you love to do and I can hear that every time you talk about this program. You love those kids and they love you back.

Have a fabulous and peaceful weekend. ♥

That sounds like a group of wonderful people you have there and I am sure there is an extra large helping of thankfulness from the parents and carers of the kids - not to mention the kids themselves!

Now that Mrs. C. is retired she's looking for some way to volunteer, so I'm going to share your post with her and see if she might be interested in finding a similar program where we live.

Mimi, you are wonderful. We need more like you in the world. Thank you for all that you do and thr inspiration that you offer, just by being you. ☮ ♥

very excellent TToT showing the good that lies as potential in nearly all of us. the work and effort you (and the others) put into it is the key magical ingredient to an inspired idea.