Weeds are Flowers, Too, Once You Get To Know Them (Wordless Wednesday) and Words for Wednesday 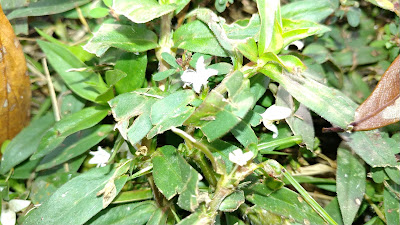 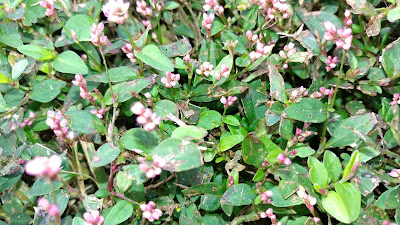 The beautiful FLOWERS inside contrasted sharply with the SLEET that was falling outside the window.  As she took a SIP of her hot tea, Alice was hit with a ZANY thought.

What, she thought, if I pretend to stage my own MURDER?  She almost laughed out loud at the thoughts that came.  It would be so DRAMATIC.  I could bring in a friend to make the DISCOVERY that I’d disappeared.  As is TYPICAL of my relatives, they would go nuts AGONIZING over whether I was really gone or not.  They would also, of course, OFFER to take over tending the house until I got back, and ransack it again looking for the science papers.

The thoughts of her relatives discomfiture had a STIMULATING effect on her, and she kept musing.  I could come up with a new name and identity, take out the patents in that name, and simply leave all of this drama behind me.

She giggled softly, a DISTINCT sound in the quiet house.  While she knew she would never really do that, the thought of it kept her laughing over the next few days.

Christopher Columbus notes the first recorded reference to tobacco, 1492
The NY General Assembly permits Jews to omit the phrase "Upon the faith of a Christian" from adjuration oaths, 1727
Charles Mason and Jeremiah Dixon begin surveying the Mason-Dixon Line between Pennsylvania and Maryland, 1763
The Articles of Confederation are adopted by the Continental Congress, 1777
Georgetown University, the first Catholic college in the US, opens, 1791
Zebulon Pike gets his first sight of Pike's Peak, Colorado, 1806
Isaac Pitman introduces his steno/shorthand system of writing, 1832
Union Major General Sherman burns Atlanta, Georgia, 1864
King C. Gillette patents the Gillette razor blade, 1904
The first telecast of an unscheduled event, a fire, takes place on W2XBT, in NY, 1938
In Columbus, Ohio, Dave Thomas opens the first Wendy's restaurant, 1969
Intel releases world's first commercial single-chip microprocessor, 1971
René Lévesque and the Parti Québécois take power to become the first Quebec government of the 20th century clearly in favour of independence, 1976
The Anglo-Irish Agreement is signed at Hillsborough Castle by British Prime Minister Margaret Thatcher and Irish Taoiseach Garret FitzGerald, 1985
An independent State of Palestine is proclaimed by the Palestinian National Council, 1988
The first Fairtrade label, Max Havelaar, is launched in the Netherlands, 1988
Cyclone Sidr hit Bangladesh, killing an estimated 5000 people and destroyed the world's largest mangrove forest, Sundarbans, 2007
Sony introduces the Playstation 4, selling a million units the first day, 2013
Posted by messymimi at 12:00 AM

Nice to know new words and different happening in the same date.

There is beauty everywhere!

Alice has one of those plans that only work well in your mind, it good to laugh...

You did really good with the WFW words and the story is also well done.

I am about to celebrate National Raisin Bran day. One of my favorite cereals. The word prompt is a great brain game. Have a blessed day.

We have lots of weeds here. Some are even pretty.

Some weeds are very pretty. They have the added benefit of being so hardy that even I can't kill them.

BTW I want to know about that patent.

That clever Alice, staging her death and taking the patent out under a new identity would be most clever. :)

Thanks for dropping by for a little visit.

great use of the words! and YES weeds are flowers too!

I wish flowers were as easy to grow as weeds

Loving your continuing story. I do hope Alice finds peace and contentment soon.

Weeds can be very pretty.

Wild flowers are my favorite ~ great photo and reminder about 'weeds' ~ and another informative post ! thanks!

What a story.
Never knew about King Gillette.

Ha! I'm actually ahead of the curve for clean out your fridge day. Thanks to two days of no power last week, of course, but I'm gonna call it a triumph anyhow. :-)

That sounds like a clever idea if she can pull it off.