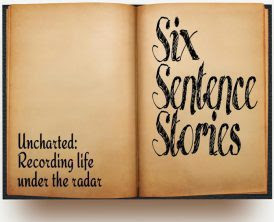 “Mom, when did you get here?” Julia asked, running to hug the figure in the doorway.

“Just a few minutes ago, and why am I not surprised that my eccentric father built a hidden room to hold his treasures?  Will you look at this,” she noticed the shelves on the wall and walked over, continuing “there was only one of them in the jewelry box and I’ve been wondering where the mate was to my mom’s favorite pair of earrings!”

“I’m Diane, by the way, Denarius’ daughter,” she said after picking up the earring, turning to Jonathan and Buddy.

“Why would Grandpa have had one earring down here and the other in the jewelry box he gave you?” Julia asked.

“Tell you what,” Diane said, “it’s late, lets go out and get dinner and we can talk, I think I’ve put together enough for us to be able to figure it all out,” and Buddy yelled, “I second that motion, I’m starving!”

Linking up with Zoe's Uncharted Blog, where she hosts Six Sentence Stories, and the cue is Mate.

(This is part of a continuing story.  If you wish to read the previous installents, click on the Jonathan page.)

Tori No Ichi -- Japan (the third and final "rooster day" of November, so called because it is held on the three days of the rooster this month, in which to wish good luck and prosperity at temple and shrine ceremonies around the country, and celebrate with a fair)

Like stepping into the middle of a very interesting dream!

Yes ? Why would he? More please!

A little bit of a mystery here...

still such a nicely building story ... half pair of earrings, what could be more intriguing?

I am following the story. Nice fence and garden.

I'm loving the story, but have no idea what's going to happen next. That's a good thing.

Love the fence. Love the church.

You're such a tease. I want to know what Grandpa was up to.

Will we ever be able to read it in its entirety, you know, in a book form?

And the mystery continues. I love being able to come back to this story now and again.