My "Spark" for the day is from an organization called Manners of the Heart, from their Business of Manners division.  If you want to do business with good manners, these are the things you have To Know: 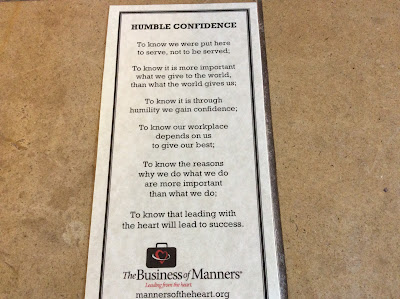 Peppercorn Ceremony -- St. George, Bermuda (commemorates the renting of what is now the Old State House by the Masonic Lodge to the governor of Burmuda for the cost of one peppercorn per annum, now a well attended festival)

Talk Like Shakespeare Day -- on The Bard's attributed birth anniversary

World Book & Copyright Day -- UN (this date chosen because of how parts of Spain celebrate St. George's Day, with books)
World Book Night -- Germany; Ireland; UK; US (anniversary of the birth and death of Shakespeare, and the death of Miguel de Cervantes; over 20 book titles have been specially chosen for this year and special editions of those books printed so you can share books and your love of reading with those who don't read much

The founding of the Order of the Garter by King Edward III is announced on St George's Day, 1348
William Shakespeare's The Merry Wives of Windsor is first performed, with Queen Elizabeth I in attendance, 1597
The first public school in the United States, Boston Latin School, is founded in Boston, Massachusetts, 1635
Connecticut is chartered as an English colony, 1662
Canada issues its first postage stamps, 1851
The Vitascope system of movie projection debuts the first motion picture at Koster & Bial's Music Hall in NYC, 1896
Namibia becomes the 160th member of the UN and the 50th member of the Commonwealth of Nations, 1990
Eritrians vote overwhelmingly for independence from Ethiopia, 1993
Beijing closes all schools for two weeks because of the SARS virus, 2003
The gamma ray burst GRB 090423 is observed for 10 seconds. The event signals the most distant object of any kind and also the oldest known object in the universe, 2009
Despite an initial ban on the film 'Borat,' Kazakhstan issues and official 'thank you' to actor Sacha Baron Cohen for his character, Borat Sagdiyev, 2012
Posted by messymimi at 12:00 AM

A tiny but Terrific handful.

A-Z of My Friend Rosey!

Such a cute kitten. Great picture. You all have a fantastic day.

What else can I say except cute, cute, cute just like me. LOL. Have a great day Mimi. See ya.

Little Sister is adorable and a handful too. Aren't most of them.

I love your Sparks. So true. Many people haven't a clue.

Have a purrfect Awww Monday and may your day be filled with blessed Sparks. ♥

Excellent 'Sparks'. The entitled generation can learn something from this wonderful list of work & life ethics. Thanks for sharing & inspiring!

Little Sister is a sweetie. Makes me want a kitten but I don't dare. Enough cats already and all are fixed.

Little Sister is so cute!

I'd be disappointed if I lived in Spain. I'd want a book, not flowers. Though I suppose both are nice. :)

Mimi, I adore you. Thank you for being my friend, even when I seem scarce. Please know that I am here and I do read. I will get back to a routine. But, I sure do appreciate you. You rock. HUGS.

Wow, what a lot of useful information! I love the very cute tiny handful and also the Spark for the day. My main resolution or goal for the year is to add more light to the world, so I am very happy to find your blog!