Just because Sandee of Comedy Plus is no longer hosting Silly Sunday does not mean i will quit telling Cajun jokes.

One day Gauthier call Boudreaux an' say, "Boudreaux, I needs fo' you to talk to you boy, Tee."

"Mais, what he done did now?" Boudreaux ax.

An' Gauthier say, "He done come by de paper office after school an' pay fo' a classified ad."

"Dat be what we want to know," say Gauthier.  "He done come in an ax us how much it be to print ten words, an' when we tol' him, he say 'Dat goin' be my whole 'llowance fo' de month, but it be worth it.'  Den he done ax us to print de words, 'Authenticate, Perspicacious, Tertiary, Insolent, Unmediated, Plenipotentiary, Bifurcated, Contentious, Obstreperous, Extolled.'  We goin' do it 'cause he done paid an' dey don' be words we cain't have in de paper, but we all want know why he want dem words enough to pay fo it."

So Boudreaux call Tee come in an' he tell him, "Gauthier done call me an' tell me 'bout you wantin' de ad in de paper."

"Mais, no, you ain't done nothin' wrong, we jes' want know what fo' you be willin' to pay for all dem big, fancy words to be in de paper."

An' Tee say, "Well, you know we get a paper in de school fo' to read an' discuss in de English class, an' my English teacher done say whoever can find dem ten words in the paper dis semester is goin' get an A, so now I know I be goin' find dem!"

One of the children at rEcess showed me this is it numbers/is it letters trick.  If you cover the top of the paper, it shows something different than when you see the whole thing: 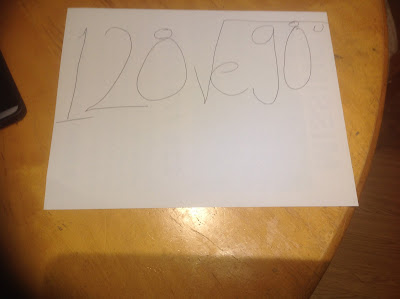 Fast Food Day -- the first franchised McDonald's opened this day in 1955 in Des Plaines, IL, US

National Pet ID Week -- the third full week of April, you are reminded to make sure your pets are microchipped or have an ID tag, just in case

Rubber Eraser Day -- today in 1770, Joseph Priestly described a vegetable gum which had the ability to rub out pencil marks

Take a Wild Guess Day -- sponsored by Jim Barber as a day to honor guesses, hunches, inspirations, speculations and other forms of “intuitive intelligence”

Gallaudet University is founded, 1817 (first US public school for the deaf)

Pope Innocent III refuses to grant permission to the Jews of Cordova, Spain, to build a synagogue, 1250
Samuel Johnson's A Dictionary of the English Language is published in London, 1755
The first school for the deaf in the US opens in Hartford, Connecticut, 1817
The last day US silver coins are allowed to circulate in Canada, 1870
Harley Proctor begins producing Ivory Soap, 1878
General Electric Company is incorporated, 1892
The Titanic sinks, 1912
Insulin becomes available to diabetics, 1923
Rand McNally publishes its first road atlas, 1924
Jackie Robinson debuts with the Brooklyn Dodgers, 1947
White Rock, British Columbia officially separates from Surrey, British Columbia and is incorporated as a new city, 1957
Tokyo Disney Resort (and the Tokyo Disneyland park) opens in Tokyo Bay (Japan), 1983
Upon Hu Yaobang's death, the Tiananmen Square protests of 1989 begin in the People's Republic of China, 1989
Representatives of 124 countries and the European Communities sign the Marrakesh Agreements revising the General Agreement on Tariffs and Trade and initiating the World Trade Organization, 1994
Astronomers at San Francisco State University announce the discovery of the first multiplanet solar system besides our own, three planets around Upsilon Andromedaie, 1999
Volcanic ash from the eruption of Eyjafjallajökull in Iceland leads to the closure of airspace over most of Europe, 2010
In a Schrodinger's cat experiment, researchers in Japan and Australia successfully teleport wave packets of light; this is the first transfer of quantum information from one point to another, 2011
Nokia announces that it will purchase Alcatel-Lucent for $16.6 billion, creating the second-largest manufacturer of mobile communication products behind Ericsson, 2015
Posted by messymimi at 12:00 AM