A to Z: Catnip, Cats, Copies, and Circle, a Random Tuesday Post

It's Tuesday, and that means linking up with Stacy's Random Thoughts at Stacy Uncorked.

It's said that not all cats are affected by catnip, and i'm sure that is true for some households.

Here, the rate of catnip love is 100%.  #2 Son is the one who taught me that there are different varieties of catnip, with some being more desirable than others.

They all line up every morning to get their share, and Link and Dansig, best buddies, have a play fight after.  Yes, every single morning i am treated to this. 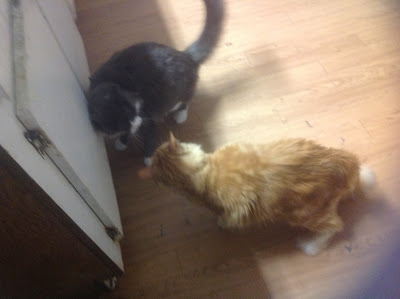 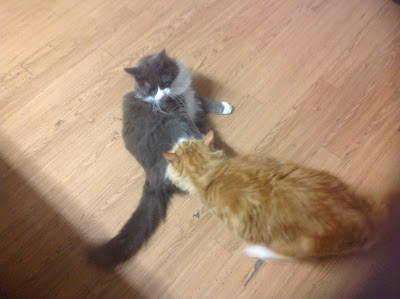 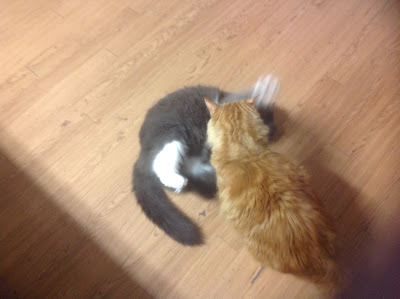 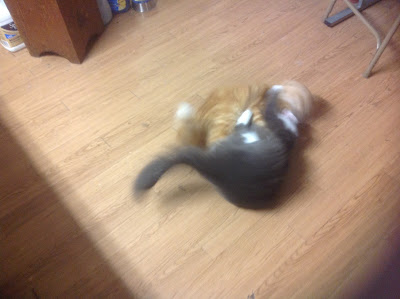 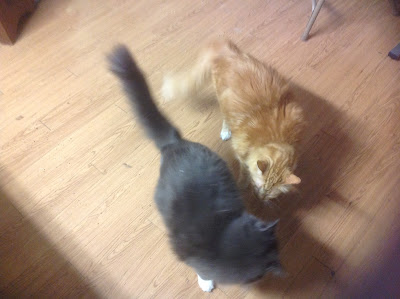 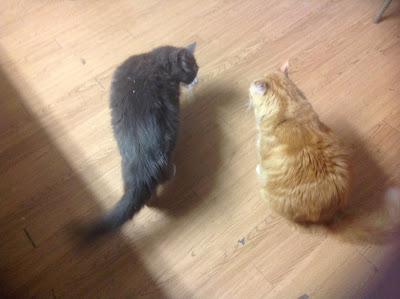 Once they are done, they usually wander off in a daze to sleep.

Yesterday was another copy day for Dr. D.  She is out of town, and phoned me while i was at the house working.  We searched for files, figured out what she needed, and i went to copy and scan it all and send it to her in an email.  She needed to review some reports so she could call her attorney and instruct him to be certain to ask specific questions in the deposition he is doing later this week of one of the witnesses to the fire.  She's not an attorney, but she knows her stuff, researches things and brings them to her attorney's attention.  Yes, she has run through several attorneys, they have a hard time keeping up with her.

Today is the Ladies Circle meeting, we are on Chapter 12 of The Reason for God by Timothy Keller, and i can highly recommend it.  Read it with a group, discuss it, and have finger sandwiches and petit fours after.  You won't regret it, i promise.

(Check out other A to Z participants here.)

Anniversary of the Second Republic -- Republic of Guinea

Don't Go to Work Unless it's Fun Day -- and unless you have a really great job, we know your decision

Find-A-Rainbow Day -- a day to paint bright and colorful wishes for your friends, family, and sweetheart; if you actually find a rainbow in the sky, that's a plus, send a pic to the RainbowBrite site

Overcome a Handicap Day -- on the day, in 1981, when one-legged Canadian high jumper Arnie Boldt cleared 6 feet 8¼ inches, only about a foot under the world record at the time

Tweed Day -- a day to consider the costs of political corruption, on the birth anniversary of "Boss" Tweed

Isle Royale National Park is established in Michigan, US, 1940
Edward the Confessor is crowned King of England, 1043

Edward the Confessor is crowned king of England, 1043
The US Pony Express begins its first run, 1860
Gottlieb Daimler receives a German patent for his engine, 1885
Trial of the libel case instigated by Oscar Wilde begins, eventually resulting in his imprisonment on charges of homosexuality, 1895
The US House of Representatives accept the "American's Creed," a patriotic contest winner by William Tyler Page, as the official creed of the US, 1918
The building of the RMS Queen Mary is commissioned, 1929
President Harry S. Truman signs the Marshall Plan, 1948
Martin Luther King Jr. delivers his "I've Been to the Mountaintop" speech, 1968
The first portable cell phone call is made in New York City, 1973
Bobby Fischer refuses to play in a chess match against Anatoly Karpov, giving Karpov the title of World Champion by default, 1975
Conventional-Train World Speed Record: a French TGV train on the LGV Est high speed line sets an official new world speed record, 574.8 km/h (357.2 mph), 2007
Australia formally adopts the United Nations Declaration on the Rights of Indigenous Peoples, 2009
Following the News International phone hacking scandal, James Murdock resigns as Chairman of BskyB, 2012
Posted by messymimi at 12:00 AM

We have never had a cat who showed the remotest interest in catnip. I wonder whether we only get inferior varieties.

I've never had a cat, so the nearest I've come to catnip is an occasional catnap when I'm sleepy! Informative and entertaining as ever.

My Friend Rosey - C is for Cycling

That does look like some special catnip. Some of the cats around here like the nip and some just don't care. You all have a fantastic day.

Watching a cat bounce a catnip filled toy around is entertaining stuff. I wonder if they make something like for people, you know get a rush then crash into a coma-like state until the alarm clock goes off. That's what DH needs since he has trouble sleeping through the night. Ooo, find a rainbow sounds fun! I like the idea of playing with splashes of color. Please join for another edition in A2Z iPad Art Sketches Through the Alphabet series. ;)

I love your choice for C :) Your kitties are adorable. We grow catmint instead of catnip and our cats love it- that is what is in all the toys I make too.

You know Mimi, I thought catnip was just a make thing. I didn't know it was for real. Wow!
Have a great day my friend. See ya.

I would love to watch your two have a catnip play fight each morning. How fun.

What a fun post. Your life is anything but dull.

So much info! Wow! Love, love your playful kitties photos!

Happy Days,
A ShutterBug Explores,
aka (A Creative Harbor)

You have them hooked on that stuff!

Love the catnip pictures :-) We've had cats that love it and cats that could care less about it.

We have an official creed?

Love seeing your cat antics! :) Our cats love catnip - thanks for reminding me I have a stash I should share with them. ;)

I have heard of cats not affected by catnip but never seen one. Love that your cats love the catnip so much! How fun to watch them every day!