The situation was on the verge of becoming dire.

She could foresee a day in the near future when she would not be able to work, not because of physical inability to do the work or lack of a job, but because she wouldn’t be able to get there from of a lack of transportation.

Public busses in the area were ill run and inadequate, and she’d be unable to bring her equipment and supplies with her that way, even if the bus routes ran near where she was going.

Confiding in a few friends that she felt like a gerbil in a wheel, always running faster and faster but never able to make progress, was very difficult for her as she’d always just worked harder or taken on more to try to get through.

Finally she was near the wall, unable to add more work, unable to tap into any more resources, knowing if the car went out again she’d be sunk.

The confiding opened the floodgate and a vessel of mercy stepped forward, giving her a gift that bought one more repair.

Linking up with Denise at Girlie On The Edge Blog, where she hosts Six Sentence Stories, and the cue is Vessel.

A few months ago, i took a shot of this gate/fence on a very foggy day, and it looked rather spooky.  Here it is in the early morning sunshine, a very different feel: 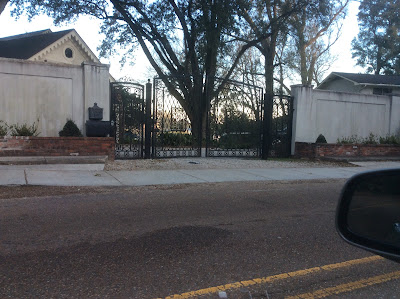 The Mongols burn the Russian city of Vladimir, 1238
Edward of Carnarvon,later Edward II, becomes the first English prince to hold the title Prince of Wales, 1301
The bonfire of the vanities occurs in which supporters of Girolamo Savonarola burn thousands of objects like cosmetics, art, and books in Florence, Italy, 1497
King Philip II forms an inquistion in South America, 1569
Academie Francaise begins a Dictionary of the French Language, 1639
An 8.2 magnitude earthquake shakes New Madrid, Missouri, 1812
The colonial Tasmanian Parliament passes the Electoral Act of 1856, the first piece of legislation anywhere in the world providing for elections by way of a secret ballot, 1856
The Battle at Ingogo, Transvaal: the Boers defeat superior British forces, 1881
The Great Blizzard of 1891 begins, 1891
Émile Zola is brought to trial for libel for publishing J'Accuse, 1898
Baltimore catches fire; 1500 buildings are destroyed in 80 blocks, 1904
The Mud March, the first large procession organized by the National Union of Women’s Suffrage Societies (NUWSS), 1907
Charlie Chaplin debuts "The Tramp" in "Kid Auto Races at Venice," 1914
The first wireless message sent from a moving train to a station is received, 1915
Bert Hinkler begins the first solo flight from England to Australia, 1928
Pluto moves inside Neptune's orbit for the first time since either was discovered, 1979
Astronauts Bruce McCandless II and Robert L. Stewart make the first untethered space walk using the Manned Maneuvering Unit (MMU), 1984
The Central Committee of the Soviet Communist Party agrees to give up its monopoly on power, 1990
Haiti's first democratically-elected president, Jean-Bertrand Aristide, is sworn in, 1991
The Maastricht Treaty is signed, leading to the creation of the European Union, 1992
Crown Prince Abdullah becomes the King of Jordan on the death of his father, King Hussein, 1999
Bushfires in Victoria left 173 dead in the worst natural disaster in Australia's history, 2009
In Europe, ready-meal manufacturer, Findus, withdrew its beef lasagne meals from supermarkets after confirming beef supplied by French manufacturer, Comigel contained horsemeat, 2013
All citrus fruit can be traced to the southeast foothills of the Himalayas, according to DNA study published in Nature, 2018
Posted by messymimi at 12:00 AM

I do hope that repair is the last one needed. And love your story.

I waiting for the shop to open after the new year celebration to repair our cars again. Sigh! I wonder what lies beyond the gate.

Excellent six. I love to see people stepping up to the plate when someones in need.

Fortunately, I just bought a Charles Dickens book this weekend. (The journals of his travels to America and to Italy.) I shall be sure to read at least a chapter this evening...

That story is too close to home. I'm glad you got one more repair in.

Have a fabulous day my friend. ♥

Wonderful story which you always do Mimi. Well done. See ya my friend.

This took me to a familiar place and if this is the reality faced, my prayers blast for you. Heartful Six.

A true story. I am glad you can afford another repair.

That is an awful place, the wall. How uplifting that kindness came at a time most needed.

Good fence shot. Have a wonderful week ahead

Nicely told six. I think most can relate to this story, of scrabbling to stay afloat.