Yesterday, because Mr. BA is out of town and because i will be out of town next Saturday, i went to see Grandma again.  Little Girl, who will be on Army duty the whole rest of the month of June, went with me.

Grandma is not happy because the local newspaper will no longer be carrying some of her favorite comic strips, so i helped her set up an account with a service that will email them to you every day.  While helping her with the set-up, she got a bit frustrated with some of the aspects of it, but we got through.

Boudreaux done be fed up wit' de computer stuff, an' he be complainin' to Thibodeaux, 'special 'bout how hard it be to come up wit' de password.

Den a few day later, he be sayin' he goin' set up de new account fo' som'pin, an' Thibodeaux say, "Do you want some he'p figurin' a new password?"

Thibodeaux say, "How you do dat?"

An' Boudreaux say, "Mais, I jes' done change ever' password I gots to use to 'Incorrect' and when dey tell me my password be incorrect, that make me remember what my password be!"

From the last couple of days, there's needlepoint and cross stitch art from a client's house: 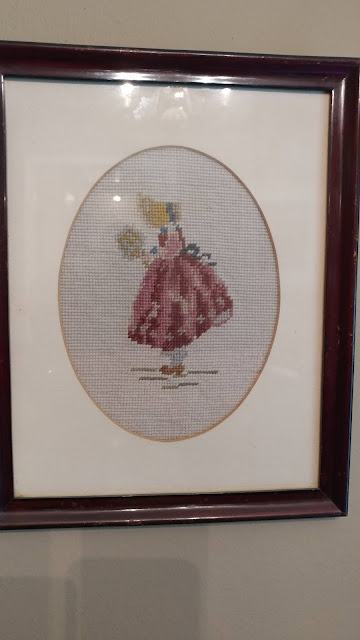 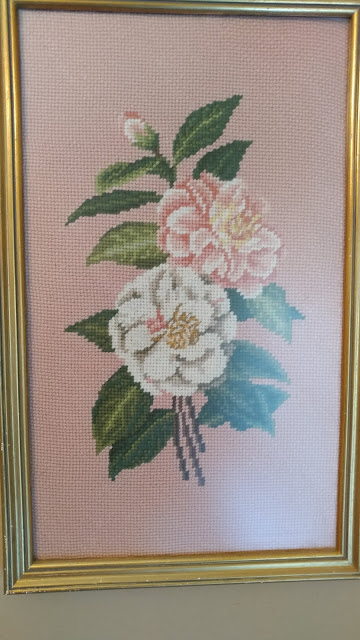 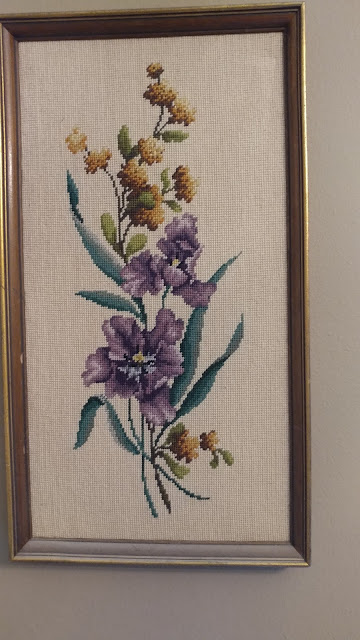 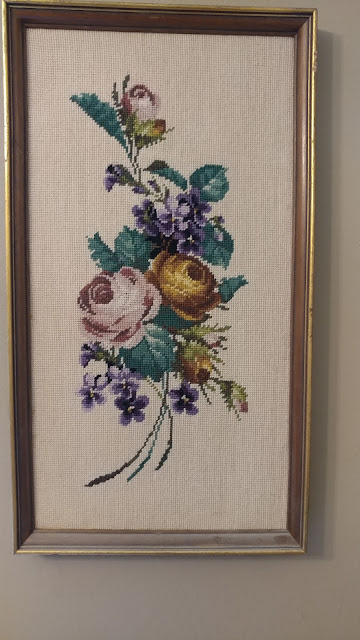 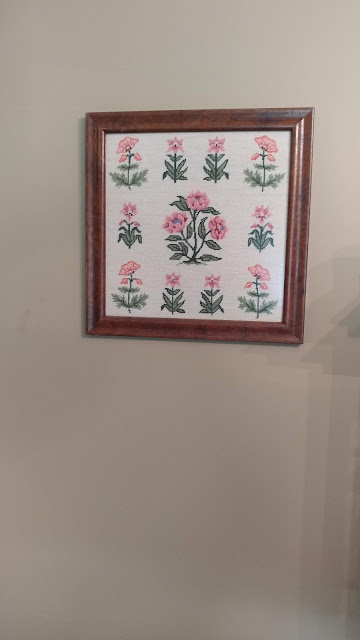 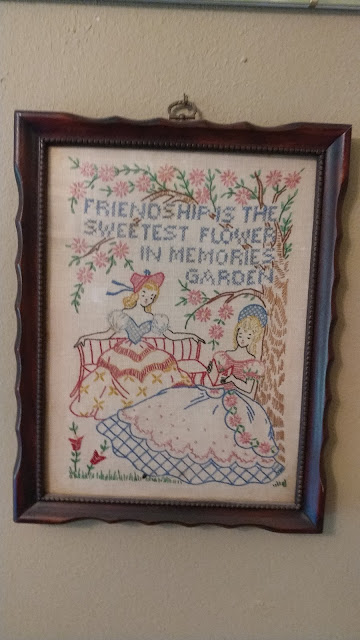 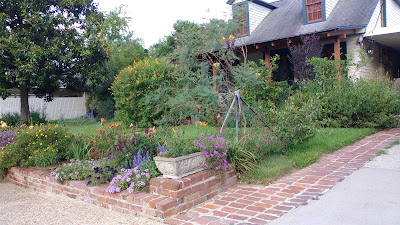 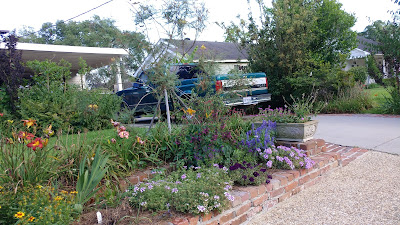 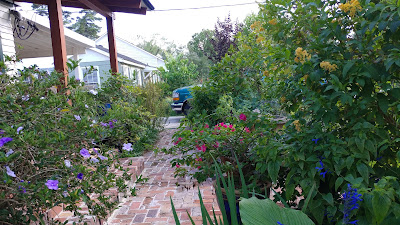 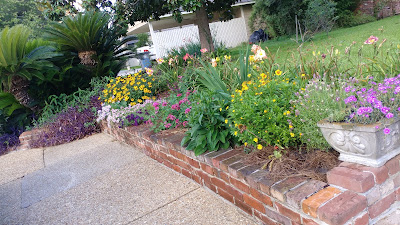 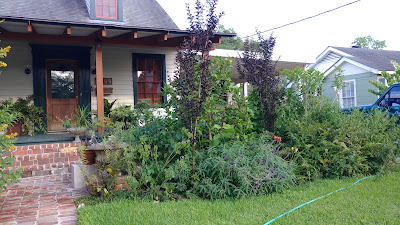 Oliver being brave (he is terrified of me, and coming out to get his share of the canned food while i was anywhere near is very brave indeed, and Abigail, Friend of Everyone is lying on the carpet): 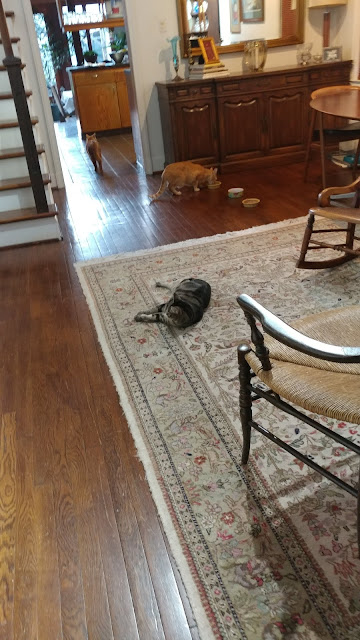 The raccoon that Ms. GA has to feed because otherwise it would fight the cats for grub (even got a very bad surreptitious shot of him washing his food in the water bucket): 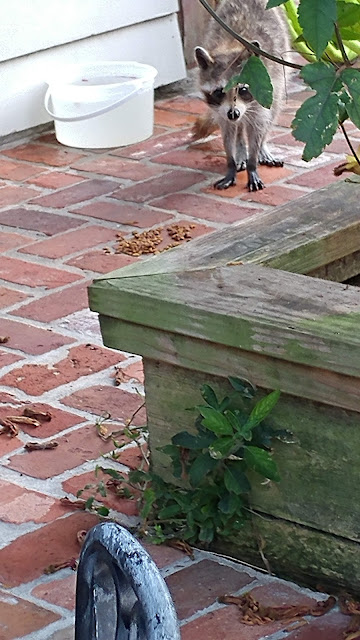 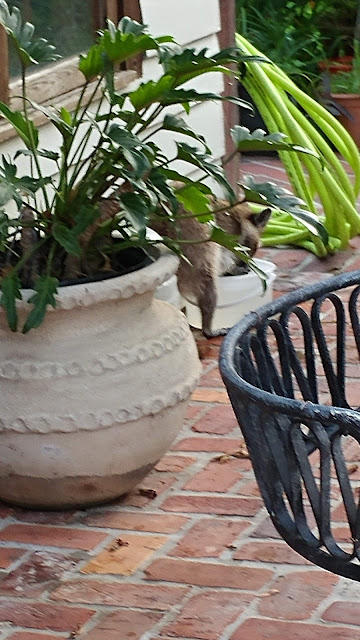 And finally, Grandma is painting lots of rocks now: 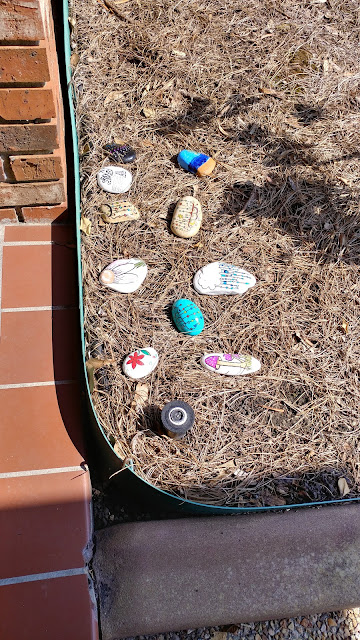 Celebration of the Arts -- Community Center, Yorba Linda, CA, US (fine arts and music festival for all ages)

English Riviera International Dance Festival -- Torquay, Devon, England (learn ballroom dance, or take a master class, all levels are welcome, with Gala Evenings where you can dance the night away; through the 7th)

U.S. President Grover Cleveland marries Frances Folsom, 1886 (only president to wed in the executive mansion)
Elizabeth II is crowned Queen of the United Kingdom, Canada, Australia, New Zealand and Her Other Realms and Territories & Head of the Commonwealth, 1953 (the first major international event to be televised)

The Vandals enter Rome and begin 2 weeks of plundering, 455
The First Siege of Antioch ends when Crusader forces take the city, 1098
The first Récollet missionaries arrive at Quebec City, from Rouen, France, 1615
Bridget Bishop is the first person to go to trial in the Salem witch trials in Salem, Massachusetts, 1692
The Derby horserace is held for the first time in Epsom, England, 1780
P. T. Barnum and his circus start their first tour of the United States, 1835
The Slavic congress in Prague begins, 1848
Guglielmo Marconi applies for a patent for his early radio device, 1896
U.S. President Calvin Coolidge signs the Indian Citizenship Act, making Native American Indians withing US territories and states US citizens, 1924
Lou Gehrig begins his streak of 2,130 consecutive games played, 1925
In a referendum, Italians vote to turn Italy from a monarchy into a Republic, and exile their king, Umberto II di Savoia, 1946
The USSR and Yugoslavia sign the Belgrade declaration and thus normalize relations, 1955
Surveyor 1 lands in Oceanus Procellarum on the Moon, becoming the first U.S. spacecraft to soft land on another world, 1966
Pope John Paul II visits his native Poland, becoming the first Pope to visit a Communist country, 1979
The Bhutan Broadcasting Service brings television transmissions to the Kingdom for the first time, 1999
Europe launches its first probe to voyage to another planet, Mars, 2003
The World Health Organization announces the E. coli strain responsible for the 2011 E.coli O104:H4 outbreak had never before been isolated from patients, 2011
The US Congress passes new legislation to reform National Security Agency procedures, restricting gathering of phone records, 2015
One hundred volunters in Bhutan set a world record for tree planting, setting out 49,672 in 1 hour, 2015
Posted by messymimi at 12:00 AM