Veterinarians Can Be Very Punny (Wordless Wednesday) and Words for Wednesday 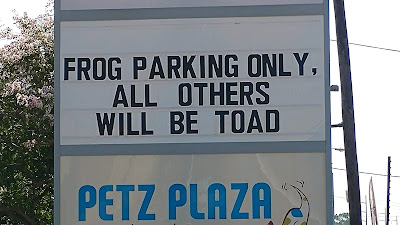 Here are this week's prompts.

She pulled the “POISON” out of the OVEN and inhaled the wonderful FRAGRANCE.  Of course, it wasn't really poisonous, but she had to make herself think of sugary concoctions that way.  BETWEEN the IMMEDIATE spike in blood sugar that always left her feeling tired and wrung out and the ROTTEN teeth she had by biology (thanks, mom, she always thought when it came up at the dentist), she had long ago decided the DUBIOUS reputation of table sugar meant she needed to abstain.

At first it had been HARD, especially when she was called upon to use her excellent culinary skills to make cakes, cookies, pies, and other desserts for every church function imaginable.  Over time, she'd found it was BECOMING easier, and now she could bake for the children at home or for others and not be tempted.

She pushed the LEVER that opened the trash can and dumped the last of the eggshells in.  Going back to the sink to finish the dishes, she smiled as the bird FEATHERS the children had brought in and set on the windowsill shone in the SUNSHINE.  It was going to be a beautiful day for a party.

Eid al Fitr -- Islam (celebration of the end of Ramadan; began sundown yesterday, runs through sundown on the 7th, although local dating and official government observances may vary)

Turtle Races -- Nisswa, MN, US (Wednesdays through August 21st, go race a turtle, it's only $5 to adopt a turtle for the race and get a participation racing button!)

Traditional date for the sinking of Atlantis, 8498BC
Titus and his Roman legions breach the middle wall of Jerusalem  in the Siege of Jerusalem, 70
Kraków, Poland  receives city  rights, 1257
The first Great Lakes steamer, the Frontenac, is launched, 1817
Houston, Texas is incorporated by the Republic of Texas, 1837
Denmark  becomes a constitutional monarchy, 1849
Harriet Beecher Stowe's anti-slavery serial, Uncle Tom's Cabin or, Life Among the Lowly starts a ten-month run in the National Era abolitionist newspaper, 1851
Denmark  amends its constitution to allow women's suffrage, 1915
Elvis Presley introduces his new single, "Hound Dog", on The Milton Berle Show, scandalizing the audience with his suggestive hip movements, 1956
The first government of the State of Singapore is sworn in, 1959
The Apple II, the first practical personal computer, goes on sale, 1977
Prime Minister of India Indira Gandhi orders an attack on the Golden Temple, the holiest site of the Sikh religion, 1984
A severe heat wave across Pakistan  and India  reaches its peak, as temperatures exceed 50°C (122°F) in the region, 2003
The planet Venus makes its last transit of the 21st century beginning at 22:09 UTC June 5, and ending 4:49 UTC June 6, 2012
The Swiss vote to reject the referendum to give each citizen a guaranteed income of $2,500 Swiss francs per month, 2015
Posted by messymimi at 12:00 AM