Grandpa had been quite worried about our every-other-week trip to the store yesterday.

"It's the weekend after Thanksgiving, isn't there something called 'Black Friday' and everyone shops?  Aren't the stores going to be very crowded?" he worried.

I explained that the specials are only on Friday, there probably wouldn't be too many people in the grocery store on Saturday, and he was quite relieved.  It turned out to be an easy shopping day and he was quite pleased.

Clothile an' Marie done be plannin' out de shoppin' fo' de big sales on Black Friday.  Boudreaux done come in an' hear dem plottin' dey strategy fo' which place to go firs' an' den after, an' Boudreaux say, "I t'ink you ladies be doin' dis Black Friday stuff all wrong."

"What you mean?" Clothile ax.

An' Boudreaux say, "Mais!  Instead o' plannin' to do all dat shoppin' on Black Friday, I t'ink you needs be complainin' to do stores how dey overcharge you de rest o' de  year!"

Sunday Selections was started as a way for bloggers to use photos that might otherwise just languish in their files.  The rules have been relaxed, and it is now simply a showcase for your photos, new or old, good or bad, although nothing rude, please.  It was hosted by River, who still participates, and is now hosted by Elephant's Child.    \

Bigger Girl has been embroidering her old, falling apart denim jacket into a work of art.  The skies have been overcast and gloomy almost all of the time, so only a couple of sky photos. 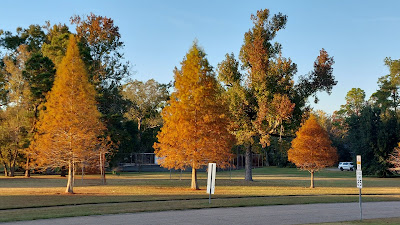 Get the Giggles and Give One Away Day -- internet generated, and great if you're a preteen girl